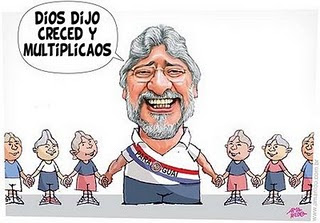 ASUNCION — Ousted Paraguayan President Fernando Lugo said on Friday he accepted Congress' decision to remove him from office after a lightning-quick impeachment trial.
Lugo, a former Roman Catholic bishop who was due to finish his term next year, urged supporters angered by his ouster to protest peacefully. In a television address, he said he already considered himself a "former president."
Lugo, a silver-haired former Roman Catholic bishop who quit the Church to run for the presidency, was found guilty of mishandling armed clashes over a land eviction in which 17 police and peasant farmers were killed last week.
In line with Paraguay's constitution, Lugo will be replaced by Vice President Federico Franco, who has been a fierce opponent of the president.
Lugo's rivals firmly control both congressional houses. The Senate voted 39-4 to remove him the day after Lawmakers in the lower house agreed in a sudden, near-unanimous vote to impeach him.
Several thousand Lugo supporters gathered outside Congress in the capital, Asuncion, and tried to break through police lines as the verdict was given. Police fired teargas and rubber bullets to disperse the crowd.
"This is an 'express' coup because (lawmakers) have done it in the wee hours of the night," Lugo told television station Telesur late on Thursday.
Lugo had refused to resign, resisting pressure from Church leaders to step down to ease mounting tension in the soy-exporting nation of 6 million people, one of the poorest and least stable in South America.
The next presidential election is in 2013 and Franco had been expected to run for office.
It was not clear whether Franco would be able to run next year if he assumes the presidency now because the constitution limits leaders to a single term.
Re-election has been banned since the constitution was overhauled following the 1989 fall of General Alfredo Stroessner's brutal 35-year dictatorship.
Lugo, 61, a mild-mannered leftist who speaks the Guarani Indian language, vowed to champion the needs of poor Paraguayans when he was elected four years ago, ending six decades of rule by the Colorado party.
The quickness of the impeachment trial raised concern among South American governments, which dispatched their foreign ministers to Asuncion late on Thursday. So me warned of possible sanctions if Lugo was ousted.
Publicado por Unknown en 6/22/2012 07:08:00 p. m.