Another International Bank Pulls Out of Cuba 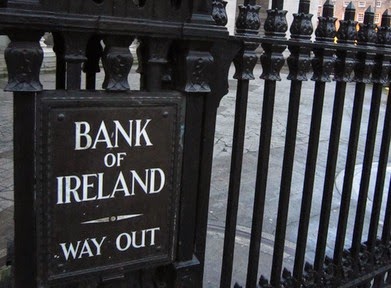 Laws are meant to be enforced.

As such, we are already seeing banks step up compliance (at best) or streamline their duplicity (at worst).

Case and point -- from the Irish Independent:

BoI bans trade with Cuba after US ruling

The Irish Independent has seen correspondence from the lender written to long-standing customers with legitimate business interests in Cuba telling them it can no longer process international transactions to or from the Caribbean island.

The ban comes as French bank BNP Paribas was hit with a $9bn (€6.5bn) fine by the US amid allegations it violated US sanctions involving Cuba, Iran and Sudan.

The US lender is bound by US regulations which ban payments being made to Cuba, Iran and Sudan, Bank of Ireland said.

Bank of Ireland confirmed that it had written to affected customers who are doing business with Cuba explaining that it could not process payments on their behalf.

"Our correspondent bank for all SEPA transaction is a leading US bank who must comply with its own regulatory requirements and obligations and to avoid a possible exposure to regulatory sanctions and penalties," Bank of Ireland said in a statement.

"As a result of the decision by our correspondent bank, we are not in a position to process such transactions.

"This affects all international payments to or   from Cuba and also any related  SEPA payments."

The Department of Finance said the decision was a commercial one for Bank of Ireland and declined to comment further.

Bank of Ireland would not disclose the name its correspondent bank, but said it did not have one handling euro-area payments before the introduction of SEPA earlier this year.

It is not clear why a correspondent bank is now required for transactions under SEPA and a Bank of Ireland spokeswoman declined to comment further when  asked if it had any plans to change  this arrangement.

It also declined to say how many of its customers were affected.

Cuba and Iran. In an unprecedented move, regulators banned BNP for a year from conducting certain US dollar transactions, a critical part of the bank's global business, in addition to the record-breaking fine.

In addition, the bank will need to prohibit all US dollar clearing as a correspondent bank for unaffiliated third-party banks in New York and London for two years.

The US has brought at least 22 cases against financial firms since 2009 for doing business or handling funds linked to sanctioned countries.

Penalties totalling $4.9bn have been levied against the 21 other banks since US President Barack Obama took office.

Most of those cases targeted overseas banks, with less than $90m in fines imposed on US firms.
Publicado por Unknown en 7/03/2014 04:55:00 p. m. No hay comentarios: Enlaces a esta entrada

BBC News
Altogether, it took 30,000 wooden pegs, 2,000 tons of soil and 2,000 tons of sand for artist Jorge Rodriguez-Gerada to create his stunning, 11-acre portrait of a little girl for the opening of this year's Belfast Festival at Queens. The enormous artwork, named "Wish" by Rodriguez-Gerada, is the largest land art portrait in the United Kingdom and Ireland, according to the Belfast Telegraph. Best visible by plane or helicopter, the portrait took 18 months of planning and one month of construction to complete.
"Wish wasn't something that just got presented, it was a process," Rodriguez-Gerada told the Telegraph. "Getting to know the city on multiple trips and letting the creative flow helped bring the image to me of what I wanted to do." The Cuban-American Rodriguez-Gerada is the Belfast Festival at Queen's first artist in residence. Known for his larger-than-life portraiture, one of Rodriguez-Gerada's first international successes was a large image of Barack Obama's face, completed in 2008 using 650 tons of sand and gravel spread out over 2.5 acres, reports the Irish Times.
For "Wish," Rodriguez-Gerada said he purposefully chose an anonymous child, spotted on a research trip to Belfast this summer.
“It was very important for me that the viewer has no idea if this girl is Catholic, Protestant, or other,” he told the Irish Times. “She is simply a beautiful child, her eyes staring out at the future, full of joy.” Visitors to the festival, which runs from October 17 to the 27, have the opportunity to view the artwork during special tours led high up on adjacent buildings, and can also walk through the portrait at ground level.
h/t MSN
Publicado por Unknown en 10/28/2013 09:48:00 a. m. No hay comentarios: Enlaces a esta entrada

The Irish referendum: A battle of conflicting emotions 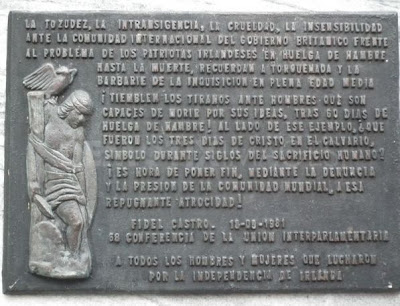 In an unofficial remembrance the Cuba regime remembered Bobby Sands who was a member of the Irish Republic Army [IRA] and die on a hunger strike like Orlando Zapata Tamayo but who was a pacific dissident killed for the regime.

Ireland: Irish vote to be dominated by economic woes

The Irish are widely expected to oust the ruling Fianna Fail party in elections on Friday, with economic problems and a deeply unpopular bailout the main issues on voters' minds.

Anger over Ireland's shattered economy is expected to see a backlash at the ballot box. Voters are expected to vent their anger at the Fianna Fail party, long dominant in Ireland. It is blamed by many for turning the economy from one of Europe's most impressive to one of the poorest.