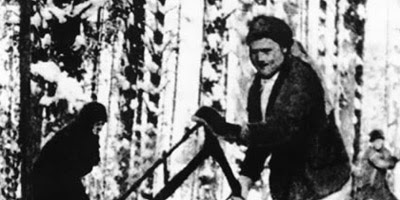 Perm, Russia
'Doesn't anybody smile in Russia anymore?" Rep. John McDowell of the House Committee on Un-American Activities asked the novelist Ayn Rand. "You paint a very dismal picture." It was 1947 and Rand, a Russian émigré, was giving testimony before the committee regarding life in Stalin's U.S.S.R.

"Look," Rand retorted, "it is very hard to explain. It is almost impossible to convey to a free people what it is like to live in a totalitarian dictatorship. I can tell you a lot of details. I can never completely convince you, because you are free."
Had McDowell been able to see Perm-36, the last remaining Gulag forced-labor camp, which is now a tourist attraction and memorial, he'd have needed no further explanation. As I toured the facility myself recently, I wondered the same thing I've wondered while beholding the Killing Fields of Cambodia, the former KGB prison in Lithuania, and the wrecked streets of East Timor: How did this ever seem like the right thing?
In fact, there once were 8,000 Soviet labor camps spattered like islands across the Russian landscape—the "Gulag archipelago" of which Alexander Solzhenitsyn famously wrote. Each camp housed about 250 prisoners, most serving 10- to 25-year sentences for contrived offenses like "uncooperativeness" or "sabotage." By the time the U.S.S.R. fell, some 30 million individuals had experienced the Gulag personally—camps like this one, located 60 miles outside a large Russian city in the Ural region called Perm.
When it was active, the camp known as Perm-36 was a site of banal cruelty and wearying misery. Unlike prisoners then, today's visitors have the run of the place: the workshops, the solitary-confinement cells, the mess hall's tiny kitchen, the cinema where prisoners, in later years when conditions were less harsh, got to watch films like "Lenin in October" over and over again. "This is the only Gulag museum, and will always be the only one," says its director, Viktor Shmyrov. "There are no other camps left. They've all been destroyed."
Merely being the last of its kind makes the Perm-36 Gulag significant. What makes it utterly fascinating, however, and unique in the panoply of relics of man's inhumanity to man, is how it's been transformed into an unexpectedly un-somber cultural venue.
Exhibit A: For five summers running, the former Gulag's grounds have attracted crowds of up to 10,000 people to the annual Pilorama Festival, a mixed-media affair that highlights Russian and foreign singer-songwriters. "Next year," Mr. Shmyrov says, "we're hoping to get Bob Dylan."
Exhibit B: In July, British theater director Michael Hunt, aided by an epic cast of 600 and "inspired by the universal idea of love and freedom of Beethoven's great opera," staged a site- specific production of "Fidelio"—whose plot centers on a woman rescuing her husband from a political prison—in and around the buildings of Perm-36. It was, apparently, a huge success.
But I wondered: Is it OK to have fun at a former Gulag camp? My tour guide thought so. As she drew our attention to dank bunk rooms, electrified fences and crow's-nest guard towers—all constructed by the labor camp's own inmates—she remarked: "Our aim is not to make people feel guilty. It's to draw a line [under the past] and show how far we've come—and make it harder for anything like this ever to happen again."
Seeking a professional opinion about Perm-36's motives and means, I phoned a specialist on historical representation, Paul Williams at Ralph Appelbaum Associates, a design firm based in New York. "Typically with memorials," he told me, "there's this kind of 'hallowed ground' approach where [visitors] don't actually become viscerally involved in the space. They stand behind a rope, so to speak." But by attending a concert, he said, people can commune and feel pride in a shared victory over dark forces; in effect, they "reclaim" both the space and the history that surrounds it. Ultimately, he believes, "There is symbolic worth in being somewhere that was once the last place you'd want to be."
Perm-36's curators and champions emphasize that the Gulag system was not some kind of aberration, some unfortunate quirk, of an otherwise healthy society. Anne Applebaum won a Pulitzer Prize for 2003's "Gulag: A History," in which she writes: "In Stalin's Soviet Union, the difference between life inside and life outside the barbed wire was not fundamental, but rather a question of degree. Both in the camps and outside them, it was possible to find . . . the same sullen disregard for human life."
This lesson is an especially hard one for Russians themselves, many of whom are still quick to idolize Stalin and discount his crimes. Such proclivities prompt Lyudmila Alexeyeva of the rights group Memorial, which co-owns the Gulag camp along with the local Perm government, to say: "For others, let [Perm-36] be an education. And for us [Russians], let it be a reminder."
Toward this end, Mr. Williams thinks the physicality and approachability of Perm-36 are invaluable. "Because the setting gives an emotional charge, [visitors] don't have to do too much intellectual work to understand that these events and struggles actually happened." He cites the National Civil Rights Museum in Memphis, Tenn., which is housed in the Lorraine Motel where Martin Luther King Jr. was assassinated, as another profound example of an exhibition incorporated into a historical location.
But as a "usable place of remembrance," he says Perm-36 is highly unusual. "There's no other [memorial site] I can think of that has that sense of celebration."