imf
Three years after the global financial crisis, some of the biggest names in economics came together with the International Monetary Fund to discuss what we have learned―and what we need to do differently. Hear what Professor Solow, winner of the Nobel Prize in Economics, has to say.
Publicado por Unknown en 10/29/2012 12:09:00 p. m. No hay comentarios: Enlaces a esta entrada

IMF chief hails Canada as economic model for the world 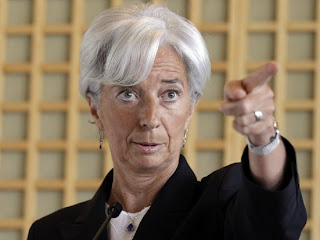 TORONTO — The head of the International Monetary Fund says measures taken to protect Canada’s economy should be a model for countries trying to fix their financial systems.
Christine Lagarde said Thursday that Canada has been a leader in creating policies intended to rein in the build-up of household debt.
“Abroad, Canada is identified by its values of co-ordination and consensus building, which have given your country influence beyond its years,” she said.
“Building a safe and stable financial system is in the best interests of the global community, but it also serves the self-interest of nations,” she added.
Lagarde made the comments at a dinner held in Toronto by the Canada International Council — an organization created to promote Canada’s position on the world market.
She pointed to the decision by Finance Minister Jim Flaherty to boost down payments on new mortgages for homebuyers as an example of restraint that others should follow.
“All of these new reforms comprise the tools so far that will help us shape the future financial system,” she said.
“We must shape the system so it cannot again hold us ransom to the consequences of its failings.”
Lagarde’s speech focused on global financial reforms that while “heading in the right direction,” still haven’t delivered the safer financial system they were designed to create.
“Some financial systems are still under distress and crisis-fighting efforts are inadvertently impeding reforms,” Legarde said.
She singled out Basel III requirements as one of the financial reforms that had “generous implementation timetables,” that have been in development since 2010.
Under the proposed Basel III rules, a bank’s required capital levels must meet certain requirements, amongst other standards. The intention of the rules is to set a standard on key measures of a bank’s health and its ability to endure future economic downturns.
“There are many vested interests working against change and pushback is intensifying,” Legarde said.
“It is interesting how some banks say the new regulations will be too burdensome, but then spend hundreds of millions of dollars lobbying to kill them.”
Canadian banks have been proactive in reinforcing their balance sheets to meet the Basel III requirements ahead of schedule, and are widely considered a model for international banks because they weathered the global recession better than others.
“Most countries have committed to adopt some or all of the new regulations, and some have moved further ahead with their own national policies,” Lagarde said.
“The challenge now is to proceed to the end of the reform path all together.” More >>
Publicado por Unknown en 10/27/2012 12:23:00 p. m. No hay comentarios: Enlaces a esta entrada

Why Cuba Is Not Part of the IMF, WB & IDB

Richard Feinberg. Photo: irps.ucsd.edu
By Dawn Gable/ HAVANA TIMES, Nov 21 —
“Cuba has no principled position against relations with the IMF or World Bank,” a senior Cuban diplomat told Dr. Richard Feinberg, former special assistant to President Clinton and senior director of the National Security council’s office on inter American affairs, adding that Cuba does not necessarily need to agree with all of the activities of an international organization in order to be a member of it, the UN and the WTO being two examples. More >
Publicado por Unknown en 11/21/2011 11:17:00 a. m. No hay comentarios: Enlaces a esta entrada