The New Yorker
By Michael Specter


The severe inequality of the Angolan oil boom.

catoinstitutevideo
In what the Obama administration describes as a “years-long” coalition effort to “degrade and destroy” ISIS, the United States has reentered conflict in the Middle East. The White House heralds its close cooperation with Arab allies, including a number of petrostates such as Saudi Arabia and Qatar, describing their cooperation as vital to the success of the campaign.

But petrostates are unlikely to be good allies for the U.S. campaign in Iraq and Syria. The reliance of those countries on oil and gas revenues distorts both foreign policy decisions and their implementation. First, petrostates have weak foreign policy institutions, producing policy that is of poor quality and strongly driven by personalities. Second, the vast flow of oil income enables the states to back nonstate actors in conflicts, but their weak civil service cannot control the flow of arms or funds. Third, oil income also enriches private citizens, some of whom directly fund terrorist organizations such as ISIS. Thus, largely through ineptitude, those states have helped to foster Syria’s civil war, indirectly facilitating the rise of ISIS.

The idiosyncrasies of oil-rich states make them poor partners for the United States in this instance and in future conflicts. As allies, petrostates are especially likely to draw America into unnecessary and intractable conflicts.

In particular, Washington should largely disentangle itself from the Saudi alliance and from reliance on Saudi intelligence and diplomatic services. Keeping Saudi Arabia at arm’s length will help to minimize involvement in Middle East conflicts that are not vital to U.S. interests.
Publicado por Unknown en 3/31/2015 07:42:00 p. m. No hay comentarios: Enlaces a esta entrada

(Reuters) - A leak on a major Russian oil pipeline caused a spill in the Black Sea near the port of Tuapse on Wednesday where officials said stormy weather was hampering efforts to assess and respond to the mishap.
"Some quantity of oil has spilled into the sea," Sergei Proskurin, first deputy captain of the port of Tuapse, told Reuters.
He said the size of the spill was unclear and that emergencies services were working to deploy temporary floating barriers to contain the spill but were being delayed by the stormy conditions.
Tuapse is a busy industrial and oil port but is located close to many Russian Black Sea resorts. It is just 118 km (73 miles) from the town of Sochi which hosted the 2014 Winter Olympics.
Two Tuapse residents told Reuters they had seen oil in the sea and in a river along which the pipeline runs toward the Tuapse oil refinery operated by state oil firm Rosneft.
"I can see dark spots on the river... The sea is stormy. I can't say it is fully covered in oil but there is plenty of oil in the port and on berths, not to mention the coast line," said a worker at the refinery who asked not to be named.
Russia's emergencies ministry confirmed the leak but declined to comment on the size of the spill. Russian pipeline monopoly Transneft was quoted by local media as saying the pipeline was shut after the leak.
Rosneft said work at the refinery was unaffected as it was drawing crude from its stocks.

How Low Can Oil Go?

The New Yorker
By James Surowiecki 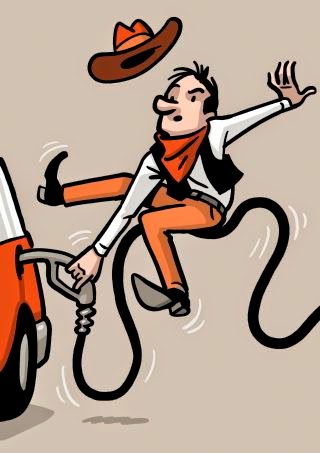 Just in time for Christmas, there’s a surprise present for consumers: plummeting oil prices. They have fallen forty per cent since July—gasoline now costs well below three dollars a gallon—saving Americans hundreds of millions of dollars a day. This has been a mini-stimulus for the economy, and one that was almost completely unexpected. Before the summer, prices had been high for years. Despite a lot of geopolitical turmoil and macroeconomic anxiety, the oil market had been remarkably stable, and it seemed possible that, as one study put it, “hundred-dollar oil is here to stay.” But in a matter of months all that changed.
So what happened? At the most basic level, it’s a simple supply-and-demand story. Europe’s continued troubles and a slowdown in the Chinese economy muted the demand for oil. Meanwhile, the U.S. shale-oil boom and a rebound of drilling in Libya boosted supply. “Libya’s ramping up of production caught people genuinely off guard,” Steven Kopits, the managing director of Princeton Energy Advisors, told me. “That’s the kind of thing that’s hard to predict unless you have really good intelligence assets on the ground.” The result was that the market was producing many more barrels of oil a day than were consumed. As oil was dumped on the market, prices inevitably fell.
In the oil market, though, nothing is simple. The real story of the past few months isn’t that oil prices have fallen; it’s that they’ve fallen so far so fast, and that they may still have a long way to go before hitting bottom. That suggests that the stability of the past few years has yielded to a new era of volatility, in which small changes in supply and demand will lead to big price swings.
Such volatility is exactly what the history of oil prices would lead us to expect. Commodities are more volatile than other assets—the price of copper fluctuates a lot more than that of a television set—and oil has historically been more volatile than most other commodities; a 2007 study found that in the U.S. it was more volatile than ninety-five per cent of other products. The biggest reason for this volatility is that short-term supply and demand for oil are what economists call “price-inelastic,” which means that they don’t respond much when the price of oil changes. People don’t immediately start driving less when gasoline prices spike—they just pay more for gasoline. On the supply side, drilling projects take a long time to start up or to shut down, so higher prices don’t immediately translate into more supply, or lower prices into less. This means that the way prices typically return to normal—through increasing supply or diminishing demand—doesn’t really happen in the oil market. So a two- or three-per-cent change in supply, which is about how much the shale boom and the Libyan rebound added to global daily production, can spark a huge move in price.
In recent years, hedge funds and commodity-index funds have put hundreds of billions into the oil market, and studies suggest that this flood of investment may have increased the market’s volatility. By its nature, oil trading is beset by uncertainty. It’s not just the precarious geopolitics of where most of the world’s oil reserves are. There’s also the fact that predicting future demand requires forecasting the performance of the entire world economy.
You might think that the existence of OPEC would guarantee stability. But OPEC is weaker than it once was, thanks to the emergence of big non-OPEC oil producers, like the U.S. Besides, enforcing stability at a time of falling prices is easier said than done. OPEC’s members face a classic collective-action problem. They’d be better off ultimately if they all agreed to curb production—Saudi Arabia, in particular, would have to cut back—but individually they have a greater incentive to continue pumping. And the Saudis know from history that cutbacks don’t always work. In the early nineteen-eighties, they slashed output in an attempt to prop up energy prices. “They cut production and cut production and cut production, and all it did, more or less, was wreck their economy for the next twenty years,” Kopits said. “This time around, they’re drawing a line in the sand and saying We’re going to keep pumping, and everyone else is going to have to adjust around us.”
The shale-oil boom has added to uncertainty, too. OPEC has no control over what U.S. producers do. And even though shale-oil producers often face higher production costs than traditional drillers do (which should make them quick to cut production when prices fall), many also have debt payments to make and fixed costs to meet if they don’t want to go out of business. So they’re likely to keep pumping, since that keeps revenue coming in until (they hope) the price recovers. But continuing to pump, of course, makes it harder for prices to stabilize.
It would be a mistake for oil producers to expect a return to the high, stable prices of recent years. By the same token, American consumers shouldn’t get too used to cheap gas, since in the long run low oil prices erode the conditions that brought them about. Producers are already starting to adjust: ConocoPhillips just announced that it’s cutting its drilling budget. And, because cheap oil gives everyone an economic boost, eventually it leads to higher demand. We’re awash in oil right now. Soon enough, we may be wondering where it all went.
Publicado por Unknown en 12/15/2014 02:49:00 p. m. No hay comentarios: Enlaces a esta entrada

Oil to fuel the engine of ISIS terror

ISIS NOW CONTROLS seven oil fields and two small refineries in northern Iraq, bringing in as much as $2 million per day, as experts warn that the oil flow will continue translating into terror funds for militants if unchecked.
Keep reading on  foxnews >>
Publicado por Unknown en 8/21/2014 05:45:00 p. m. No hay comentarios: Enlaces a esta entrada 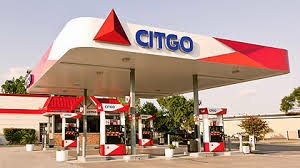