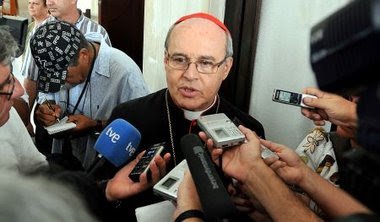 HAVANA — Cuba's Roman Catholic cardinal called for the liberation of some of the island's 200 political prisoners on Thursday after a rare sit-down with President Raul Castro, and said he thought his encounter with the Cuban leader was a "magnificent start" to serious dialogue.

"The church is interested in an alleviation of the situation (of the political prisoners) — the liberation of some of them, for example," Cardinal Jaime Ortega said, a day after he and another church leader, Archbishop Dionisio Garcia, held a four-hour discussion with Raul Castro at the Palace of the Revolution, the seat of Cuba's government.

The church has called previously for freedom for the island's prisoners of conscience, but doing so right after such a high profile meeting was unusual.

Ortega said in a news conference that he had also brought up the government's decision to bar the dissident Ladies in White from holding weekly marches. The group — comprised of the wives and mothers of jailed political prisoners — were stopped from protesting for three straight weekends in April and pro-government counter-protesters were brought in to shout abuse at them.

The standoff ended after Ortega's mediation, when the government agreed to allow the quiet protests to resume in return for assurances the women would not expand their activities.

The cardinal made clear that no deal on any prisoner releases or easing of measures against the opposition had been struck.

The meeting was a sign of the church's growing influence on the island.

Garcia, who is archbishop of Santiago and leader of the Conference of Bishops of Cuba, said it was the first time the head of the bishops' group has met with the country's leader in five years, when Fidel Castro was still in charge. Fidel stepped down formally in 2008, turning power over to his brother.

"It was a very positive meeting," he told The Associated Press.

Garcia said that he thought "that there was good will" on the part of the government on the issue of dissidents.

A photo of a beaming Raul Castro with the two church leaders was printed on the front page of Thursday's Communist-party daily Granma, but the caption said little about what was discussed and made no mention of dissidents or political prisoners.

The government denies it holds political prisoners, and says dissidents are paid mercenaries of Washington, which has been at odds with Cuba since shortly after Fidel Castro overthrew dictator Fulgencia Batista in 1959.

Ortega has waded into politics several times in recent months, telling a church magazine in April that Cuba was in its worst crisis in years and that its citizens were clamoring for political and social change sooner rather than later.

The meeting between Castro and the church leaders comes a month before Vatican Foreign Minister Dominique Mamberti is scheduled to visit Cuba for talks on the island's economic challenges and the effects of emigration and the families torn apart by it.

Relations between the church and Cuba's government have often been strained. Tensions eased in the early 1990s when the government removed references to atheism in the constitution and allowed believers of all faiths to join the Communist Party. They warmed more when Pope John Paul II visited Cuba in 1998.