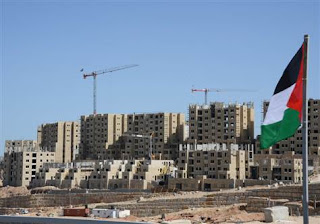 RAWABI, West Bank — As gambles go, it hardly gets bigger: A $1 billion dollar bet on peace — or at least a measure of calm — in the West Bank.
Even the founder of Rawabi, the biggest construction project in the history of the Palestinian people, says nobody in his right mind would invest here.
Standing on a wind-swept hilltop overlooking the biblical hills of Judea, a half-hour drive from Ramallah, Bashar Al-Masri points to the Palestinian flags flying atop the giant cranes that are building, with phenomenal speed, the first modern Palestinian town.
“As a teenager, raising the Palestinian flag was enough to be shot and killed,” he says, immaculate in a form-hugging, thin-lapelled dark suit and narrow burgundy tie.
“This is a small, symbolic way of how long we came along, and how much we will come along in the future,” adds Al-Masri, who as a teenager threw stones at Israeli soldiers.
The largest flag is mounted on a pole facing the Jewish settlement of Atteret, a community of about a hundred families located across a small valley.
The flag is a deliberate statement.
“So that we can show our unfriendly neighbors who were violently against us that we're here, and we're here to stay, and we're not afraid of you, we will remain here,” Al-Masri says.
Nation-building
Two-thirds of the investment in this town comes from the government of Qatar’s investment fund, Al-Masri explains. The design, planning and construction are all by Palestinians, with outside help, and what appears to make him proudest of all, he says, there is no input from Israel.
He says there are more than 8,000 families interested in moving in, and the first few hundred apartments will go on the market in March, with the town’s inauguration in May. The cost of the apartments, depending on size and location, is between $75,000 and $140,000.
“This is about nation-building, this is about doing what’s right, this is my contribution that I know the best,” says Al-Masri. “The human rights activists have their contribution, the [Palestinian Authority] people are building capacity and building the government, we're all together as the Palestinian people building a state.”
There are two main practical problems for the new town. All the water has to be piped in, and there is no obvious source. “We are in this project, putting facts on the ground, and things will have to follow,” is Al-Masri’s answer, hoping for a miracle.
More on worldnews >>
Publicado por Unknown en 3/03/2013 07:29:00 p. m. No hay comentarios:

Europe’s new tallest building: An ’iceberg’ in heart of London or titanic $2.35B folly? 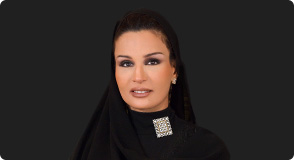 LAHORE - Qatar is playing a mediatory role for talks between the Taliban and the United States, Weekly Nida-i-Millat has reported quoting reliable sources.
According to the weekly, the Gulf country is also playing an important role for conciliation between the Taliban and the Karzai government. Head of the political wing of the Taliban, Tayyab Agha, has been meting with the Qatar authorities, which have been reported by international press. According to Arab sources, Tayyab Agha is now holding talks in Germany to advance the process he had started in Qatar. His efforts would culminate into the Second Bonn Conference, to be held in December.
The first Bonn Conference was held before the US invasion of Afghanistan in 2001. At the time, the US was trying to replace the Taliban government with the one of the Northern Alliance. The purpose of the latest talks is to find an honourable exit for the US from Afghanistan.
It is said a secret meeting was held last week between a member of the royal family of Qatar and a representative of the Karzai government.
Afghanistan ambassador to Pakistan Omar Daudzai represented the Kabul authorities.
Publicado por Unknown en 7/11/2011 11:38:00 p. m. No hay comentarios: