they are not a bunch of santa claus but a lump of idiots and irresponsibles.
-------------------------
Toronto Sun/ Michele Mandel
TORONTO - The Supreme Court of Canada no longer sees anything criminal in playing Russian roulette with people’s lives.
In a unanimous decision, the highest court in the land has now ruled that because of advances in medical treatment, with HIV no longer the death sentence it once was, it’s no longer a crime for a person to hide their HIV status from their sexual partner — as long as they wear a condom and have a “low viral load.”
No longer is there a blanket duty to inform in those cases. Instead, it’s now their secret to keep. Don’t count on the law, it’s buyer beware — insist on protected sex or live with the consequences.
But how can the infected person’s right to privacy trump that of their partner’s right to know and calculate for themselves whether there is — or is not — any risk to their health?
The Supreme Court was asked to wade in on two cases — one in Winnipeg where the man, since deported, was convicted for failing to disclose his HIV-positive status to nine sexual partners, including a 12-year-old girl; and the other concerning a Montreal woman who was charged with not informing her former spouse that she had HIV.
Because of anti-retroviral drugs, both had low or undetectable levels of HIV. None of their partners contracted the disease.
The high court upheld her acquittal and restored his convictions for aggravated sexual assault for the counts where he had sex without protection.
In updating its original 1998 ruling, the top court said those with HIV don’t have to legally disclose their status unless there’s “a realistic possibility” of transmission. But who defines “realistic?” How low is a low viral load?
The ruling could have been worse. The AIDS/HIV Legal Network had wanted the court to decree that no one with HIV can be prosecuted for non-disclosure — even those who may be highly infectious — as long as they were using condoms. Shocked and dismayed, AIDS activists have called the Supreme Court decision “a huge setback” and further evidence of “AIDS-phobia.”
Nonsense. This isn’t about discrimination; this should be about informed consent.
In an ideal world, there would be no need to criminalize a health issue — one could trust people’s sense of morality to do the right thing. But not surprisingly, some people aren’t keen on telling the person they want to take to bed that they carry a potentially fatal disease.
We have seen more than 130 examples since 1998 of men and women charged with aggravated sexual assault for knowingly hiding their HIV status: The worst among them was former Ontario civil servant Johnson Aziga who was declared a dangerous offender and convicted of first-degree murder after two of his partners died.
Granted, selfish and reckless people like Aziga would still be prosecuted under the newly clarified law.
It’s those on the lower end of the risk spectrum who no longer have any legal obligation to be honest and forthcoming. As long as it’s protected sex, they can sleep with whomever they want without any pillow talk that includes their HIV status. The deception may certainly be immoral, but it’s no longer criminal because the risk of transmission has now been deemed unrealistic. More >>
Publicado por Unknown en 10/06/2012 01:01:00 p. m. No hay comentarios: Enlaces a esta entrada

thestar.com/ By Megan Ogilvie Health Reporter
After two decades of research, a group of Canadian scientists has won approval to start testing an experimental HIV vaccine on humans.
The vaccine, developed by researchers at the University of Western Ontario, has received a green light from the U.S. Food and Drug Administration for clinical human trials.
Beginning in January, the vaccine will be given to 40 healthy people with HIV to test its safety.
Dr. Chil-Yong Kang, professor of virology at the Schulich School of Medicine and Dentistry at the University of Western Ontario, called the FDA approval a “milestone.”
“We started the basic science research two decades ago,” Kang said. “The vaccine development, we started 10 years ago. This is incredible for us to get to this stage of development.”
Kang said the vaccine, called SAV001, is the first preventative HIV vaccine approved for clinical trials to use a killed whole HIV-1 virus to activate the immune response in humans.
The strategy has been used before to develop successful vaccines for influenza, polio, rabies and hepatitis A. Kang said these past successes for other viral diseases provide hope the Canadian-developed vaccine will work against HIV.
The human immunodeficiency virus used in the vaccine has been genetically altered to render it non-pathogenic, or unable to cause disease. Kang and his research team then further inactivated the virus using chemicals and radiation.
“In the past, people did not use this strategy (using a killed whole HIV virus) because people did not know how to make a safer virus and people did not know how to make large quantities of it,” Kang said. “Now we have solved those problems by the genetic engineering of the virus.”
According to the International AIDS Vaccine Initiative, there are 30 HIV vaccines currently being tested in phase 1 clinical trials around the world.
Many of these vaccines have largely focused on using one specific component of the human immunodeficiency virus to trigger an immune response. Other vaccines have used other viral vectors to create a vaccine. Right now, there is no effective HIV vaccine.
Dr. Jonathan Angel, president of the Canadian Association for HIV Research, whose research is funded by the Canadian Institutes of Health Research, said it is exciting that a Canadian scientist’s work has progressed from the basic research level to a vaccine approved for human clinical trials, meeting the rigorous criteria of the FDA.
But he also cautioned that developing an effective HIV vaccine remains a daunting task because HIV is a complex virus that scientists do not yet completely understand.
Should the SAV001 be proven safe, the vaccine will enter the second phase of clinical trials, in which it will be tested on 600 HIV-negative volunteers at high risk for HIV infection. Researchers will measure the volunteers’ immune response to the vaccine.
The third and final phase would enroll 6,000 HIV-negative volunteers at high risk for the disease. The participants, half of whom would be vaccinated and half un-vaccinated, would be tracked for three years to see how many in each group became infected with HIV.
Kang and his team received funding from Sumagen Canada, a company created in 2008 to support the development of the vaccine and a subsidiary of a Korean-based pharmaceutical venture company.
Publicado por Unknown en 12/21/2011 02:00:00 p. m. No hay comentarios: Enlaces a esta entrada 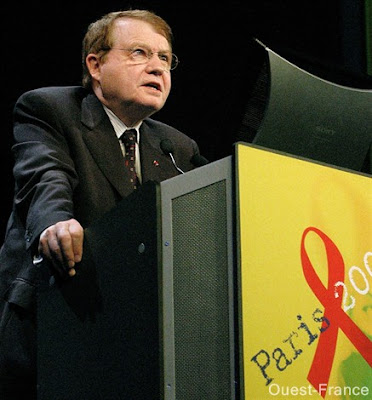