How competitive is America? A Hangout with The Economist

Cost of Labor No Longer A Big Factor in Manufacturing

William Bates, Chief of Staff for the Council of Competitiveness ,explains that labor is no longer the primary determinant as far as cost for big companies like Apple, which could mean bringing more manufacturing jobs to the U.S.

The Globe and Mail/ GRANT BISHOP 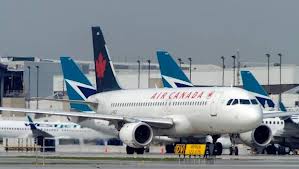 At this time of the year, almost everyone has a travel story. Mine involved nearly missing a connecting flight to Victoria after being forced to check carry-on luggage that was standard size and well-under the weight limit. Seeking help from an airline employee, I was curtly refused and accused of having an overweight bag.
Canada’s airlines, it seems, are the inevitable punching bag for most tales of holiday woe.
Why do airlines get away with poor customer service? There are two problems. Both are issues of competition.
The first problem is the lack of foreign entry into domestic carriage. The current rules on foreign ownership deprive Canadians of choice. For example, Australia has allowed a right of establishment for foreign carriers, resulting in lower fares and expanded routes. My friends actually enjoy their air travel experiences in Europe where airlines compete for their business. In Canada, we remain beholden to Canadian-owned carriers if we want to fly between two Canadian cities. The result is an oligopoly that gouges travellers and takes their business for granted.
Ambarish Chandra of the University of Toronto found that, relative to Americans, we often pay between 50 and 100 per cent more for comparable travel between Canadian cities. Statistics Canada research shows that productivity growth in Canada’s airline sector is abysmal, markedly outpaced by U.S. airlines. Various expert reviews of the airline industry – including by the Competition Bureau and the 2002 independent observer on airline restructuring – have recommended allowing a right of establishment for foreign carriers on domestic routes to put pressure on our laggard airlines to improve.
The airlines argue that foreign carriers would only operate on lucrative routes. However, Canadian carriers are under no obligation to fly to money-losing destinations and there is scant proof that the airlines presently cross-subsidize to operate otherwise unprofitable routes. Look at prices to fly to Sydney, Nova Scotia or Medicine Hat, Alberta. It certainly seems like airlines are recovering their costs on these routes.
The 2008 Competition Policy Review Panel recognized that a moribund air travel sector is a drain on the national economy. People depend on air travel to conduct business face-to-face. The panel recommended significant liberalization of air travel. We are still waiting.
The second problem is the bargaining power of unions in this oligopoly context.
The freedom of association guaranteed in Canada’s Charter of Rights and Freedoms means that employees have a right to bargain collectively . Unions play a key role in protecting workers against exploitation.
However, Canadian labour law has not paid much attention to the ability of unions in protected sectors to squeeze consumers. In most industries, if unions demand too much from employers, some other competitor in that industry will trounce them. Market competition disciplines what unions can demand.
Not so for Canada’s airlines. These unions can demand much more. Not fearing a more efficient competitor who would undercut its prices, the airline can simply charge higher fares. If unions don’t get what they want, they can grind travel to a halt and hold customers ransom.
At any workplace that I have worked, an employee who treated a client as dismissively as I was would have been given notice the next day. But, under coverage of collective agreements, the process to get rid of such an employee can be lengthy and onerous. This is unfortunate. Officious employees give the rest of their bargaining unit a bad name, feeding our stereotypes about airline staff. I will have less sympathy when a striking airline union is ordered back to work.
We need more competition to discipline our airlines and their unions. Canadians should reflect on their experiences on our airlines whenever we hear our politicians argue that we need to protect our “national champions”. The shakedown that Canadian travellers face today is too high a price for maple leaves on tailfins.
Publicado por Unknown en 12/25/2012 11:42:00 a. m. No hay comentarios: Enlaces a esta entrada

By Julian Eagle Platón and Will Inboden
Does the United States benefit from having a strategic competitor? We share the common assessment that the U.S.-China relationship will be the most important geopolitical relationship this century. The complex competition between these two powers will play out not just in Asia but across the globe. Much commentary rightly focuses on the many ways a rising China may threaten U.S. interests.
But is this competition from China merely a threat, or also potentially an opportunity for the U.S.? We think it can be the latter.
Competition is good. We welcome competition in the marketplace. As one of the fundamentals of market capitalism, we have anti-trust laws to break up monopolies and allow competition to flourish. Competitive markets are more innovative and efficient than monopolistic markets, as competitors constantly strive for improvement and advantage.
These benefits translate to the political sphere. David Landes' The Wealth and Poverty of Nations accurately identifies competition as a critical factor in Europe's ascent to world leader for half of the last millennium. "Enterprise was free in Europe. Innovation worked and paid, and rulers and vested interests were limited in their ability to prevent or discourage innovation.  Success bred imitation and emulation..." Even inventions created elsewhere in the world (e.g. gunpowder) reached their maximum potential via European rivalries.
Lack of competition can breed complacency and inefficiency, hence the constant soul-searching of U.S. foreign policy wonks following the Cold War and the demise of the Soviet Union as our chief rival. A competitor focuses and invigorates thinking, while providing a benchmark to measure progress. Chinese competition can spur America to address its weaknesses, driving the U.S. to reach new heights.
Here we are optimistic. America's capacity to compete remains strong; indeed the fundamentals of American power are undiminished. The U.S. enjoys a position of almost unparalleled geographic privilege. Natural resources are abundant, particularly arable land, new petroleum and natural gas reserves, and renewable resource capacity.  America benefits from secure borders and negligible territorial disputes. And access to two oceans facilitates continued maritime supremacy. China faces a critical shortage of arable land, numerous territorial disputes, uneasy and resentful neighbors, and comparatively limited access to the sea.
The U.S. also possesses a demographic advantage, which can continue if the U.S. maintains and reforms our open immigration system, and arrests our recent decline in fertility rates. Future immigrants will add to the population, spur greater entrepreneurship, widen the tax base, and help soften the burden of the baby boomer retirement. China faces the triple demographic peril of a shrinking and aging population with a growing gender imbalance.
Even economically, American competitiveness remains strong. The recent recession and ongoing budget travails notwithstanding, the U.S. continues to be the dominant creative force in the world. U.S. firms are strongly competitive in world markets. The U.S. also retains a significant advantage in soft power, evidenced by the greater willingness of regional powers to work with the U.S. over China.
Historically, America has a record of responding well to competition, even amidst adversity. During the 1970s, American stagnation and decline was exemplified by an ignominious retreat from Vietnam, Watergate, the oil embargo, stagflation, the Iranian hostage crisis, and an apparently ascendant Soviet Union. Similarly, Japanese economic competition in the 1980s, during another downturn in the American economy, had many prognosticators warning of looming Japanese supremacy. Japan's economy was surging and Japanese investors - steered by the powerful Ministry of International Trade and Industry - purchased scores of American assets. Ezra Vogel's 1980 book Japan As Number One crystalized this thinking.
In both cases, the magnitude of the competition was not nearly as threatening as the predictions. And in both cases the U.S. responded positively to the challenge. The Reagan economic expansion and military build-up in the 1980s helped end the Cold War, and the increased productivity and economic growth of the 1990s enabled the U.S. to meet Japan's economic challenge.
Does Chinese competition rise to the level of the Cold War contest of the superpowers? Certainly not yet, and hopefully never. Skeptics highlight China's relative weakness in comparison to the U.S., particularly in military power. Moreover, Chinese territorial ambitions in the East and South China Seas do not yet equate to Soviet domination behind the Iron Curtain and designs beyond.
China also fails to present a competing worldview in the manner of Soviet communism. Authoritarian capitalism has many hindrances and has not demonstrated an enduring appeal, as bribing populations to support authoritarian leaders can only stave off demands for self-determination in boom times. When the economy begins to lose steam, the cracks in such a scheme can be fatal. Deep flaws are already apparent in China's vaunted economic growth, in the form of environmental degradation, a speculative real estate bubble, and soaring local debt.
Continued sober and accurate analyses of rival capabilities are essential to avoid exaggerated threats and wasted resources. Imagined threats are rightfully discarded, but it is imperative to respond to actual competition. Another risk comes from tunnel vision focused exclusively on the chief rival. This necessitates an awareness of potential competition from unlikely sources, and the flexibility to respond appropriately.
It is evident, however, that the Chinese leadership views the U.S. as a threat, and that China's remarkable growth positions it as the chief competitor to the U.S. So, how can we make the most of this going forward, to ensure that competition remains free of conflict? After all, competition may have driven European supremacy in the last millennium, but it also caused incessant warfare that ultimately eroded Europe's global dominance. More >>
Publicado por Unknown en 12/03/2012 04:11:00 p. m. No hay comentarios: Enlaces a esta entrada 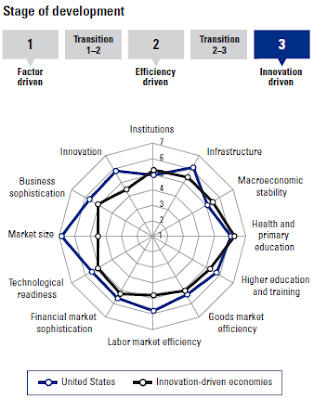