It's not every day you see a mouse with a mohawk. But that's what researchers saw while studying mice that had a genetic mutation linked to autism.
The mohawks that the mice were sporting actually resulted from their "over-grooming" behavior, repeatedly licking each other's hair in the same direction.
The behavior resembles the repetitive motions displayed by some people with autism, and the researchers say their experiments reveal a link between the genetic causes of autism and their effects on the brain, suggesting potential avenues for treating the disorder.
"Our study tells us that to design better tools for treating a disease like autism, you have to get to the underlying genetic roots of its dysfunctional behaviors, whether it is over-grooming in mice or repetitive motor behaviors in humans," study researcher Gordon Fishell, a neuroscientist at NYU Langone Medical Center, said in a statement.
Autism is a spectrum of developmental disorders that involve social impairments and communication deficits. People with autism may also engage in repetitive behaviors, such as rocking or hand flapping. [ Beyond Vaccines: 5 Things That Might Really Cause Autism ]
In the study, detailed today (May 25) in the journal Nature, the researchers bred mice that lacked a gene for a protein called Cntnap4, which is found in brain cells called interneurons.
Having low levels of this protein leads to the abnormal release of two brain-signaling molecules, known as dopamine and GABA. Dopamine is involved in sensations of pleasure; GABA (which stands for gamma-aminobutyric acid) dampens neural activity and regulates muscle tone.
Mice that lacked the gene for this critical brain protein were found to obsessively groom their fellow animals' fur into mohawk-like styles, suggesting a link between genetics, brain function and autistic behaviors.
"There have been many candidate genes implicated in contributing to autism, but animal and human studies to identify their action have so far not led to any therapies," Fishell said in the statement. "Our research suggests that reversing the disease's effects in signaling pathways like GABA and dopamine are potential treatment options," he said.
— Tanya Lewis, LiveScience
Publicado por Unknown en 5/26/2014 04:31:00 p. m. No hay comentarios: Enlaces a esta entrada

The waitress, the autistic girl and the broken hamburger 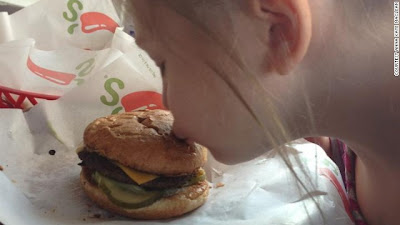 Joshua Lott  /  Reuters
Nine-year-old Jack Balter plays tug-of-war with his sister Brianna at their home in Scottsdale, Arizona, on May 17.

CHICAGO — Lynn and Neil Balter always dreaded stage productions at their son Jack's elementary school.
When Jack was up there with the other performers, the noise, the lights, the crowd almost always got to him, and he would "start spinning," wandering around the stage or turning in circles, Lynn says. "It usually turned into an embarrassing situation," she adds.
But at a dance performance at Jack's Scottsdale, Arizona, school last December, something was different. "He was half a beat behind in the dance, but he did the whole thing," Neil says. "He participated and took the bow with his class."
Afterward, Jack's teacher greeted the Balters in tears. "I don't know what is going on with this kid, but there is this miracle happening and I have a different kid at school," she told the Balters.
Jack, 9 years old, has autism. What his teacher didn't know is that Jack was taking part in a clinical trial for a drug aimed at overcoming some of the social impairment associated with autism, a spectrum of disorders that range from the social awkwardness and narrow interests seen in Asperger syndrome to severe communication and intellectual disabilities.
For years the best that doctors have been able to offer patients with autism is intensive therapy and anti-psychotic drugs such as Johnson & Johnson's Risperdal to blunt some of the extreme behaviors associated with their disorder - tantrums, aggression and self-harm. Anti-psychotics quiet the patients. But they do nothing to address the core social and communication problems that make it impossible for many autistic children to develop deep relationships with their families and peers and grow into independently functioning adults.
As Jack's experience suggests, that may be about to change. Researchers are conducting advanced trials of the first drugs expressly designed to correct the genetically induced signaling problems in the brain that result in autism. The early indications are positive enough to offer new hope for families and spark interest from drug companies.  More >>
Publicado por Unknown en 5/31/2012 01:45:00 p. m. No hay comentarios: Enlaces a esta entrada

DOSWELL, Va. — An 8-year-old autistic boy was found alive Friday, nearly six days after he wandered away from his family while walking in a wooded park.
Robert Wood Jr. was found in a fetal position in a creek bed at a quarry about 20 miles north of Richmond around 2 p.m., Hanover County Sheriff David Hines said. Wood was in good condition, but was taken to a Richmond hospital where he was reunited with his family.
The boy was found about one mile from North Anna Battlefield Park, where he disappeared while on a walk with family on Sunday.
Wood had been the focus of an intense search attracting more than 1,000 volunteers some days and assisted by professional search-and-rescue teams.

Autism in Another Ape: A baby bonobo suffers autism Teco shows more interest in objects than in his family—much as autistic children do. Image: Courtesy of Elizabeth Rubert-Pugh, Great Ape Trust
Rambunctious one-year-old Teco, a third-generation captive-born bonobo at the Great Ape Trust in Des Moines, Iowa, has an ape’s usual fondness for games and grapes. But perhaps because of trauma from a difficult birth (his mother was in labor for 60 hours) or a genetic predisposition, Teco is different from his bonobo peers in ways that resemble autism in young children. He could not cling to his mother or nurse the way healthy young apes do instinctively, mimicking the aversion to physical contact seen in children with autism. Teco also tends to fixate on shiny objects and avoids eye contact, and he has trouble coordinating his four limbs. A genetic analysis of bonobos, already under way, may shed light on Teco’s condition and offer new perspectives on autism’s genetic roots in humans.
Read more >