MLB Trade Rumors
By Jeff Todd [June 18, 2015 at 8:39pm CDT]
Cuban hurler Ronald Bolanos, a 19-year-old righty, has left the island nation and has his sights set on joining a MLB organization, Baseball America’s Ben Badler reports. Bolanos has also spent time in the outfield, but looks like a better prospect on the hill.
According to Badler, Bolanos fell just outside the top-twenty Cuban prospect list that he just compiled. He works in the 88 to 93 mph range with his fastball, and has a promising slider as well. The youngster lacks polish and has mostly worked in a relief capacity, but remains a fairly interesting arm.
As Badler explains, Bolanos is young and inexperienced enough that he’ll ultimately be subject to international signing bonus limits. He’s a ways away from the market: in addition to all the regular barriers he’ll have to clear, Bolanos will not be eligible to register until the signing period that begins on July 2, 2016.
Publicado por Unknown en 6/19/2015 11:27:00 a. m. No hay comentarios:

MLB Trade Rumors
By Jeff Todd [May 28, 2015 at 10:33am CDT]
Shortstop Alfredo Rodriguez has departed Cuba with the intent of seeking MLB free agency, Ben Badler of Baseball America reports. The 21-year-old took home Rookie of the Year honors in the top division Serie Nacional this year, though as Badler notes that was the subject of some disagreement.
As always, you’ll want to read Badler’s piece for a full breakdown, but the takeaway seems to be that Rodriguez is a whiz with the glove with good speed and a suspect bat. Badler labels the youngster as a polished shortstop whose hand and footwork are outstanding, accompanied by good range and a solid arm.
Offensively, though, it appears that Gonzalez has much development ahead of him. He did swipe 12 bags in 16 tries, so there’s a reasonable expectation that he will add value on the bases. But he slashed only .265/.301/.284 in his 304 plate appearances last year, striking out a reasonable 38 times but taking a free pass in only 11 turns at the dish.
Badler goes on to explain how Gonzalez fits within the evolving rules regarding players from Cuba. Teams will have to use their international spending allocation to sign him, though he will not be subject to the league’s registration policy — which can cause a delay, as Badler explained recently — due to his relatively advanced age for an international prospect. All said, Gonzalez should be able to sign as part of this coming summer’s July 2 period, though he will first have to go through the process of establishing residency in a third country.
Publicado por Unknown en 5/29/2015 11:11:00 a. m. No hay comentarios: 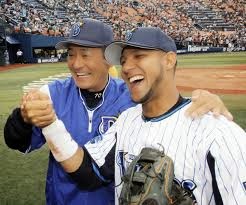 The Japan Times
NISHINOMIYA, HYOGO PREF. – Sixty years have passed since Roberto Barbon touched down in Japan for the first time in what he thought would be a two-year stepping stone on the way to playing baseball in the major leagues.
A native of Cuba, Barbon arrived in February 1955 to join the Hankyu Braves, the forerunners of the current Orix Buffaloes, for whom he still works. Barbon was Nippon Professional Baseball’s first Latin player, a 21-year-old whose dream of playing in the big leagues was something his Japanese teammates could not share. His stay became a lifetime, during which the country’s game became exposed to the world and young Japanese men now grow up sharing the dream of playing in the majors that brought him here in the first place.
“My father cut sugar cane,” Barbon told Kyodo News earlier this month near his home in Nishinomiya, Hyogo Prefecture. “My brothers helped my father. I never worked in Cuba. I was lucky. During the week, I went to school. On Saturday and Sunday, I played baseball, only baseball.”
Barbon, known everywhere in Japan as “Chico-san,” said he was discovered by legendary baseball man Al Campanis, who signed him and sent him to play in North America in the Dodgers organization. There the boy who idolized late Cuban outfielder Minnie Minoso got as high as class C, a few rungs below the majors.
“In Cuba, there are a lot of differences (in terms of racial variety), so I didn’t care too much about it,” Barbon said. “In America it was different. California was like Cuba, but my first year I went to Georgia, Milledgeville, then on to Atlanta, then Macon. It was tough out there in the early ’50s. It was really tough.”
After hitting .283 in a 1954 season split between Hornell, New York, and Bakersfield, California, the Dodgers wanted to send Barbon to Tennessee, back to class D in the racially segregated South. Fed up, he wanted to go back to Cuba, but instead got an offer to play for Hankyu.
“A friend of mine before I left Cuba, he used to go to the States. He said, ‘Don’t worry about it. It’s like Hawaii, like the Philippines.’ So, when I got to Hawaii, I bought Hawaiian shirts. It was the beginning of February, when I landed at Haneda, I looked around and saw everything was white, and I was thinking, ‘What’s up with this?’”
At Hankyu’s training camp in Kochi, there was also snow on the ground, and his new teammates were practicing in it.
“I said, ‘I can’t play ball here. It’s too cold. I’m going,” Barbon said.
But instead of leaving, he made an impact. In his debut season, the second baseman stole 49 bases and became the first Pacific League middle infielder to score 100 runs in a season.
Barbon built an impressive career in the Pacific League, playing in 1,353 games over 11 seasons, the first 10 with the Braves and his final one with the Kintetsu Buffaloes. After that he worked as a coach and then an interpreter. During that time, the amiable Cuban said he was never ejected — although one reason might have been the language barrier.
“I never got angry,” he said. “OK, in the beginning, I didn’t speak the language. So I used to say everything in Spanish, they didn’t understand what I’m saying: ‘What are you talking about?’ “
He learned Japanese, however, and eventually had to deal with Hall of Fame catcher Katsuya Nomura distracting batters by constantly talking to them.
“Every time you stepped into the batter’s box, Nomura would be talk, talk, talking to you,” Barbon said. “I’d say shut up man, shut your mouth — in Japanese.”
And though the PL was loaded with stars, the schedule was hard, train travel was slow, double headers were frequent and fans were scarce as baseball played second fiddle to professional wrestling.
Japan’s wrestling boom was inspired by the stage-managed heroics of a Korean former sumo wrestler, Rikidozan, who was promoted as a Japanese hero. Barbon got a taste for wrestling’s popularity when he remarked to a writer that Rikidozan’s matches were obviously decided in advance. His comments ended up in the paper, and Rikidozan, who had strong organized crime connections, was reportedly furious.
“The guy interviewed me, and we were just talking. I didn’t think it would go in the paper. If he told me, ‘I’m going to write,’ (then) I’m not going to say that,” said Barbon, who helped settle the matter by writing an apology to the superstar. “I was afraid to go to Tokyo.”
But that was an isolated incident in what has been a joyful existence.
“I love this country,” said Barbon, who now conducts youth baseball clinics for Orix and whose principle advice to new guys here is to just get used to things.
“You’ve got to get accustomed. The practice is too long, you know, but you’ve got to do it. It’s tough to get accustomed to the way the Japanese practice. You’ve got to play by their rules or hit 40 dingers. But if you get accustomed, you’ll be here a long time.”
Publicado por Unknown en 3/28/2015 05:39:00 p. m. 1 comentario: 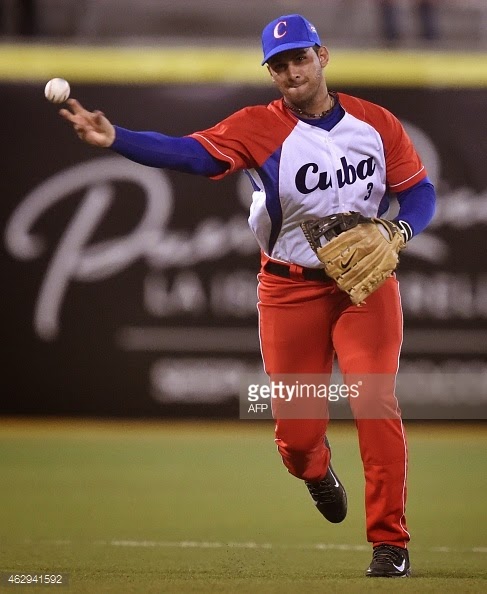