Obama’s National Security Advisor, Susan Rice, fell for a social media hoax on Monday, posting that a famous Nigerian writer had died that day. But in fact, the author died two years ago.

On Monday morning, Rice tweeted her condolences to the Nigerian people for the death of Chinua Achebe, who authored the famed Nigerian classics “Things Fall Apart” and “Arrow of God.”
“A giant of African lit., he brought the Continent–and Nigeria, in particular–2 the world. His works left lasting impression on me & my gen.,” Rice tweeted.
Obama’s security adviser then added, “Despite the promise of the future, today is a somber day in Nigeria, as Chinua Achebe was laid to rest in his native village.”
The only problem is that Achebe died back in 2013.
Rice made this mistake despite being the top Africa adviser in the State Department from 1997 to 2001. With that background, one might assume Rice would be keeping up on news in Africa, especially since she is now one of Obama’s top advisers.
Follow Warner Todd Huston on Twitter @warnerthuston or email the author at igcolonel@hotmail.com. 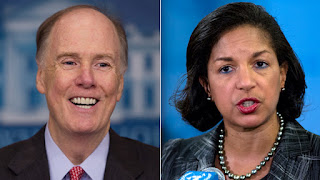 Susan Rice, the U.S. ambassador who drew criticism for her initial account of the Benghazi terror attack, has been named as national security adviser, a senior White House official confirmed to Fox News.
Rice will replace Tom Donilon, who is resigning from the post. Rice, the current U.S. ambassador to the United Nations, does not need Senate confirmation for the job.
The ambassador had earlier been considered in the running for the secretary of State post, which does require confirmation, but withdrew from consideration amid the continuing fallout over her role following the Benghazi attack.
Rice went on five Sunday shows after the attack and claimed it was triggered by protests over an anti-Islam film, an explanation many lawmakers said at the time was inaccurate. The administration later acknowledged there were no protests on the ground in Benghazi, though they have not officially ruled out that protests elsewhere may have played a role.
Republicans bristled at the news that Rice was being named to the new position. Sen. Rand Paul, R-Ky., accused her of "misleading" the public on Benghazi.
"How are they going to have the authority for people to believe what they're saying, when he's promoting someone who directly and deliberately misled the public over Benghazi?" Paul said on Fox News.
Rice's defenders dispute that charge.
The administration, under pressure from the media and Republicans, last month released the so-called "talking points" which showed officials drafting and re-drafting their storyline in advance of Rice's appearance. The intelligence community did cite demonstrations -- however, references to militant and Islamic extremist groups, and to prior security warnings and incidents, were ultimately stripped out after objections from various administration officials.
It's unclear what level of involvement Rice had in this process. Officials, speaking in her defense, have said she was merely citing the assessment she was given on Sept. 16.
A senior official told Fox News that Donilon decided to leave the post after his wife took a job that involves a lot of foreign travel. He has been in the administration since the start, first as deputy national security adviser.
Former Obama aide Samantha Power is expected to be named to succeed Rice as U.S. ambassador to the U.N. Power was an aide to the Obama campaign in 2008 but resigned after a report was published in which she called then-candidate Hillary Clinton a "monster."

Is Susan Rice "Bad for Congo"

Kambale Musavuli: Susan Rice's record on Africa suggests as Secretary of State, she would side with dictators and US allies Rwanda and Uganda against the people of Congo.