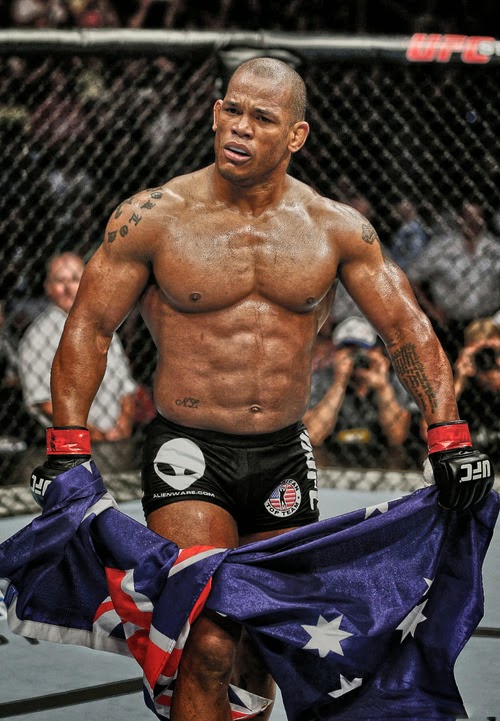 UFC welterweight Hector Lombard has tested positive for an anabolic steroid in a test he submitted after defeating Josh Burkman at UFC 182 on Jan. 3 in Las Vegas.
Nevada State Athletic Commission executive director Bob Bennett confirmed the results to ESPN.com on Tuesday. MMA Fighting first reported Lombard's failed test.
Lombard (35-4-1) tested positive for desoxymethyltestosterone, according to lab reports. The sample was collected Jan. 3 and reported to the NSAC on Jan. 13.
News of the failed test comes immediately after the UFC announced on Tuesday that a scheduled fight between Lombard and Rory MacDonald at UFC 186 on April 25 had been canceled. The UFC did not provide details on why the bout had been pulled at that time.
UFC director of communications Dave Sholler acknowledged to ESPN.com that Lombard was removed due to the failed test. The UFC is exploring new options for MacDonald.
A former Bellator MMA middleweight champion, Lombard signed with UFC in 2012 and dropped to the welterweight division in 2013. He has compiled a 3-0 record since, aligning himself toward a potential title shot in 2015.
He faces a fine and suspension due to the failed test. His unanimous decision win against Burkman will likely change to a no-contest.
Burkman (27-11) commented via Twitter shortly after the news broke.
Publicado por Unknown en 2/10/2015 06:02:00 p. m. No hay comentarios: Enlaces a esta entrada

An hour rarely goes by when Yoel Romero doesn't think about all he has left behind.
The UFC middleweight contender defected from Cuba to Germany in 2007 following a wrestling tournament in the country. Romero had relatives who lived in Germany and also knew it would be hard for him to pursue an MMA career had he remained in Cuba.
When he relocated, though, Romero had to say goodbye to his mother, father and a child.
"It's never going to stop hurting," Romero told FOX Sports in a recent interview through an interpreter. "It's always going to hurt."
Romero's story is unlike some others. He calls his defection "pretty simple." Romero competed in a wrestling tournament in Germany and ended up staying there for years. He met a woman there and married her. They had a daughter.
But if Romero, 37, wanted to continue his MMA journey, he had to move to the United States. The competition level in Germany and nearby Poland was weak. Romero, with his Olympic wrestling silver medal pedigree and boxing experience, was rapidly becoming a big fish in a small pond.
“It's never going to stop hurting. It's always going to hurt.”
-Yoel Romero

"I love Germany," Romero said. "Unfortunately I had to leave, because there wasn't any MMA clubs where I could train and continue to learn there."
That brought him to American Top Team in Coconut Creek, Fla. Romero, his wife and daughter live in nearby Miami, which is a great fit for him, since there is a large Cuban and Hispanic community.
Being at ATT has helped "Soldier of God" become a top UFC middleweight. Romero (9-1) is ranked No. 6 among 185-pounders in the organization. After knocking out Tim Kennedy at UFC 178 on Sept. 27, Romero could be just one win away from a title shot.
His goal since starting MMA was to become a UFC champion, but Romero has another goal, too, and that's to be reunited with the people he is missing in Cuba.
"Of course, I plan on becoming an American citizen and bringing over my family," Romero said.

Though he is closer to 40 years old now than he is 30, Romero is still evolving, as a fighter and as a person. Following UFC 178, Romero conducted multiple interviews in English for the first time. Learning the language is important to him. When he lived in Germany, he learned to speak fluent German and he is applying himself currently to English.
"I need it for my job, I need it for the fans," Romero told FOX Sports in English. "I want to, when I say things on TV, to talk to the people in English. That's the respect of the people in the country you live."
Romero is well on his way to becoming a full-fledged American. But he'll always keep his pride for Cuba and the memories of leaving there -- even if his family joins him in Miami one day.
"It's something that will continuously hurt the rest of my life," Romero said.
Publicado por Unknown en 10/10/2014 05:48:00 a. m. No hay comentarios: Enlaces a esta entrada 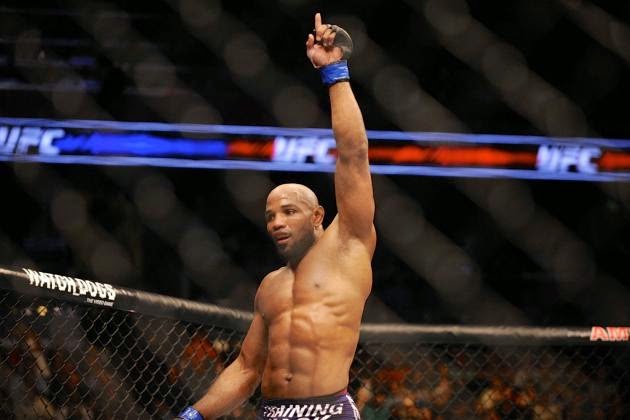 UFC on Fox 11's main card kicked off with a highly anticipated bout between fast-rising middleweights Yoel Romero and Brad Tavares. Romero entered the night with an impressive three-fight knockout streak while Tavares was riding high after winning five fights in a row.
When the two faced off, Romero absolutely mauled Tavares with powerful, physical wrestling. Romero took Tavares down at will, ragdolling him with powerful takedowns and cracking him repeatedly with huge punches and elbows.
So what did we learn?

Romero Has the Tools to Win the Belt
I'll probably look back on this and laugh in a few weeks. I feel this way right now, though.
Yoel Romero has what it takes to win a belt.
That isn't to say that Romero would necessarily beat Chris Weidman. But between his Herculean wrestling, raw punching power and legitimate athleticism, there isn't anybody that would really be immune to Romero's home invasion-like fighting style.
The Cuban lacks the cardio right now, and he is still very raw, but he has the tools. He just needs to sharpen them a bit.

Tavares' Time Isn't Now
There's no real way around this. Tavares is a grinder who just found himself out-wrestled in every conceivable way. He was out-struck, out-clinched and out-muscled.
Tavares is 26 years old and had an impressive 7-1 UFC record entering the night. With a five-fight winning streak, he was on the verge of forcing his way into the title picture. But Romero completely tossed that notion to the wind.
The Hawaiian has obvious skills and is young enough to make plenty of runs at the belt. Right now, though? It isn't his time.

Romero Needs to Fight a Top-10 Guy
Romero vs. Tavares made sense. Now, though, it's time to determine whether or not Romero is actually a title contender or just a sort of middleweight Gleison Tibau.
There are plenty of potential opponents for Romero. Tim Kennedy, Ronaldo "Jacare" Souza and the winner of Luke Rockhold vs. Tim Boetsch all make sense.

The UFC Was Smart in Building Romero
Seriously, while I criticize the UFC a lot for how it sets up cards, it has given Romero the opportunities and exposure to succeed with the spotlight on him, and it has paid dividends.
Right now, Romero is a star. He isn't the most accomplished fighter by any means, but he is somebody fans want to see and somebody that the UFC can use to break into a new market, specifically Cuba.
It will be interesting to see where the UFC will end up putting him next.
Publicado por Unknown en 4/20/2014 02:57:00 p. m. No hay comentarios: Enlaces a esta entrada