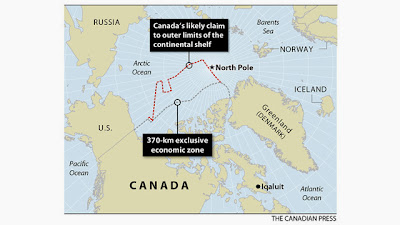 Canada’s prime minister has ordered the inclusion of the North Pole in the country’s Arctic claim after it was excluded from a proposed UN submission, a newspaper reported Wednesday.
Canada will still meet a December 6 deadline for filing an application to the United Nations to extend its northern sea boundary, according to the daily Globe and Mail.
But it now also plans to follow up with a broader claim that includes the geographic North Pole once additional surveying, analysis and paperwork is completed, it said.
The newspaper cited senior government officials as saying Prime Minister Stephen Harper gave the order to bureaucrats after seeing a draft of the UN submission.
Harper’s office declined to comment on the report, telling AFP only that “Canada is in the process of securing its sovereignty over the north.”
Canadian sovereignty over the far north has been a key plank of Harper’s Tories since his government was first elected in 2006.
Every summer in recent years, Harper has traveled to the region to observe Canadian military exercises the harsh environment.
Canada, Denmark, Norway, Russia and the United States claim overlapping parts of the region believed to be rich in hydrocarbons, and have been rushing to gather evidence in support of their respective claims.
Rising temperatures have boosted interest in the polar region, as melting ice opens up shipping routes and makes hitherto inaccessible mineral resources easier to exploit.
According to the US Geological Survey, the Arctic seabed is thought to hold about 90 billion barrels of oil and 30 percent of the world’s undiscovered gas resources.
The North Pole seabed itself is not believed to hold large reserves but has symbolic value for the countries in the region.
Nations bordering the Arctic currently are entitled to a 200 nautical mile economic zone from their coastlines, but claims for extending their territories will be decided under the United Nations Convention on the Law of the
Publicado por Unknown en 12/05/2013 03:41:00 p. m. No hay comentarios:

By Miguel Llanos, NBC News
The amount of summer sea ice in the Arctic has reached a record low in three decades of satellite data, scientists reported Tuesday, with one of them describing recent warm years there as creating a "less polar pole." The decline was expected to continue for at least several more days before cold weather sets in and creates new ice through fall and winter.
The area of Arctic waters covered by sea ice was measured at 1.58 million square miles on Sunday, the National Snow and Ice Data Center (NSIDC) reported. That's below the previous record low of 1.61 million square miles set on Sept. 18, 2007, and in line with earlier expectations for the season.
"Including this year, the six lowest extents in the satellite record have occurred in the last six years," the center noted on its website. 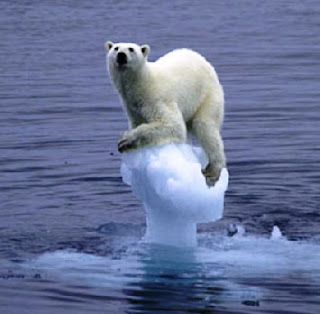 By Pete Spotts Staff writer
Christian Science Monitor
Global warming has brought a "new normal" to the Arctic, with warmer air and ocean temperatures, thinner and less expansive summer sea ice, and greener vegetation in coastal regions abutting the open water.
In addition, longer periods of open water during the annual sea-ice melt season is allowing the ocean to take up more carbon dioxide from the atmosphere, leading to seasonal bouts of ocean acidification in some areas.
These broad observations, along with more-detailed looks at some 32 environmental indicators, appear in the National Oceanic and Atmospheric Administration's 2011 Arctic Report Card, released Thursday.
The changes have wide implications, from opening new sources of offshore oil, gas, and minerals to speeding the release of heat-trapping methane into the atmosphere as permafrost melts.
Even on a continental level, changes in atmospheric circulation patterns at the top of the world can affect the intensity of winter weather well into the lower latitudes.

By Julio Godoy
The possibility of exploiting the hitherto inaccessible natural resources of the Arctic Ocean is becoming increasingly tangible with the thawing of the North Pole, much to the alarm of European scientists. Recent measurements by the Alfred Wegener Institute for Polar and Marine Research (AWI) confirm that the melting of sea ice in [...]

OurAmazingPlanet Staff,
LiveScience.com Ouramazingplanet Staff,
livescience.com
The Arctic sea ice's summer disappearing act may get all the attention, but winter sea ice is disappearing too.
This year, the sea ice cover during February tied the all-time low for the month, due in part to the same climate pattern that brought cold air unusually far south this winter in the United States. (The same pattern could bring severe weather this spring.)
February 2011 tied February 2005 for the lowest ice extent on satellite record during the month of February, according to the U.S. National Snow and Ice Data Center (NSIDC).

Climate researchers have long warned that the Arctic is particularly vulnerable to global warming. The dramatic shrinking of sea ice in areas circling the North Pole highlights those concerns.
A new report finds that the disappearing ice has apparently triggered another dramatic event - one that could disrupt the entire ecosystem of fish, shellfish, birds and marine mammals that thrive in the harsh northern climate.
More

On the evening of February 17th, the Icelandic containership Godafoss ran aground in the Hvaler national park in southern Norway and started leaking heavy oil. One of the biggest challenges of the cleanup operations has been to clean up oil from ice covered areas. This clearly illustrates that we can’t let the oil industry move into the Arctic.

I know that coastline well and I have been there with the Rainbow Warrior to document the unique cold-water coral reefs in the area. The same summer the Norwegian government decided to make the area a national park – the only one at sea. This national park is home to more than 6000 marine species - around 220of which are on the Norwegian national redlist of endangered and threatened species. Yesterday I visited the same area but on a coast guard ship struggling to get oil up from the ice.