Leftist Nazis, the Gaystapo, and Islamofascists

By Jim ONeill*
“One of the ways you control what people think is by creating the illusion that there’s a debate going on, but making sure that that debate stays within very narrow margins. ...you have to make sure that both sides in the debate accept certain assumptions….”—Noam Chomsky

“[Nazism] is simply collectivism freed from all traces of an individualist tradition which might hamper its realization.” —F.A. Hayek (1899-1992) “The Socialist Roots of Naziism"from “The Road to Serfdom”
“All within the state, nothing outside the state, nothing against the state.”—Benito Mussolini, Fascist dictator (1883-1945)
Recently I came across several references to “the far right Nazis,“and “the far right Fascists.“Although this is a subject I have covered before, it will continue to be a topic of great importance for as long as the Left continues to lie about it, and people swallow their lies.
Fascism always has been, and always will be a left-wing ideology—period. That means that the Nazis, being a subset of Fascism, are left-wing as well. I cannot stress enough the importance of understanding this truth.
The oft repeated lie that Fascism and the Nazis are right-wing has effectively served three important purposes:
I am not claiming that Communism and Fascism are the same thing—they are not. They are, however, variations on the same theme—the theme of collectivism. That is, they both promote Big Government at the expense of individual freedom. As such, they both belong on the left side of the political spectrum.
The media has long promulgated the myth of a political spectrum that looks something like this: Far-Left (Communists)—————-Moderates—————Far-Right (Fascists).
What is wrong with that picture? What is wrong with it is that the true political spectrum looks like this: At the far left of the political spectrum we have collectivist ideologies such as Communism and Fascism, then moving to the right we find Socialism, then the Moderates. On the right side of the spectrum we move from the Moderates to Conservatives (who favor a Constitutional, or limited, form of government), and finally at the far right we find the true anarchists, who favor no government at all (not to be confused with faux-anarchists, who wish to tear down existing governments so that they can replace them with other forms of government).
In short, the political spectrum moves from Big Government on the far left, to no government on the far right, with the size and influence of government decreasing as one moves to the right, and vice versa. Fascism belongs squarely on the left side of the spectrum.
Benito Mussolini (who was raised on Marxist philosophy) essentially brought Fascism onto the world stage—so perhaps if I rephrase Mussolini’s quote from above it will make how Fascism views the role of government clearer:
“Everything within the federal government, nothing outside the federal government, nothing against the federal government.”
One notable Fascist element within the left-wing is the “Gaystapo,“or homo-Fascists. Scott Lively, co-author of “The Pink Swastika,“describes the movement thusly:

Homo-Fascism is a form of extreme left-wing radicalism which attempts to establish rigid totalitarian controls over public discussions and policies addressing sexual morality, and to punish or suppress all disapproval of homosexuality and related sexual behaviors. ... Where pro-family speech and other activities are not yet constrained by law, homo-fascists employ bullying and other intimidation tactics to silence opponents and manipulate policy makers, all while posing as victims.”—Dr. Scott Lively

Although leftists will, as a matter of course, reject whatever Scott Lively may say, they will have a harder time dismissing what self-described “gay left-wing man,“Johann Hari has written regarding homo-Fascists:

“The twisted truth is that gay men have been at the heart of every major fascist movement that ever was—including the gay-gassing, homicidal Third Reich. [Almost] all the most high-profile fascists in Europe in the past 30 years have been gay. It’s time to admit something. Fascism isn’t something that happens out there, a nasty habit acquired by the straight boys. It is—in part, at least—a gay thing, and it’s time for non-fascist gay people to wake up and face the marching music.”—Johann Hari “The Strange, Strange Story of the Gay Fascists”

Let me hasten to add that I am not saying that the entire homosexual community is homo-Fascist. They are nothing of the sort, and I do not wish to imply such—but there most certainly is a militant minority, a sub-set, of homo-Fascists whose presence can be traced back prior to the rise of Hitler, then permeating the Nazi hierarchy, and continuing up to the present day. These über-masculine homosexuals are anything but effeminate.
Further weighing down the left side of the political spectrum are the Islamofascists who are, of course, not right-wing in any way, shape, or form—why do you think the Far-Left finds it so easy to climb into bed with them? This “Odd Couple” marriage-of-convenience between the atheistic Left and the religious collectivism of Islam is bound to end badly for one side or the other (possibly both), but for now it suits both of their anti-freedom agendas to a “T.”
I bring all the above to our attention because, as Chomsky implies in the quote at the top of this article, we can argue and debate all day within certain parameters and be doing nothing but spinning our wheels. The debate that “we the people” have been handed to wrangle over, amounts to which form of leftist collectivism we prefer—Socialism, Fascism, or Communism? That is—Left, or more to the Left. “We the people"must refuse to buy into that trap, and resolutely and unabashedly stand up for America; for freedom, for God, and our Constitutional rights.
Death camps, the Gulag, mass-starvation tactics, “killing fields” et al. can all be laid at the feet of left-wing collectivist ideologies—millions upon millions of corpses. Who is left to stand against this tide of Machiavellian duplicity, arrogance, and greed; this tsunami of brutality, barbarism, and death?
To paraphrase Hillel the Elder: If not us, then who? If not now, then when?
------------------------------

*Born June 4, 1951 in Philadelphia, Pennsylvania. Served in the U.S. Navy from 1970-1974 in both UDT-21 (Underwater Demolition Team) and SEAL Team Two.  Worked as a commercial diver in the waters off of Scotland, India, and the United States.  While attending the University of South Florida as a journalism student in 1998 was presented with the “Carol Burnett/University of Hawaii AEJMC Research in Journalism Ethics Award,” 1st place undergraduate division.  (The annual contest was set up by Carol Burnett with money she won from successfully suing a national newspaper for libel).  Awarded US Army, US Navy, South African, and Russian jump wings.  Graduate of NOLS (National Outdoor Leadership School, 1970).  Member of Mensa, and lifetime member of the UDT/SEAL Association.
Publicado por Unknown en 4/27/2013 06:09:00 p. m. No hay comentarios: Enlaces a esta entrada 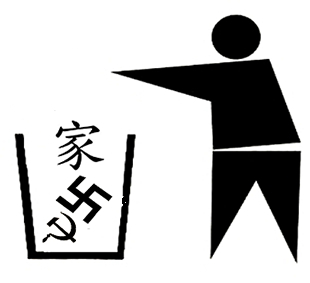 Pulp Fascism: The Girl with the Dragon Tattoo

PJ Media/
The original title of the massive bestseller The Girl with the Dragon Tattoo was “Men Who Hate Women.” Its author, Stieg Larsson, intended to leave his fortune to the Communist Party when he died in 2004 (though a mistake in his will prevented that from happening). If you are unfamiliar with the story (which was, along with the rest of the trilogy, made into a successful series of Swedish films released in the U.S. last year), put your expectations for subtlety at the level marked “undergraduate.” This series of potboilers, like The Silence of the Lambs, involves a serial killer, sadism, women in peril, a secret cell where awful things happen to captured victims, and an unusual crime-solving partnership between a man and a woman. What it doesn’t offer is the slightest instance of plausibility, psychological depth, or even clever dialogue. And as directed by David Fincher, the Hollywood version of The Girl with the Dragon Tattoo isn’t far from being rated X.
The young woman of the title, played by Rooney Mara (who is best known for having played the exasperated girlfriend of Mark Zuckerberg at the beginning of Fincher’s last movie, The Social Network), is a mohawked, multiple-pierced (even, as we learn, in her nipples) Swedish punk computer hacker named Lisbeth Salander. At the start of the film, she is hired to investigate Mikael Blomkvist (Daniel Craig), a crusading journalist who has just lost a major libel lawsuit against a corporate giant who, like all capitalists in the film, obviously came by his fortune dishonestly.
Salander has a history of antisocial behavior and petty crime, so she can only access a trust fund meant to support her if she can prove she is an upstanding citizen to a court-appointed guardian who naturally takes the opportunity to tell the girl she can’t have the money unless she provides oral sex to him. Whether it would be wise to ask a violent and hostile person to perform this task against her will is one of many legitimate questions the movie simply ignores in its quest to provide an ever more-revolting series of gruesome images. This scene is only the first of what will turn out to be three unbelievably sick and lurid encounters between the pair, but don’t worry: Lisbeth is capable of defending herself. More >>
Publicado por Unknown en 12/22/2011 02:52:00 p. m. No hay comentarios: Enlaces a esta entrada