TIRANA, Albania –  Tens of thousands of Albanian opposition supporters marched peacefully through the capital Friday to demand that the government resigns over corruption allegations, almost a month after four people died when a similar demonstration turned violent.
Hundreds of police guarded the main government building in Tirana, where dozens of protesters and police were injured in the Jan 21 riot.
The opposition Socialists are demanding that conservative Prime Minister Sali Berisha hold early elections over allegations of corruption and vote rigging in the 2009 general election.
Read more: http://www.foxnews.com/world/2011/02/18/albanian-opposition-holds-new-anti-govt-protest/#ixzz1ELFBnzIk
Publicado por Unknown en 2/18/2011 02:51:00 p. m. No hay comentarios: Enlaces a esta entrada

From Altin Raxhimi, CNN
On Sunday, Albanian opposition leader Edi Rama gives a speech during a ceremony for a man killed during riots.
STORY HIGHLIGHTS
Tirana, Albania (CNN) -- The showdown between Albania's ruling government and its political opposition showed no signs of abating Sunday, with Socialist Party leader Edi Rama calling for yet another demonstration despite fresh threats from the nation's prime minister.
Rama, also the mayor of the capital city, Tirana, on Sunday promoted a protest at 2 p.m. Friday to decry alleged corruption and demand the resignation of Prime Minister Sal Berisha. This would be exactly one week after tens of thousands rallied for the same cause in Albania's capital, leading to the deaths of three people after some protesters clashed with government forces.
"My life is not more precious than that of the three Albanians you killed," Rama said, referring to the prime minister who has consistently singled out the Socialist Party leader for blame. "Berisha has committed a coup d'etat by using the government to subdue, violate and annihilate justice."
The opposition has accused police of provoking protesters. But Berisha had said demonstrators instigated the violence in a bid to take over his office as well as parliament and key ministries. 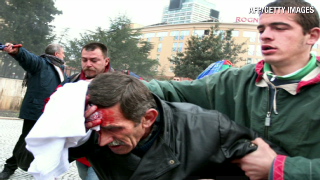 Protest turns deadly in Albania
In a televised government meeting Sunday, Berisha said that Rama would be held accountable if there was, in his view, yet another attempt to attack government institutions.
"Any attempt from him for violence against (government) institutions will face exemplary punishment, and it will be him and nobody else," the prime minister said Sunday, vowing to give amnesty to all others involved in the demonstrations. "If you try again to besiege the prime minister, you will find what a bandit that ambushes you deserves."
The Socialist Party claimed that around 250,000 people had gathered outside Berisha's office to implore him to resign. Some threw stones and Molotov cocktails at the more than 1,000 security personnel at the scene, who used water cannons and tear gas to disperse the crowd.
On Sunday, Berisha updated the toll from that demonstration -- saying 27 policemen and 81 national guard members were hurt in the confrontations. The Socialist Party, meanwhile, claims 46 protesters suffered injuries, including one who is still in critical condition, with a few protesters hit by gunfire.
A special parliamentary panel is being convened, at the request of Berisha's ruling party, to formally determine who is to blame for Friday's violence.
Berisha said police refused to abide by an order from Albania's prosecutor general to arrest six commanders of the country's national guard, saying they did so because the prosecutor general's office has been biased in the opposition's favor.
At least 113 people already have been arrested and charged with confronting riot police and destroying property, according to a statement from Tirana police. In a meeting Sunday with leaders of state police units, Interior Minister Lulzim Basha said these forces would continue working to maintain public order and keep the peace, state-run news agency ATA reported.
Nonetheless, after the funeral Sunday for the last of the three killed last Friday, Rama called for yet another protest.
Two of the victims were unemployed, the third was a farmer, and each of them had two children, according to the Socialist Party website. All were shot to death at close range, Tirana Military Hospital emergency chief Sami Koceku said -- a claim that the opposition disputes.
Berisha said that a counter demonstration, in which he'd be among those speaking to his supporters, would be held next Saturday. This rally had been set for Wednesday, but was pushed back since the prime minister will attend a conference Thursday in Strasbourg, France.
The recent clashes and back-and-forth allegations are set against the backdrop of a longstanding political stalemate tied to a disputed June 2009 election, one that international diplomats are pushing hard for Albanian leaders to resolve peacefully.
The country's supreme court determined that the elections were valid, and the ballots were burned by the Central Election Commission. And on Friday, Berisha vowed that there would "be no early elections" and that "general elections will be held in 2013" -- rebuttal to a proposal being pushed by the opposition.
Rama, for his part, on Sunday stood by his claims that Berisha's ruling party had stolen the previous election and vowed to fight on.
"I am in this battle together with others (and we) will not leave half way -- the battle for an Albania in which one votes freely, a country where the government depends on the people and not where the people depend on the government," he said.
Already-high tensions in the southeastern European nation escalated in recent weeks when a former government minister sent the media a secret recording that allegedly documented an illicit back-room deal involving government contracts and other ministers in Berisha's administration.
In addition to the increasingly pointed, accusatory barbs between Rama and Berisha, personal slurs marred a parliamentary session this week meant to settle governmental changes following the resignation of a minister central to that video.
Berisha met Sunday with U.S., UK and EU ambassadors, among other diplomats, all of whom have publicly called for calm and dialogue between rival parties.
"We have repeatedly urged Albania's political leaders to search for compromise," U.S. Ambassador Alexander Arvizu, who also met Albanian President Bamir Topi, said Saturday. "When one side -- or both -- insists on maximalist positions that it knows the other side cannot accept, I'm sorry, that's not compromise. Resolving political differences through street battles is also not compromise, and does not reflect the democratic aspirations of Albanians."

"It's time to desist from further provocations," he added. "It's time to stop the mutual recriminations and name-calling."
Publicado por Unknown en 1/23/2011 08:34:00 p. m. No hay comentarios: Enlaces a esta entrada

Arrests, strong rhetoric in Albania despite calls for compromise 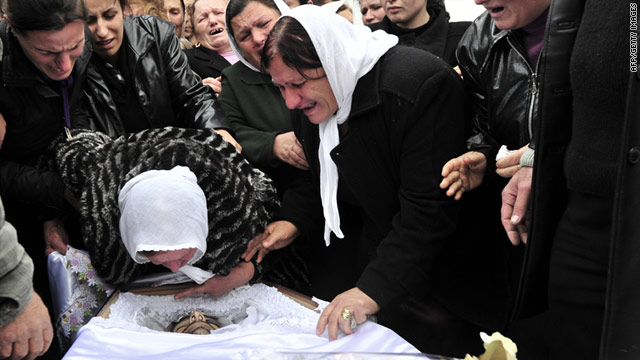 Arrests, strong rhetoric in Albania despite calls for compromise
By the CNN Wire Staff
January 23, 2011 -- Updated 0210 GMT (1010 HKT)
Relatives grieve over the body of Herukan Deda, 40, in Laknas on Saturday a day after a deadly riot that killed Deda and two others.
STORY HIGHLIGHTS
(CNN) -- Despite international calls for calm and negotiations, Albania's ruling government continued Saturday to levy sharply-worded rhetoric against its opposition and arrested 113 people following a massive Friday protest that turned violent, state-run media reported.
Those arrested were charged with confronting riot police and destroying property during Friday's demonstration in Tirana, a city police spokeswoman told reporters, according to the state-run ATA news agency.
Three protesters were killed -- all shot at close range, according to Tirana Military Hospital emergency chief Sami Koceku.
The clashes left at least 35 civilians and 27 police hurt, the state-run TVSH network reported.
"Yesterday was a terrible day for Albania," U.S. Ambassador Alexander Arvizu said Saturday. "There were no winners. There were only losers." 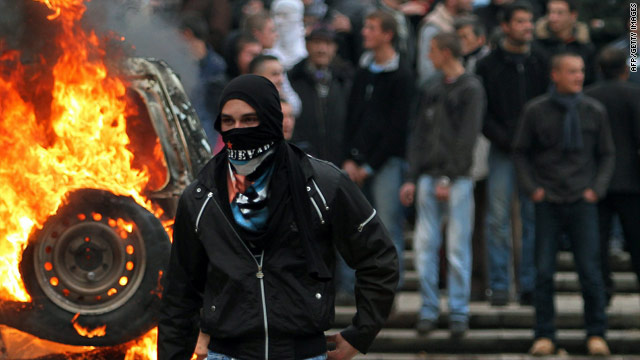 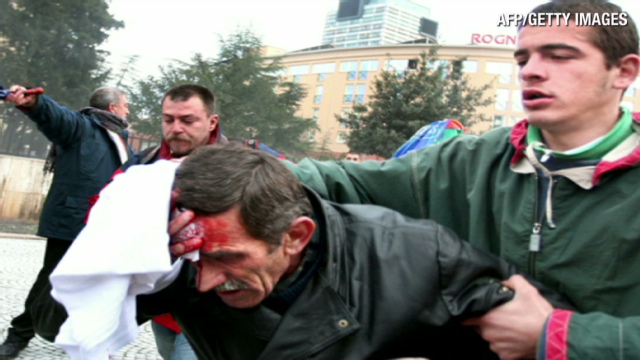 Albanian anti-govt. protest turns deadly
The opposition Socialist Party claimed, on its website, that around 250,000 people had gathered outside Prime Minister Sali Berisha's office to implore him to resign. Some protesters threw stones and Molotov cocktails at the more than 1,000 police at the scene, who used water cannon to disperse the crowd.
The Socialist Party blamed police for provoking protesters by using the water tanks and tear gas. But on Saturday, Berisha again accused his rival Edi Rama, Tirana's mayor and the Socialist Party head, of spearheading the violence.
He claimed that demonstrators were trying to takeover the prime minister's office, parliament and cabinet ministries.
"Those behind the putsch and bandits will receive the deserved punishment," he told reporters, according to ATA. "No force in this world can take over the democratic institutions of Albania, a NATO member country."
Earlier this month, in an interview quoted in a Socialist Party newsletter, Rama reiterated long-standing claims that Berisha's ruling Democratic Party had rigged the June 2009 election.
"Are there any Albanians who have not yet understood that (Berisha) stole the elections in order to rob Albania?" he said.
The country's supreme court determined that the elections were valid, and the ballots were burned by the Central Election Commission.
The Socialist Party boycotted Albania's parliament between September 2009 and February 2010, according to the U.S. State Department. Reconciliation efforts since then have been unsuccessful, with opposition parties continuing to push hard against the Democrats in alleging corruption.
The tensions escalated in the past two weeks, after a former government minister sent the media a secret recording that allegedly documented an illicit back-room deal.
In addition to the increasingly pointed, accusatory barbs between Rama and Berisha, personal slurs marred a parliamentary session this week meant to settle governmental changes following the resignation of a minister central to that video.
On Friday, Berisha vowed that there would "be no early elections" and that "general elections will be held in 2013," a rebuttal to a proposal being pushed by the opposition
Such entrenched stances, the strong language and Friday's violence came as diplomats outside Albania continued to push for a peaceful solution to a southern European nation's stalemate. Rama, then the nation's president, was the focus of the last such severe unrest in 1997, when angry mobs protested voting irregularities and government-backed Ponzi schemes that plunged Albania into near anarchy.
Albania's current president, Bamir Topi, met Saturday with prominent U.S., U.K. and European diplomats. A day earlier, he'd urged all parties to resume talks soon and not to reopen old wounds.
"We have repeatedly urged Albania's political leaders to search for compromise," said Arvizu, one of those who met with Topi. "When one side -- or both -- insists on maximalist positions that it knows the other side cannot accept, I'm sorry, that's not compromise. Resolving political differences through street battles is also not compromise, and does not reflect the democratic aspirations of Albanians."
"It's time to desist from further provocations," he added. "It's time to stop the mutual recriminations and name-calling."
Those remarks echoed similar ones the previous day from the European Union, which has been considering adding Albania as a member. On Saturday, a key member of the EU's parliament said the recent escalation of tensions could hinder that development.

"I hope that, in this critical moment, the politicians will show maturity and will engage ... in finding a compromise solution," said Eduard Kukan of Slovakia.
Publicado por Unknown en 1/22/2011 09:27:00 p. m. No hay comentarios: Enlaces a esta entrada