Researchers at Australia's CSIRO have developed a hand-held, spring-loaded laser scanner that can produce three-dimensional maps with unprecedented speed and accuracy. Called Zebedee after a French, spring-propelled television puppet of the sixties, the scanner fires laser light, giving surveyors and archaeologists a powerful new tool for discovery. By Chico Harlan/
Until Tuesday, North Korea appeared on Google Maps as a near-total white space — no roads, no train lines, no parks and no restaurants. The only thing labeled was the capital city, Pyongyang.
This all changed when Google, on Tuesday, rolled out a detailed map of one of the world’s most secretive states. The new map labels everything from Pyongyang’s subway stops to the country’s several city-sized gulags, as well as its monuments, hotels, hospitals and department stores. (See a before and after map comparison of North Korea.)

According to a Google blog post, the maps were created by a group of volunteer “citizen cartographers,” through an interface known as Google Map Maker. That program — much like Wikipedia — allows users to submit their own data, which is then fact-checked by other users, and sometimes altered many times over. Similar processes were used in other once-unmapped countries like Afghanistan and Burma.
In the case of North Korea, those volunteers worked from outside of the country, beginning from 2009. They used information that was already public, compiling details from existing analog maps, satellite images, or other Web-based materials. Much of the information was already available on the Internet, said Hwang Min-woo, 28, a volunteer mapmaker from Seoul who worked for two years on the project. Screenshot: Washington Post
North Korea was the last country virtually unmapped by Google, but other — even more detailed — maps of the North existed before this. Most notable is a map created by Curtis Melvin, who runs the North Korea Economy Watch blog and spent years identifying thousands of landmarks in the North: tombs, textile factories, film studios, even rumored spy training locations. Melvin’s map is available as a downloadable Google Earth file.
Google’s map is important, though, because it is so readily accessible.  The map is unlikely to have an immediate influence in the North, where Internet use is restricted to all but a handful of elites. But it could prove beneficial for outsider analysts and scholars, providing an easy-to-access record about North Korea’s provinces, roads, landmarks, as well as hints about its many unseen horrors.

Screenshot: Washington Post
In the country’s northeast, for instance, Google has labeled what it calls the “Hwasong Gulag.” One street, called Gulag 16 Road, cuts through it. And at the end of Gulag 16 Road is a train station. Beyond that, little else around the gulag is marked.
The map’s publication comes just weeks after the visit to North Korea of Google Executive Chairman Eric Schmidt, who toured the country in a series of highly staged encounters that included a stop at a computer library, which Schmidt’s daughter later described in a blog post as the “e-Potemkin Village.” Schmidt’s visit was unrelated to the map roll-out, a Google spokesman said.
Google, in its blog post about the new North Korea map, acknowledged that the information is “not perfect.”
Keep reading on washingtonpost >>
Publicado por Unknown en 1/29/2013 09:26:00 a. m. No hay comentarios: 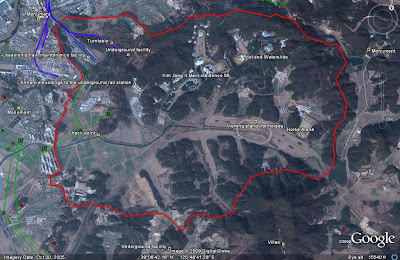