By Diana Nelson Jones
Think Cuba, and images of music, dance, cuisine and the 1959 revolution come to mind. But one of the most pervasive pictures has been hush-hush since Fidel Castro declared racism and all talk of it nonexistent by fiat.
Amid such denial and a lack of legal recourse, pervasive racism has been a silent scourge on 60 percent of the population considered black or mulatto.
A group of Cubans attending AfricAmericas, a six-day event being held here through today, told stories that most U.S. blacks would find familiar, "but it is not like here," said Manuel Cuesta Morua, who has been a tour guide, history teacher and a museum director whose political activism cost him his job. "In Cuba, we are all equal, but [blacks] can't be in the media. We have the same education, but we can't have that job.
"Here there are civic tools" and a justice system that can work, he said. "We have no political or symbolic representation, no access to the emerging economy" and no avenues to leadership positions.
Mr. Cuesta and four other members of Cuba's Citizens Committee for Racial Integration spoke Wednesday to a crowd of 60 at City of Asylum/Pittsburgh on the North Side.
AfricAmericas has featured conversation, film, poetry, photography and cultural exchange highlighting Cuba. A photo exhibition, "Crossing Havana," by Juan Antonio Madrazo Luna is on display from noon to 3 p.m. today at the Young Men and Women's African Heritage Association, 1205 Boyle St., Central North Side.
"It took heaven and earth to get these men here, and not just financially," said Kenya Dworkin, director of Coro Latinoamericano and a professor of Hispanic studies at Carnegie Mellon University. She organized the events in collaboration with the heritage association.
The fact that the Cuban government let black activists travel was historic, she said. The men described their humiliation at the Havana Airport, where they were the only blacks on their flight. Besides being stared at, they were relieved of cameras, CDs, thumb drives and information they were going to share at AfricAmericas.
Asked Wednesday by a woman in the audience if they are at risk, Leonardo Calvo Cardenas, a writer and historian, said, "The risk was there before we came and it will be there when we go back."
They have been arrested, followed and threatened. So far, there has been no physical violence, they said, adding that the government has sewn the fear of self-subjugation into most people.
Mr. Madrazo, coordinator of the Citizens Committee, said the committee is "a pressure group, like a lobby. Racism in Cuba is a political conflict" because of government rhetoric that it doesn't exist. "Now the government admits it but does not show evidence of a will to change the agenda.
"We are grateful for the ability to come here and share a difficult subject that puts Cuba's future in danger."
Two of the men now live in the United States.
Rafel Campoamor Sanchez, who has visited black communities throughout Latin America, was expelled from Cuba as he was trying to organize The Click Festival, an event intended to introduce the empowering possibilities of social media and technology. He is living with his brother in Texas.
"Of all the countries I have visited," he said, "Cuba has the most to overcome" in race relations. "But of 200 million black Latinos, almost all of them live at the base of the social pyramid."
Ms. Dworkin, a Cuban native, said black citizens there have access to education but few are allowed to make the most of it. Besides being segregated by housing, they are consigned to the worst of it.
The theme of "Crossing Havana" is that blacks live in "the other city" of Havana.
Juan Antonio Alvarado Ramos, the editor of ISLAS, a quarterly journal published in Spanish and English, left Cuba in 2000 and lives in Florida. ISLAS deals with racial issues in Cuba and is giving voice to more and more intellectuals.
"ISLAS really worries the Cuban government," Mr. Calvo said. "When the authorities get nervous, it means good things are happening. If people with their disquiet could connect, it would become an explosive island."
He told the crowd Wednesday night, "We feel very stimulated by your interest."
"If in the last few years the government has recognized there is racism, it's because of internal pressure and platforms like the Citizens Committee," said Mr. Alvarado, who is white. "Anti-racism forces are growing. Just the fact that this event is happening attests to that."
AfricAmericas events today: noon to 3 p.m., "Crossing Havana" photo exhibit, Young Men and Women's African Heritage Association, 1205 Boyle St., Central North Side; 4 to 5:30 p.m., Afro-Latin workshops, Frick Fine Arts building, Oakland; 7 to 9:30 p.m., AfricAmericas concert, Frick Fine Arts auditorium, Oakland. 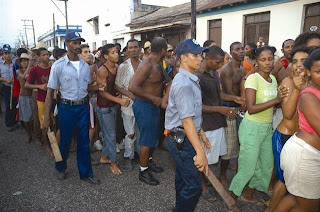 On March 31st, 2009, in a summary of recommendations to a then-new Obama Administration and U.S. Congress ("Do's and Don'ts of U.S. Policy Toward Cuba"), we wrote:

Unlimited remittances to the island risks dividing Cuba's democratic opposition, pitting Cubans with relatives in the United States against Cubans with no relatives living abroad. Many early exiles living in the United States today are white and have prospered. Much of Cuba's population today and many of the courageous leaders of the democratic opposition to the Cuban regime are of African or mixed-race descent; and they do not have relatives in the United States. Even with the current monetary limitations of $300 per quarter, white Cubans receive up to 250 percent more in remittances from family abroad than their Afro-Cuban compatriots. Growing income disparities may in turn become a stumbling block upon future efforts for “national reconciliation” amongst all Cubans, regardless of race, whether they remained on the island or in exile abroad.

This week, Roberto Zurbano wrote in The New York Times ("For Blacks in Cuba, the Revolution Hasn't Begun"):

Most remittances from abroad — mainly the Miami area, the nerve center of the mostly white exile community — go to white Cubans. They tend to live in more upscale houses, which can easily be converted into restaurants or bed-and-breakfasts — the most common kind of private business in Cuba. Black Cubans have less property and money, and also have to contend with pervasive racism. Not long ago it was common for hotel managers, for example, to hire only white staff members, so as not to offend the supposed sensibilities of their European clientele.

Today's reality is even more dire than Zurbano depicts.

David Wheat
From: The Americas
Volume 69, Number 2, October 2012
pp. 266-267 | 10.1353/tam.2012.0070
In lieu of an abstract, here is a brief excerpt of the content:
In 1843 multiple slave revolts rocked the island of Cuba, including major uprisings near Matanzas and Santiago. Widely attributed to a vast conspiracy uniting slaves, free people of color, and a handful of whites, the revolts and alleged plot became collectively known as La Escalera ("the ladder"); the name was derived from a torturous slave punishment used to interrogate suspected subversives (pp. 55-57). Though historians have long debated the conspiracy's existence and the extent to which the 1843 revolts were linked, all agree that colonial authorities used both as grounds for the systematic disenfranchisement of Cuba's free people of color beginning in 1844, "the year of the lash."
As Reid-Vazquez demonstrates, the following quarter-century (1844-1868) was an exceptionally harsh period for free women and men of African descent in Cuba. In the immediate aftermath of La Escalera, nearly 40 free people of color were executed, and hundreds were imprisoned or banished. Additional repressive measures threatened Cuba's broader free colored population with increased surveillance, semi-coerced emigration, and occupational discrimination. Long-standing pardo and mulatto militias were dissolved, and new immigration policies aimed to reduce the colony's reliance on free black labor. Situating these developments within a "cycle of rebellion and repression" that stretched back several decades (pp. 44-47), Reid-Vazquez argues that despite intensified oppression, Cuba's free people of color displayed a "black agency" that "would never be fully subdued" (pp. 116 and elsewhere).
Though perhaps most indebted to the pioneering work of Pedro Deschamps Chapeaux, this study also represents a conscious effort to "bridge . . . existing scholarship on Cuban race relations that focuses on the opening and closing decades of the nineteenth century" (p. 175). The author's findings in many ways echo those of historians Kimberly Hanger, Jane Landers, Ben Vinson, Matt Childs, and others who have examined social networks, geographical mobility, and racial identities among free people of color in the colonial Spanish Caribbean and Gulf of Mexico. Foregrounding the "anxieties" of creole elites and metropolitan officials, Reid-Vazquez also evokes the tenuous nature of colonial rule and mounting challenges to Cuba's slave regime, thus linking her work to scholarship on post-slave societies and racial ideologies at the dawn of the national period.
This study relies on newspapers, document collections, government papers, and materials drawn from several major archives, notably the Archivo Nacional de Cuba (Havana) and the Archivo Histórico Nacional (Madrid). The author's primary contribution is her analysis of hundreds of petitions housed in Cuba's national archive. In the mid-1840s, nearly 1,300 free people of color were either banished from Cuba, imprisoned overseas, or encouraged to emigrate (pp. 82, 203-272). From Spain and Mexico, "dozens" sent requests for permission to return (pp. 71, 85-88). Likewise, "foreign-born free people of color" facing expulsion petitioned to remain on the island (pp. 75-80), and free black undertakers, barbers, carpenters, and midwives requested exemption from racially based occupational restrictions (pp. 105, 108). During 1859 and 1860, almost 500 petitions were submitted by free people of color hoping to avoid compulsory militia service (pp. 135-140). The majority of these petitions were successful, though exiles in Spain and Mexico would not be allowed to return to Cuba until a general amnesty was proclaimed in 1857 (pp. 95-96).
Intriguingly, this study contains more than a few references to free people of color with surnames followed by African ethnonyms (Mandinga, Gangá, Lucumí, Carabalí, Congo). While Africa is largely absent from the nineteenth-century Atlantic World depicted here, and ostensible African identities are quickly subsumed within an interpretative framework that heavily emphasizes race, this reviewer wondered whether African-born former slaves were in some ways better prepared than other free black exiles to cope with "ten arduous years abroad" (p. 94). One might also speculate that free people of color who had survived the Middle Passage may have viewed the dissolution of black militias as something less than "a crushing blow to their identity and honor"
Publicado por Unknown en 10/01/2012 11:24:00 p. m. No hay comentarios: Enlaces a esta entrada