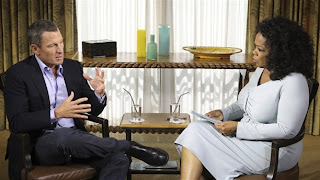 Even with apology, Armstrong's brand value 'near zero'

OPRAH ON LANCE: He Did 'Not Come Clean in The Manner' I Expected

Oprah Winfrey said Lance Armstrong, who she said confessed to her that he used performance-enhancing drugs during his string of Tour de France victories, did 'not come clean in the manner' she expected, Reuters reported.
Winfrey went on to say that she would leave it to others to decided if the former champion was contrite during the interview that was taped on Monday in Texas, but she did call him thoughtful and serious.
A group of about 10 close friends and advisers to Armstrong left a downtown Austin hotel about three hours after they arrived Monday afternoon for the taping. Among them were Armstrong attorneys Tim Herman and Sean Breen, along with Bill Stapleton, Armstrong's longtime agent, manager and business partner. All declined comment entering and exiting the session.
Soon afterward, Winfrey tweeted: "Just wrapped with (at)lancearmstrong More than 2 1/2 hours. He came READY!"
In a text to the AP on Saturday, Armstrong said: "I told her (Winfrey) to go wherever she wants and I'll answer the questions directly, honestly and candidly. That's all I can say."
Speaking on "CBS This Morning," Winfrey said she had not planned to address Armstrong's confession before the interview aired on her OWN network but, "by the time I left Austin and landed in Chicago, you all had already confirmed it."
Armstrong was stripped of all seven Tour titles last year following a voluminous U.S. Anti-Doping Agency report that portrayed him as a ruthless competitor, willing to go to any lengths to win the prestigious race.
USADA chief executive Travis Tygart labeled the doping regimen allegedly carried out by the U.S. Postal Service team that Armstrong once led, "The most sophisticated, professionalized and successful doping program that sport has ever seen."
Cycling's governing body urged Armstrong on Tuesday to testify before its independent commission on doping.
The International Cycling Union, or UCI, said it was aware of media reports that Armstrong had come clean and confessed to doping during an interview with Oprah Winfrey taped Monday.
"If these reports are true, we would strongly urge Lance Armstrong to testify to the Independent Commission established to investigate the allegations made against the UCI in the recent USADA reasoned decision on Lance Armstrong and the United States Postal Service (USPS) team," the federation said in a statement.
The UCI said it would not make any further comment until it has viewed the interview, which is to be broadcast on Thursday night.
The UCI set up an independent panel in November to investigate the Armstrong case and what role the governing body had in the scandal. The U.S. Anti-Doping Agency raised suspicions of UCI collusion with Armstrong in its damming report that led to the cyclist being stripped of his seven Tour de France titles and banned for life.
The UCI has been accused of covering up suspicious samples from Armstrong, accepting financial donations from him and helping him avoid detection in doping tests.
Armstrong is reportedly considering testifying against UCI officials.
Former UCI President Hein Verbruggen said Tuesday he wasn't ready to speak about the Armstrong case.
"I haven't seen the interview. It's all guessing," Verbruggen told the AP. "After that, we have an independent commission which I am very confident will find out the truth of these things."
The three-member independent commission is chaired by retired British judge Philip Otton. He is working alongside Australian lawyer Malcolm Holmes and Tanni Grey-Thompson, a 10-time Paralympic gold medalist in wheelchair racing who is now a lawmaker in the upper chamber of Britain's Parliament.
The three-member panel will meet in London from April 9-26, with a June 1 deadline to deliver its report.
The cycling body has said the three will have access to "all relevant documents in the control or possession of the UCI," including bank and telephone records and laboratory test results. 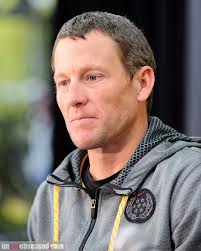 Cyclist Lance Armstrong apologized to staff on Monday at the Livestrong foundation's office in Austin, Texas, according to a publicist for the foundation.
Katherine McLane did not provide any information about what Armstrong was apologizing for.
The apology came ahead of Armstrong's scheduled interview with talk show queen Oprah Winfrey - his first since he was stripped of his seven Tour de France titles in a doping scandal.
Publicado por Unknown en 1/14/2013 03:08:00 p. m. No hay comentarios: Enlaces a esta entrada

Lance Armstrong to address alleged doping in interview with Oprah

theclicker
By Courtney Hazlett, TODAY
Oprah Winfrey has landed a sit-down, "no holds barred" interview with Lance Armstrong, her network OWN announced Tuesday. The cyclist will address the alleged doping scandal, years of accusations of cheating and charges of lying about the use of performance-enhancing drugs throughout his storied cycling career, according to the release.
An exclusive interview with the disgraced cyclist is precisely what media outlets have been clamoring for. Not only have rumors of his use of performance-enhancing drugs been rampant for years now, but in recent months he's been given a lifetime ban from the sport of cycling; was stripped of his seven Tour de France titles; stepped down as chairman from Livestrong, his cancer-research foundation; and has lost nearly all endorsements, including those from Nike and Budweiser.
Since these developments, Armstrong has said very little. In fact, the last statement he made publicly, which he linked to on his  Twitter account, was in October, in response to stepping down from Livestrong. In that statement, he did not explicitly admit to wrongdoing, but only said he was leaving Livestrong "to spare the foundation any negative effects as a result of controversy surrounding my cycling career."
Rumors that Armstrong might be considering admitting to his drug use originally surfaced during the weekend of Jan. 5.
The Winfrey interview, which will air as a 90-minute episode of "Oprah's Next Chapter," will be broadcast on OWN on Thursday, Jan. 17, at 9 p.m.
Publicado por Unknown en 1/08/2013 09:37:00 p. m. No hay comentarios: Enlaces a esta entrada

The Women in the Lance Armstrong Doping Scandal