Antunez to Join Speaker Boehner at State of the Union 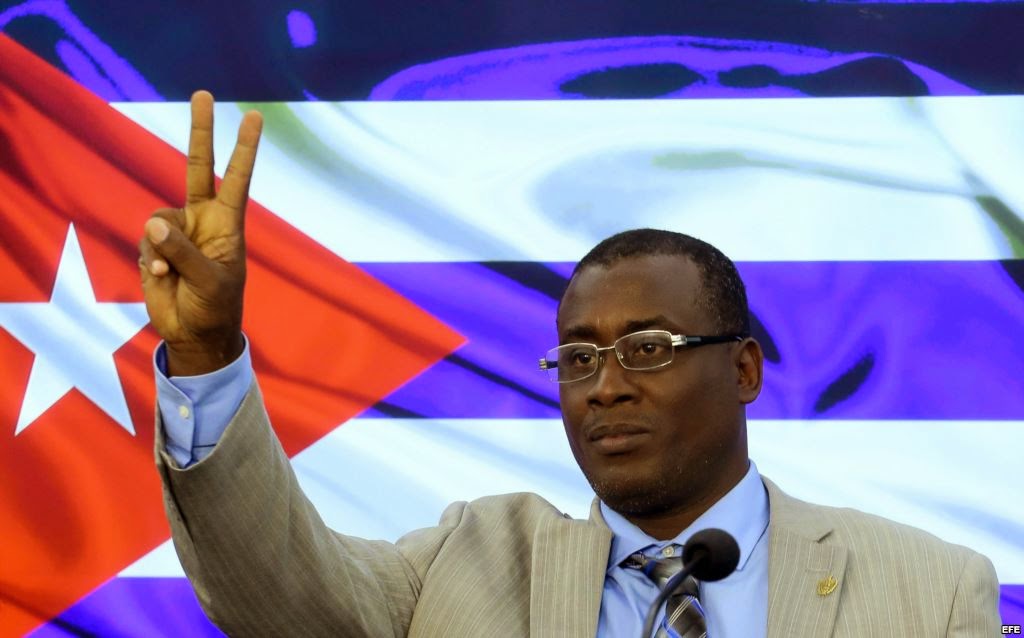 From The Washington Examiner:

House Speaker John Boehner will broadcast his opposition to President Obama’s executive action to normalize relations with Cuba to an international audience by bringing a top leader of the Cuban resistance movement to the State of the Union speech.

One of Boehner’s confirmed guests for the evening is Jorge Luis Garcia Perez, who is known as “Antunez.”

Antunez, the 43-year-old leader of Cuba’s civic resistance movement, served more than 17 years in prison, with the Castro regime releasing him in 2007 ahead of expected European sanctions. He lives in Cuba and will return there in two weeks.

He was imprisoned in 1990 after participating in a pro-democracy march. In prison, he refused to wear the uniform provided and rejected communist re-education lessons, which resulted in guards sending him to solitary confinement and adding more years to his original five-year sentence.

Already in Washington ahead of Obama’s speech, Antunez thanked Boehner for inviting him and said his presence at the speech is an “important recognition to the Cuban resistance” about the significance of their plight — especially now, just a few days after the administration eased major sanctions on the island nation for the first time in 50 years.

“He is an ambassador for the Cuban resistance — for those struggling inside Cuba,” Antunez told the Washington Examiner on Monday night through an interpreter. “He especially feels that he is here representing all of those prisoners who are not released in response to the Obama-Castro” agreement.

He also highlighted a document, the Agreement for Democracy, signed by top Cuban resistance leaders in 1998, laying out their demands from the Castro regime, including free and fair elections and the release of all political prisoners. He specifically named Ciro Alexis Casanova, Ernesto Borges Perez and Armando Sosa Fortuny as two resistance leaders who remain in prison that should be immediately released.

Antunez also had a strong message for Obama.

“He would tell President Barack Obama that the way to change Cuba is not by engaging the Castro regime — and that Cuba is not the Castro regime,” he said, making the point that “the stronger the regime becomes economically because of investment, the weaker the resistance becomes.”

He also took issue with what he regarded as Obama’s “secret negotiations” with the Castro regime, describing them as “illegitimate” because they did not involve resistance leaders or average Cubans.

“The future of Cuba should not have been agreed to in secret — as these secret negotiations between Cuba and the regime have been carried out,” he said. “No agreement that excludes the Cuban resistance and the Cuban people can be considered legitimate.”

A Cuban of African-American descent, fellow inmates nicknamed him the “black diamond” to recognize what they considered his courage and unbreakable spirit, and many Cuban’s refer to him as the island’s Nelson Mandela.

In his essay “A Word From the Opposition,” in the January 2009 issue of the Journal of Democracy, Antunez highlighted the Cuban resistance movement’s adherence to the non-violent principles set forth by Gandhi and Dr. Martin Luther King.

He is married to Iris Tamara Pérez Aguilera, president of the Rosa Parks Women’s Movement.

Prominent members of the Cuban-American community in Congress, Sen. Marco Rubio and Rep. Ileana Ros-Lehtinen, both Republicans from Florida, also have Cuban dissidents as their guests to the State of the Union.

Rubio has invited Rosa Maria Paya Acevedo as his personal guest to Obama’s annual speech to Congress on Tuesday, his office confirmed Monday.

Paya Acevedo is a Cuban Christian Liberation Movement activist whose father, Oswaldo Paya, one of Cuba’s best-known dissidents, was killed in 2012 in a car crash under suspicious circumstances.

The Paya family argues that the Castro brothers orchestrated the crash and that it had been driven off the road, while the Cuban government asserts that the driver lost control of the vehicle and hit a tree. The Cuban government has refused to allow an investigation and has withheld a copy of the autopsy report from the family.

Ros-Lehtinen, a former chairman of the House Foreign Affairs Committee, is bringing a representative of the family members whose relatives were killed by Castro regime in 1996.

In February of that year, members of the anti-Castro group Brothers to the Rescue were in a pair of Cessnas flying over international waters near the island. The Cuban Air Force shot the planes out of the sky, killing three American pilots.

Ros-Lehtinen has invited Marlene Alejandre Triana, the daughter of Armando Alejandre, a decorated Vietnam veteran and one of the pilots who died in the 1996 shoot-down.

Earlier Monday, the White House announced that Alan Gross, a subcontractor recently freed by the Cuban government after five years of imprisonment, will be one of first lady Michelle Obama’s guests at the State of the Union address, along with Gross’s wife Judy.

Gross’s release came the same day Obama announced his unilateral action to reestablish diplomatic ties to the one-party Communist island nation, which is viewed by those supporting the new relationship with Cuba as a positive outgrowth of loosening restrictions on the island nation.
Publicado por Unknown en 1/20/2015 03:50:00 p. m. No hay comentarios: Enlaces a esta entrada