Visit msnbc.com for breaking news, world news, and news about the economy

CAIRO — Anti-corruption campaigners pressed Egypt's chief prosecutor Thursday for an investigation into the assets of Hosni Mubarak and his family, handing over documents that they say spotlight the kind of potentially improper financial dealings that may have allowed the former ruler and his relatives to amass a large fortune.
The family's wealth — speculation has put it at anywhere from $1 billion to $70 billion — has come under growing scrutiny since Mubarak's Feb. 11 ouster opened the floodgates to three decades of pent-up anger at the regime.

The Takedown of Hosni Mubarak

CAIRO –  A U.S. diplomatic cable reported that the defense minister was known as "Mubarak's poodle," a derisive reference to his unswerving loyalty to the former authoritarian president. 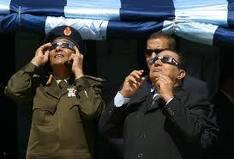 Yet huge crowds of Egyptians who demonstrated for 18 days against Hosni Mubarak's rule saw Defense Minister Hussein Tantawi and his troops as their savior. They appealed to the military to intervene in Egypt's crisis, and the generals did.
Read more: http://www.foxnews.com/world/2011/02/15/mubarak-loyalist-egypts-transition-leader/#ixzz1E4V1Bwpg
Publicado por Unknown en 2/15/2011 06:09:00 p. m. No hay comentarios: Enlaces a esta entrada

Mubarak and his family moved to Sharm al-Sheikh on Thursday night following his final speech, in which he handed over executive authority to former Vice-President Omar Suleiman, Egypt's al-Masry al-Youm reported.

Former president Hosni Mubarak
The same sources said that Mubarak was currently receiving medical treatment but that no decision had yet been made on whether to transfer the 82-year-old former head-of-state to a hospital.

Rumors had circulated earlier that Mubarak had fainted twice while recording his final speech, which was broadcast on state television on Thursday evening.

Prime Minister Ahmed Shafiq confirmed Sunday that Mubarak was in Sharm el-Sheikh and has not leave the country.

Mubarak underwent a successful surgery in March 2010 at a German clinic for an inflamed gall bladder. Since then, doubts increased over the former president's health.
Publicado por Unknown en 2/14/2011 09:45:00 p. m. No hay comentarios: Enlaces a esta entrada

Where is Egypt's Hosni Mubarak, and is he ill?

By Kathy Lally
Washington Post Staff Writer
Monday, February 14, 2011; 9:28 AM
SHARM EL-SHEIKH, EGYPT - Hosni Mubarak, whose presence was felt and feared throughout Egypt for 30 years, has fallen quickly and astonishingly out of sight, his exact whereabouts unknown.

Full story
Where is Egypt's Hosni Mubarak, and is he ill?

America's attempts to spread its ideals around the world should not be achieved by force or money, believes US Congressman Ron Paul, who says Washington's efforts to buy influence in countries like Egypt have failed and will always fail.

Where this guy come from???

We have learned through foreign sources that Hosni Mubarak was flown this morning to a Baden hospital in Germany after falling into a coma. The report was confirmed this morning by Bahrain daily Al Wasat who indicated that just prior to leaving for his resort in Sharm-el-Sheikh, Mubarak became comatose.

Apparently, prior to delivering his last speech on national Egyptian television, we also learned that Mubarak had fainted. This is the explanation given for the delay between the announcement of his anticipated speech and his actual appearance several hours later.

How The Mubarak Family Made Its Billions 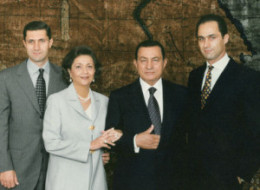 A tourist in Cairo spots three photographs on the wall of a restaurant: one of Nasser, another of Sadat, and the third of Hosni Mubarak. He asks the owner who the first man is, and the owner tells him it's the man who overthrew the Egyptian monarchy and served as the country's president. "Who's the second man?" the tourist wants to know. "That's Anwar Sadat, our next president," comes the reply. "He made peace with Israel but was assassinated in 1981." Next the tourist wants to know who the third man is. "Him?" says the restaurant owner. "That's my business partner's father" - A popular joke in Egypt


How The Mubarak Family Made Its Billions

Egypt's Mubarak: From poverty to the presidency