US Hijacker in Cuba Headed Home After 3 Decades

ABC News
By PETER ORSI Associated Press
An American fugitive hijacker said Tuesday he is going home to face justice nearly three decades after he commandeered a plane, flew to Cuba and was thrown behind bars rather than greeted as a fellow revolutionary.

William Potts [photo] said U.S. diplomats in Havana contacted him earlier in the day to report that his travel arrangements were made and he could leave on a charter flight to Miami on Wednesday morning, accompanied by American officials.
"As I understand it when I land in Miami the federal escorts will turn me over to U.S. marshals, and what happens after that I couldn't tell you," Potts told The Associated Press by phone from his home in Havana. "I hope to be arraigned soon."
A spokeswoman for the U.S. Interests Section said the diplomatic mission did not have any immediate comment on Potts' case. Cuban officials did not immediately respond to a request for comment.
Potts, now 56, was a young man in 1984 when he pulled a gun hidden in a plaster cast and hijacked a commercial flight headed from New Jersey to Florida. He ordered it to the Communist-run island, where he expected that Cuba would offer him guerrilla training.
Instead, authorities convicted him of air piracy and jailed him for more than 13 years.
On Tuesday, Potts said he seeks "closure" by facing U.S. legal authorities. He argued that the time he served in the Combinado del Este prison outside Havana should mitigate further punishment in the United States, but acknowledged there's no guarantee.
"I'm ready for whatever," Potts said. "My position is, of course, I did the crime and I did the time, and the United States has to recognize that."
U.S. authorities have aggressively prosecuted some returning fugitives, while others saw their sentences reduced significantly for time served elsewhere.
Potts said he looks forward to reuniting with family he hasn't seen in many years, but is also anxious about returning from exile.
"I've got kind of mixed emotions, let me say that at least, about touching American soil for the first time in nearly 30 years," he said. "So much has changed, and I'm just going to have to wait and see what it looks like when I get there."
For years Potts has made his livelihood as a farmer in an eastern suburb of the Cuban capital. He married a Cuban woman with whom he had two children. They have since divorced, but remain close and live together in a modest two-bedroom home in a Cold War-era apartment block. Last year their two daughters went to live with family in Atlanta.
In recent weeks Potts has been working with U.S. Interests Section officials to get a passport to travel back to the United States. Nevertheless, he said his future remains in Havana.
"I'm a permanent resident in Cuba, and just as soon as I finish taking care of this business in the United States, I certainly have every intention of returning to Cuba to live," he said. "I'm here. ... I've lived like half my life here in Cuba now, and my future interests and the things that I want to do are located here in Cuba."
Publicado por Unknown en 11/05/2013 05:39:00 p. m. No hay comentarios: Enlaces a esta entrada 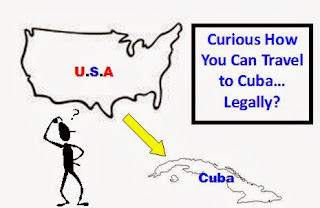 
HAVANA (Reuters) - Americans are visiting Cuba in record numbers despite strict travel restrictions, joining the hundreds of thousands of Cuban Americans who travel home each year, according to Cuban government figures published on Friday.

The numbers do not include more than 350,000 Cuban Americans estimated by travel agents and U.S. diplomats to have visited the island last year. Because Cuba considers them nationals, they are not listed in its tourism statistics.

U.S. citizens are barred from traveling to Cuba without government permission under a U.S. trade embargo imposed half a century ago that can only be lifted by Congress.

The rise in U.S. visitors partly reflects a loosening of travel restrictions by President Barack Obama's administration and allow "people-to-people" contact aimed at speeding political change on the communist-ruled island 90 miles from Florida.

As well as allowing Cuban Americans to travel to Cuba freely, Obama authorized licenses for "purposeful" travel to more than 250 Cuba travel agents and allowed more airports to provide charter service between the two countries.

The program, which began in 2011 and requires annual renewal of permission to bring groups to Cuba, allows for educational and cultural travel. The regulations require detailed itineraries of each traveling group.

Cuba hosted 2.8 million tourists in 2012, with arrivals down 2 percent so far this year.

"Cuba has so much to offer in terms of culture, history and issues of mutual concern - healthcare, education and the environment - and students, professionals, people of faith are curious," said Collin Laverty, head of travel provider Cuba Educational Travel.

In the years following Cuba's 1959 revolution when Fidel Castro took power, the highest known number of U.S. visitors peaked at 70,000 under President Bill Clinton, but dropped to an average of 30,000 in the last term of President George W. Bush.

Travel to Cuba is seen as a key political issue by both embargo supporters and opponents in Washington.

"This is not about promoting democracy and freedom in Cuba. This is nothing more than tourism ... a source of millions of dollars in the hands of the Castro government that they use to oppress the Cuban people," Republican Senator Marco Rubio of Florida told a congressional hearing soon after Obama instituted the policy.

Theodore Piccone, deputy director of foreign policy at the Washington-based Brookings Institute that advocates engagement, said Obama should do more to open travel to Cuba. He said it was ironic that Cubans, due to reforms on the island, were now free to travel where they pleased while U.S. citizens were not.

"American travel to Cuba will remain a small fraction of its potential as long as President Obama avoids a further liberalization of travel," he said. "If the Cuban government can open travel of its citizens, which it now has, why can't we?"

By David Martosko, The Daily Caller

Less than a week after a New Orleans suburbanite petitioned the White House to allow Louisiana to secede from the United States, petitions from seven states have collected enough signatures to trigger a promised review from the Obama administration.
By 6:00 a.m. EST Wednesday, more than 675,000 digital signatures appeared on 69 separate secession petitions covering all 50 states, according to a Daily Caller analysis of requests lodged with the White House’s “We the People” online petition system.
A petition from Vermont, where talk of secession is a regular feature of political life, was the final entry.
Petitions from Alabama, Florida, Georgia, Louisiana, North Carolina, Tennessee and Texas residents have accrued at least 25,000 signatures, the number the Obama administration says it will reward with a staff review of online proposals.
The Texas petition leads all others by a wide margin. Shortly before 9:00 a.m. EST Wednesday, it had attracted 94,700 signatures. But a spokesperson for Gov. Rick Perry said Tuesday afternoon that he does not support the idea of his state striking out on its own.
“Gov. Perry believes in the greatness of our Union and nothing should be done to change it. But he also shares the frustrations many Americans have with our federal government,” according to a statement from the governor’s office.
A backlash Monday night saw requests filed with the White House to strip citizenship rights from Americans who signed petitions to help states secede.
And in a similar nose-thumbing aimed at Texas’ conservative majority, progressives from the liberal state capital of Austin responded Monday with a petition to secede from their state if Texas as a whole should decide to leave the Union.
Late Tuesday a second group of Texans, this one from Houston, lodged their own White House petition. Secession-minded Texans, they wrote, “are mentally deficient and [we] do not want them representing us. We would like more education in our state to eradicate their disease.”
Houstonian “Kimberly F” — The White House does not provide last names — submitted the petition. She told TheDC in an email that ”[w]e need both sides presented, or we all look like a bunch of fools.”

Former Hawaii elections clerk Tim Adams has now signed an affidavit swearing he was told by his supervisors in Hawaii that no long-form, hospital-generated birth certificate existed for Barack Obama Jr. in Hawaii and that neither Queens Medical Center nor Kapi’olani Medical Center in Honolulu had any record of Obama having been born in their medical facilities.

When Julia went to Cuba with a Humanitarian aid After completely miscalculating how much cash she would need for a short visit to Havana, where credit cards and ATMs aren't an option, Julia Stiles ran out of money, the actress writes in this week's Wall Street Journal. Unable to pay for her hotel or a cab to the airport, she found herself having to rely on her skills for survival. But wait: What are her skills? "I thought about reciting monologues in the Plaza Vieja for spare change," she writes. Dismissing this idea (which is too bad, because if you ask us this would kill in Fidel Castro's Republic), she instead opted to sneak into a student residence hall equipped with a computer, with the aim of e-mailing friends to somehow wire her money. But as it turns out, her stardom was more of a hindrance than a help.


Before I was able to address my cash situation, an email from friends back in the States sidetracked me, congratulating me on a Golden Globe nomination. There I was, thrilled to have received such a professional honor, yet still unable to barter it for cab fare.

Foiled! In the end, Julia got home safely, after Carlos, the host of her B&B, drove her to the airport in his ancient stick shift. For Julia, this kindness imparted an important life lesson: "That the people you know, and the ways in which you rely on one another, are more valuable than any paper currency." For his part, Carlos was probably just relieved not to have another mouth to feed.
Julia Stiles on Being Stranded in Havana [WSJ]