Video Manny Pacquiao Gets Knocked Out By One Punch 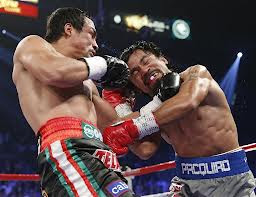 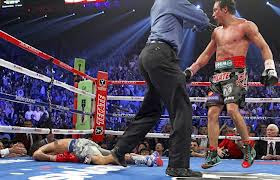 Ryan MaquiñanaCSNBayArea.com
LAS VEGAS – At long last, Juan Manuel Marquez got the better of Manny Pacquiao, and he did it in ruthless fashion via sixth-round knockout in front of a sellout crowd at the MGM Grand Garden Arena.

In a brutal welterweight war of attrition, a counter right hand from Marquez (55-6-1, 40 KOs) sent Pacquiao (54-5-2, 38 KOs), into the canvas face-first and emphatically put an exclamation point on their fourth fight after failing three times to edge the Filipino in the past.  The official time was 2:59.

“We knew he was going to come out aggressive,” Marquez said.  “We knew we had to capitalize on that.  The last three rounds, I thought Pacquiao was coming to knock me out, and I knew I could knock him down.  I landed the perfect punch.”

Pacquiao, 147, had outworked Marquez, 143, in the first two rounds, but the Mexican responded in the third with a massive overhand right that sent Pacquiao careening to the canvas.  Though Pacquiao recovered, Marquez had seemed to gain the momentum.

Of course, the perpetual ebb and flow between the two combatants would continue in the fifth round, as Pacquiao decked Marquez with a straight left hand as they exchanged.  Marquez would rise to his feet, and although Pacquiao would subsequently take a lead in the sixth, the end would come swiftly and viciously.

Moments before the bell, Pacquiao flicked his right jab out and Marquez snuck a straight right hand through the guard that would put the Filipino down for good, as the arena was inundated with jubilant roars and desperate cries depending on the fans’ respective contingents.

Referee Kenny Bayless signaled for the fight to end as it was apparent Pacquiao would be unable to beat the count.  Pacquiao remained on the canvas for about a minute but eventually came to his senses and was healthy enough to do a postfight interview.

“I got hit by a punch I didn’t see,” said Pacquiao, who had no plans to retire.

Judges Adalaide Byrd, Steve Weisfeld, and John Keane all had Pacquiao ahead 47-46 at the time of the stoppage.  Pacquiao’s trainer, Freddie Roach, reflected on his charge’s first knockout loss since 1999, when the Filipino was a 112-pound flyweight.

“Manny came back and was in charge,” Roach said.  “He just got a little too careless and he was hurting Marquez.”

Heading into the bout, whispers surfaced regarding Pacquiao’s flagging commitment to boxing.  Between his political ambitions as a congressman to arriving in his Hollywood training camp two weeks late, the Filipino’s extracurricular pursuits were magnified considering his last two outings were subpar by his standards.

Many ringside observers scored Pacquiao’s third fight with Marquez in November 2011 in favor of his Mexican foe.  Then six months ago, the “Pac-Man” lost a highly disputed split decision to Timothy Bradley that left the boxing world wondering if Pacquiao’s prime had expired.

Marquez solidified those qualms into stone as he not only defeated his longtime tormentor, he entered himself into the discussion of greatest Mexican fighter ever alongside the legendary Julio Cesar Chavez.

At Friday’s weigh-in, the 39-year-old unveiled a chiseled physique, crediting his new appearance to strength and conditioning coach Angel Hernandez.  After a draw and two consecutive decision losses to Pacquiao over the past eight years, the new-look Marquez has rejuvenated his career and opened the door to further pay-per-view possibilities.

Bob Arum of Top Rank, who promotes both fighters, has stated that former lightweight titleholder Brandon Rios would be in the mix to fight the winner next in the spring of 2013.  However, following a likely Fight of the Year candidate, a fifth encounter between Pacquiao and Marquez might be in the cards.

“Fifth fight?  Why not?” promoter Bob Arum asked aloud.  “Have you seen a more exciting fight in years?”
COMPUBOX STATISTICS