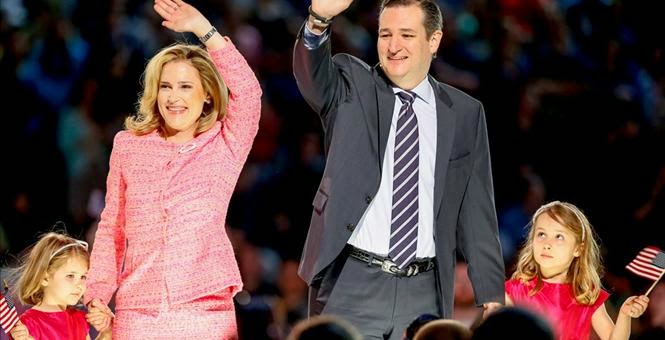 As if Ted Cruz didn’t already have enough against him media-wise (i.e. he’s a principled, brilliant and credentialed conservative both fiscally-- and even more odiously--socially)–on top of these offenses, he’s also half Cuban.
Forget the liberal love chants to “ethnic diversity.” The Cuban ethnic brand has long flapped like a matador’s cape in front of the Democrat-Media complex. Granted, some of those insufferable Cubans love to flap it.
Ted Cruz-Derangement-Syndrome went viral in the media this week. From Chris Matthews to David Muir and from Joe Scarborough to David Brooks-- they were all over Cruz like a cheap suit. The New Yorker’s John Cassidy called Cruz “uppity”—then weaseled out because the term has “disturbing historical connotations.”
A berserk Donny Deutsch over at MSNBC denounced Cruz as not only “unelectable,” but “scary, I think he’s dangerous, I think he’s slimy and I think he brings no fresh ideas.”
It’s an old story, actually. A few years ago during an interview with Joy Behar, MSNBC’s Donny Deutsch sneered at Cuban-American Marco Rubio as that “coconut down in Florida.”
In settings like MSNBC (but usually backstage) the term coconut (brown on the outside white on the inside) is generally used to castigate “Hispanics” who ignore marching orders barked by Democratic/Media drill sergeants–same as “Oreo” for similarly uppity blacks.
Never mind that the Cuban-American Marco Rubio (like Ted Cruz) is probably more purely Caucasian than Elvis Presley, Hank Williams, Oral Roberts, Johnny Depp among many other southerners who boast Choctaw/Cherokee heritage. Never mind this because the issue here is the liberal media’s hypocrisy—not their stupidity.
Here’s Norman Birnbaum, a current columnist for The Nation, The Daily Beast among other liberal publications, going off on Cuban Americans a few years ago: “Despite the truly repellent Miami Cubans of the older generation and their gallant allies, the Israel lobby, Castro hangs on.”
Birnbaum is also a Georgetown Professor Emeritus and former advisor to three Democratic Presidential candidates. Now imagine a Republican political adviser and—say--Hillsdale college professor/author spouting, on the record on for public consumption, any of the following phrases: "those truly repellent New York Jews" or "those truly repellent Ferguson Negroes" or "those truly repellent Los Angeles Mexicans," or “those truly repellent Detroit Arabs.”
Would he even bother seeking future media employment?
Years ago Joe Sobran –as usual—nailed it by writing that “refugees from communism embarrass liberals.” Bulls-eye!
These refugees are living, breathing, walking, talking refutations of the horrors of extra-strength leftism. This makes leftists of all stripes very uncomfortable. These living, breathing testimonials against their product must be silenced, booted home (Elian Gonzalez) scorned (MSNBC) or-- at the very least—ignored (try finding my books mentioned by the non-Fox Media.)
Whoops! Excuse me, I exaggerate. In fact, these books have been mentioned --shamelessly plugged in fact, but in places such as Warsaw by the Polska Times ( a division of the London Times,) Madrid by former Spanish First Lady Ana Botella, in Sao Paolo by Brazil’s hugely popular Veja. Nothing by the Beltway biggies in my home country however.
Deep down liberals feel that Cuban-Americans had it coming. Only a tiny and filthy-rich clique of mobsters, pimps, crooks, robber barons, slave-drivers, plantation-owners, and sweat-shop owners–all direct descendants of the Spanish conquistadores—prospered in pre-Castro Cuba. They prospered by slave driving, sweatshopping and pimping the island’s indigenous people. Thus goes thefable.
Consequently, people like Ted Cruz’ and Humberto Fontova’s fathers “had it ‘comin—and revenge is sweet!”
Publicado por Unknown en 3/30/2015 09:08:00 p. m. No hay comentarios:

Is Ted Cruz Allowed To Run Since He Was Born In Canada?: It's All Politics

NPR/ Domenico Montanaro
There will be a question from some about Texas Sen. Ted Cruz's eligibility to run for president.
That's because even though Cruz grew up in Texas, he was born in Canada. (He renounced his Canadian citizenship in 2013.)
Democrats are sure to remind voters of Cruz's Canadian birth since some on the right have questioned where President Obama was born. The president is a native of Hawaii.
Sen. Ted Cruz says because his mother was born in the United States that makes him a "natural born citizen" and eligible to run for president.

The U.S. Constitution says presidential candidates have to be "natural-born citizens." But the Supreme Court has never weighed in with a definition, leaving it open to interpretation.
It's a question that has come up before. In 2008, senators passed a resolution, making it clear, for example, that John McCain was allowed to run given that he was born on a U.S. military base in the Panama Canal Zone. Barack Obama and Hillary Clinton, both senators then, voted for it.
Barry Goldwater, the 1964 GOP nominee, was born in Arizona when it was a territory – not a state. And some questioned George Romney's eligibility to run in 1968, because he was born in Mexico. Romney's parents were U.S. residents.
Cruz's parents worked in the oil industry in Calgary, Canada, when he was born. His mother was born in the United States. His father was born in Cuba, but later became a U.S. resident. Cruz argues that because his mother was born in Delaware, he is, in fact, a "natural-born citizen."

Article II, Section 1 of the U.S. Constitution states, "No Person except a natural born Citizen...shall be eligible to the Office of President."

U.S. Constitution
And most legal scholars agree. In fact, two of the best-known Supreme Court lawyers – who are not normally on the same side – make the case that Cruz – as well as McCain, George Romney and Goldwater – is eligible to run.
Neal Katyal, who served as acting solicitor general in the Obama administration, and Paul Clement, who was solicitor general under George W. Bush, wrote earlier this month in the Harvard Law Review that "there is no question" Cruz is eligible.
They cite that because Cruz's mother was a U.S. citizen and his father was a U.S. resident, "Cruz has been a citizen from birth and is thus a 'natural born Citizen' within the meaning of the Constitution" and the "Naturalization Act of 1790."
They also point to British common law and enactments by the First Congress, both of which have been cited by the Supreme Court.

Both confirm that the original meaning of the phrase "natural born Citizen" includes persons born abroad who are citizens from birth based on the citizenship of a parent. As to the British practice, laws in force in the 1700s recognized that children born outside of the British Empire to subjects of the Crown were subjects themselves and explicitly used "natural born" to encompass such children. These statutes provided that children born abroad to subjects of the British Empire were "natural-born Subjects . . . to all Intents, Constructions, and Purposes whatsoever."
The Framers, of course, would have been intimately familiar with these statutes and the way they used terms like "natural born," since the statutes were binding law in the colonies before the Revolutionary War. They were also well documented in Blackstone's Commentaries, a text widely circulated and read by the Framers and routinely invoked in interpreting the Constitution.
No doubt informed by this longstanding tradition, just three years after the drafting of the Constitution, the First Congress established that children born abroad to U.S. citizens were U.S. citizens at birth, and explicitly recognized that such children were "natural born Citizens." The Naturalization Act of 1790 provided that "the children of citizens of the United States, that may be born beyond sea, or out of the limits of the United States, shall be considered as natural born citizens: Provided, That the right of citizenship shall not descend to persons whose fathers have never been resident in the United States ... ."
The actions and understandings of the First Congress are particularly persuasive because so many of the Framers of the Constitution were also members of the First Congress. That is particularly true in this instance, as eight of the eleven members of the committee that proposed the natural born eligibility requirement to the Convention served in the First Congress and none objected to a definition of "natural born Citizen" that included persons born abroad to citizen parents.

Katyal and Clement conclude, "There are plenty of serious issues to debate in the upcoming presidential election cycle. The less time spent dealing with specious objections to candidate eligibility, the better. Fortunately, the Constitution is refreshingly clear on these eligibility issues."
Publicado por Unknown en 3/23/2015 02:27:00 p. m. No hay comentarios:

NBC News.com
Texas Sen. Ted Cruz will announce his presidential bid on Monday during an address at Liberty University in Virginia, NBC News confirms.
Cruz, a conservative Republican famed for his staunch opposition to the president's signature health care law and his executive actions on immigration, will become the first GOP hopeful to formally announce a White House run.
A person with knowledge of the announcement tells NBC that the senator will announce the bid during a convocation ceremony at Liberty, a Christian university in Lynchburg, Virginia.
A favorite of Tea Party activists, Cruz is known for his filibuster-like speech to protest the Affordable Care Act as a government shutdown loomed in 2013.
First elected to the Senate in 2012, Cruz previously served as the the solicitor general of Texas.
In a March NBC News/ Wall Street Journal poll, 40 percent of GOP primary voters said they could see themselves supporting Cruz for president, while 38 percent said they could not see themselves backing him.
The news of Cruz's run was first reported by the Houston Chronicle late Saturday night.
Publicado por Unknown en 3/22/2015 04:21:00 p. m. No hay comentarios: