The New Yorker
By James Surowiecki

In 1958, Laurance Rockefeller threw an inaugural party for Dorado Beach, his luxury resort on the northern coast of Puerto Rico. The guests included millionaires, politicians, and movie stars. In the years that followed, Dorado became the most glamorous resort in the Caribbean, attracting everyone from Ava Gardner to John F. Kennedy. But, as time passed, resorts on other islands lured high-end travellers away, and Dorado eventually became a charming relic. In 2006, it closed. History had passed it by.
Puerto Ricans could have been forgiven for thinking the same was true of the island generally. It had been one of the great postwar economic-development success stories, turning itself from a poor, largely rural society into a manufacturing powerhouse with a thriving middle class. But by the nineteen-nineties the economy had slowed, and then it went off the rails. Puerto Rico has been in and out of recession since 2006. Its unemployment rate is around fourteen per cent; forty-five per cent of the population lives below the federal poverty line; and there’s a fiscal crisis—a scramble to restructure debts of seventy-three billion dollars. Last year, the new governor, Alejandro Padilla, said, “We’ve proved that Puerto Rico is not Detroit and not Greece.” As boasts go, that’s hardly encouraging.
Puerto Rico’s difficulties are rooted, in part, in its earlier success. Its path to industrialization was paved with corporate tax breaks. The most important one was Section 936 of the U.S. tax code. (Puerto Rico is a U.S. territory.) This went into effect in 1976, and exempted the profits earned by American companies from federal taxes. Mauro Guillén, a management professor at Wharton and an expert in emerging markets, told me, “Puerto Rico became, by a wide margin, the most attractive locale in the world for American companies to operate in.” Between 1970 and 1980, manufacturing’s share of the G.N.P. nearly doubled, as firms, especially pharmaceutical companies, opened plants across the island. (I lived there for four years starting in the late seventies, when my dad ran a plant for Loctite.) At one point, Guillén says, more than half the drugs sold in the U.S. were manufactured in Puerto Rico.
The problem was that the growth depended on that crucial tax break, and in 1996 Congress began phasing it out. It expired completely a decade later, and, as the subsidies disappeared, so did many factories, relocating to places where labor was cheaper and regulation lighter. Between 1996 and 2014, the number of manufacturing jobs on the island fell by almost half. Last year, the island’s Secretary of Economic Development, Alberto Bacó Bagué, said that, once the island’s tax exemption expired, “we kind of disappeared from the map.”
This has left Puerto Rico scrambling to come up with a new economic strategy, and there are plans for the island to “reinvent” itself—plans replete with buzzwords of the moment, such as “cloud computing,” “the app economy,” and “innovative entrepreneurship.” There’s nothing wrong with any of these ideas—entrepreneurship is great. But what’s missing is a focus on a simple question: what can Puerto Rico offer that other locations can’t? As Guillén puts it, in a world where capital hopscotches freely from place to place, “countries need to capitalize on their distinctive advantages.”
As it happens, Puerto Rico has plenty of those: political stability, participation in the U.S. legal and economic systems, an educated and skilled workforce. But it needs to do a better job of exploiting and advertising those advantages. Heidie Calero, a consultant based in Puerto Rico, told me, “One of our main problems is that not many people in the U.S. or the world know that Puerto Rico exists under the U.S. flag and with the U.S. dollar as its currency.”
More important, Puerto Rico should pluck its low-hanging fruit. Take tourism. Puerto Rico has glorious beaches, tremendous weather, and wonderfully varied topography. Americans can get there easily and without a passport. English is spoken almost everywhere. It should be a tourist mecca. Yet policymakers neglected tourism for decades, while other Caribbean countries aggressively wooed hotel chains and bolstered infrastructure. (In the past forty years, the number of hotel rooms in the Dominican Republic went from three thousand to more than seventy thousand, while the number of hotel rooms in Puerto Rico rose by just seven thousand.) As a result, Puerto Rico has been eclipsed. In 1980, according to a study by Calero’s company, it accounted for more than a quarter of all the tourist revenue in the Caribbean. By 2012, that number was down to fifteen per cent. And tourism accounted for less than five per cent of Puerto Rico’s G.D.P.
Tourism isn’t a panacea. And it’s not as buzzy or cool as the app economy. But if you want to reinvent the Puerto Rican economy it’s a good place to start. This won’t be an easy task: when you neglect an industry for years, it erodes the skill and knowledge base of workers and managers alike. But Puerto Rico is increasing its marketing push and improving its infrastructure. The main airport is in the middle of a huge makeover, and there’s been a mini-boom in luxury hotels. Dorado Beach is once again the site of an opulent resort, an ultra-luxury Ritz-Carlton property that cost more than three hundred million dollars to build. Puerto Rico seems to be reappearing on the map. The question is whether this time it can stay there.
Publicado por Unknown en 4/02/2015 12:16:00 p. m. No hay comentarios: Enlaces a esta entrada 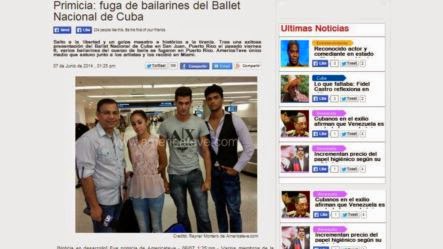 eluniversal
Venezuelan President Nicolás Maduro is to propose the inclusion of Puerto Rico in the Community of Latin American and Caribbean States (Celac) in the next meeting to be held in Havana.

"Free Puerto Rico will be independent," he exclaimed.

Maduro said that during the Celac meeting, the Fourteenth Cuba-Venezuela Joint Commission would be reaffirmed to materialize new cooperation projects in the areas of economy, energy and health.

The president gave the news during a celebration in Caracas for the 55th anniversary of the Cuban revolution. He noted that Cuba-Venezuela friendship has been strengthened since the advent of Chávezism.

"Cuba and Venezuela are united by love to Martí, Bolívar, Fidel, Chávez," he underscored.

The Head of State was joined, among others, by Cuban Ambassador to Venezuela Rogelio Polanco.
Publicado por Unknown en 1/09/2014 11:21:00 a. m. No hay comentarios: Enlaces a esta entrada