A Three-Mile-Long Asteroid Buzzes the Earth

When a reversal does eventually happen, we have a good idea of what it will and won't do — both to us and the planet …The idea that Earth's magnetic field will flip — switching the north and south magnetic poles — isn't anything new. It's even been the topic of choice for some doomsday prophets, since it will, apparently, destroy the planet or at the very least turn it on its side, putting an end to us in either case.
It's well known that the polarity of Earth's magnetic field changes. Geologists have seen this change by examining the floor of the Atlantic Ocean. When magma wells up at the Mid-Atlantic Ridge and is cooled by the ocean water, crystals in the magma will orient themselves in the direction of the Earth's magnetic field. Thus, bands of cooled magma along the ocean floor are a geologic record of what direction the magnetic field pointed in during Earth's history, and show that the magnetic field has reversed every 100,000 to 50 million years or so.
Within the last 5 million years, the reversals have been characterized by long periods of stability, of between 450,000 and 590,000 years, separated by several shorter-term reversals. The last reversal happened around 780,000 years ago, so by reckoning of some, we are long overdue.
Reversals are thought to occur when large areas of the Earth's liquid iron outer core become oppositely-aligned to their surroundings. If enough areas of the outer core do this, the entire magnetic field will flip. This does not happen suddenly, though. It takes thousands to tens of thousands of years for this to occur.
When a reversal does eventually happen, we have a good idea of what it will and won't do — both to us and the planet.
Speculation by some is that when the magnetic field flips, it will be because the solid iron inner core of the planet flips 180 degrees. This will cause the surface of the planet to shift at least 90 degrees, effectively switching our lines of latitude and longitude, and destroying us in the process. However, only the size of the inner core affects the magnetic field, with a growing core making a stronger field and a shrinking core making a weaker field, and a shift in the magnetic field will not effect the orientation of the solid core at all. Even if it did, it would take tens of millions of years for such a change to spread out from the core, through the liquid outer core, and through the mantle, before it reached the Earth's surface and did us in.
What it will do is cause a weak period in the magnetic field strength for a thousand or more years, as the various parts of the liquid outer core sort themselves out to all orient in the same direction. This would expose us to heightened amounts of solar radiation, and solar particles could even punch large, although temporary, holes in the ozone layer. Our technology would bear the greatest brunt of this kind of event, though. Even now, solar storms and coronal mass ejections can cause havoc with computers, communications systems and power grids, and this would be much worse with a weakened magnetic field. Additionally, there would be several magnetic poles during this time, making travel by compass much more difficult. What's certain is that it wouldn't be the end of us, but it would be the end of our current way of life.
There have been some signs that the magnetic field may be on the move, since within the last century, Earth's magnetic field has shifted and has lost some of its strength.
"Magnetic north has migrated more than 1,500 kilometres over the past century," said Conall Mac Niocaill, a geology and geophysics professor at Oxford University. "In the past 150 years, the strength of the magnetic field has lessened by 10 percent, which could indicate a reversal is on the cards."
Or it may not. The field changes, both in direction and strength, are well within the normal range that we've seen over the past million years or so. Also, just because something has happened in the past is no guarantee that it will happen in the future.
On the other hand, a large area underneath South America and the South Atlantic — called the South Atlantic Anomaly — was identified in the 1990s as a weak spot in the Earth's magnetic field, and could indicate a large area of the liquid core changing its polarity. It seems to be the only large area of weakness, though, so who knows if it is simply a temporary phenomenon, or a sign of things to come.
The European Space Agency is launching its 'Swarm' magnetic field mission next month. With two satellites in polar orbit to examine the magnetic field directly, and one satellite in far orbit to examine the effects of solar activity on the field, the mission could bring us much closer to understanding the Earth's magnetic field and gain more insight on how it is changing.
Publicado por Unknown en 10/05/2012 12:03:00 p. m. No hay comentarios: Enlaces a esta entrada

WASHINGTON – If the world makes it through the end of the Mayan calendar this year, a pattern of recent economic disasters based on the Hebrew calendar portends what some suspect we will be the biggest U.S. financial calamity yet Sept. 13, 2015. The No. 1 bestselling Christian book in America, “The Harbinger” by Jonathan Cahn, points out that the Americans two greatest financial shakings, occurred on successive Hebrew Shmitah years following the 9/11 Islamist terror attacks on the U.S., the key to the series of limited judgments the author sees as a result of America’s turning away from God just as ancient Israel did before the dispersion.
While Cahn prefers not to speculate on what, if anything, might befall America on Sept. 13, 2015, it will be the next Shmitah year – which occurs on Elul 29 every seven years on the Hebrew calendar. It is a time when debts are to be forgiven and the land, in the agricultural communities of ancient Israel were to be given a rest.
Sept. 17, 2001, was the beginning of the economic calamity associated with 9/11 when, two days earlier, Lehman Brothers, one of the nation’s largest financial firms, collapsed. Sept. 17, 2001, was Elul 29 on the Hebrew calendar. Likewise, Sept. 29, 2008, marked the next big crash. Sept. 29, 2008, fell on Elul 29.
All of this is laid out in a new documentary video called “The Isaiah 9:10 Judgment,” the leading faith video in the nation and one of the top-selling documentaries of any kind, produced by Joseph Farah and WND Films.
Farah believes the date Sept. 13, 2015 bears close watching – though he is quick to admit he has no idea what, if anything, will happen in America. “A clear pattern has been established,” he says. “I don’t believe it’s a coincidence what happened in America on Elul 29 in 2001 and 2008. It would be foolish to ignore the possibility that a greater judgment might be in the works – especially if America continues to move away from God and His Word.”
It’s also worth noting that Elul 29, 2015, represents the eve of the Feast of Trumpets or Rosh Hashana at sundown. An unusual astronomical phenomenon, a blood red moon – or tetrad – is expected to occur that evening, according to NASA. The Feast of Trumpets begins a period known by Jews as “the days of awe” that lasts through Yom Kippur a week later.
Hebrew roots pastor Mark Biltz of El Shaddai Ministries in Washington state noted several years ago that a cluster of tetrads will occur in 2014 and 2015 – all of them on Hebrew high holidays. There won’t be any more for the rest of the 21st century.
Joel 3:31 says: “The sun shall be turned into darkness, and the moon into blood, before the great and terrible day of the LORD come.” Other biblical references can be found in Acts 2:20 and Revelation 6:12.
Whether or not anything significant occurs of a prophetic nature Sept. 13, 2015, Farah said he is immensely pleased with the documentary treatment of the message found in the best-selling book “The Harbinger” by Jonathan Cahn, which has remained on the New York Times bestsellers list for all of 2012. 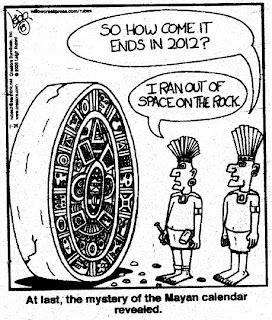 PALENQUE, Mexico (Yahoo-news) - If you are worried the world will end next year based on the Mayan calendar, relax: the end of time is still far off.
So say Mayan experts who want to dispel any belief that the ancient Mayans predicted a world apocalypse next year.
The Mayan calendar marks the end of a 5,126 year old cycle around December 21, 2012, which should bring the return of Bolon Yokte, a Mayan god associated with war and creation.
Author Jose Arguelles called the date "the ending of time as we know it" in a 1987 book that spawned an army of Mayan theorists, whose speculations on a cataclysmic end abound online. But specialists meeting at this ancient Mayan city in southern Mexico say it merely marks the termination of one period of creation and the beginning of another.
"We have to be clear about this. There is no prophecy for 2012," said Erik Velasquez, an etchings specialist at the the National Autonomous University of Mexico (UNAM). "It's a marketing fallacy."
The National Institute of Anthropological History in Mexico has been trying to quell the barrage of forecasters predicting the apocalypse. "The West's messianic thinking has distorted the world view of ancient civilizations like the Mayans," the institute said in a statement. More >>
Publicado por Unknown en 12/11/2011 11:05:00 a. m. No hay comentarios: Enlaces a esta entrada

Uploaded by RussiaToday on Jul 31, 2011
Some scientists believe bursts of solar activity cause natural disasters on our planet, but until now the star has been too difficult to reach or explore in any detail. Some Russian researchers think they have the solution. ­Volcanic eruptions, earthquakes, tsunamis -- apocalyptic pictures are becoming an ordinary part of news bulletins across the globe. And scientists are not giving out reassuring forecasts. "Unfortunately, we're expecting more severe cataclysms which may lead to large-scale human losses and destruction," says Baku-based Professor Elchin Kakhalilov of the Global Network for the Forecasting of Earthquakes. "I'm talking about even a possible shift of the centers of our entire civilization." The change in the Earth's seismic activity coincides with the rise of activity on the sun. Scientists have been witnessing gigantic bursts of plasma on its surface and say they are affecting our planet, even though it is over 90 million miles away. 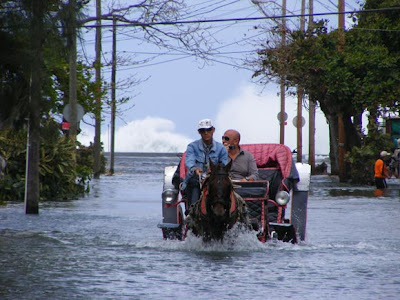 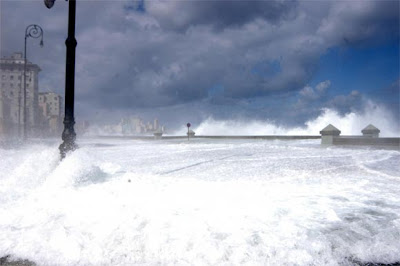