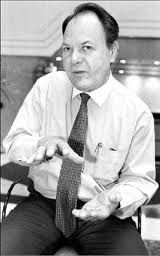 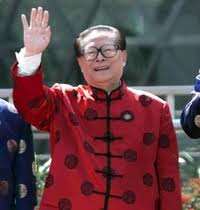 Pedro Alvarez, former head of the Cuban state food Company 'Alimport' puts on a cowboy hat during the signing of a cattle shipping agreement in Havana, Cuba, Nov. 1, 2004. (AP)
The disappearance of a top Cuban government trade official with strong ties to influential American lawmakers has elevated speculation of possible corruption and defection to the United States, even as the U.S. government says it has no idea the whereabouts of Pedro Alvarez.
Alvarez, 67, headed Cuba's food importing agency Alimport until 2009. After Congress passed a law in 2000 easing the 50-year-old trade embargo against the island to allow the U.S. cash sales of agricultural products to Cuba for humanitarian reasons, Alvarez was responsible for overseeing hundreds of millions of dollars worth of purchases.
That made Alvarez a powerful liaison between U.S. lawmakers and businesses, and the Cuban government.
"This fellow has many important and interesting things to say since he was the point man when American companies went to Cuba," said Frank Calzon, executive director of the Center for a Free Cuba.
Alvarez was relieved of his duties in 2009, just as the program took a nosedive in sales and receipts. He quickly bounced back, securing a job leading the Cuban Chamber of Commerce, but that didn't last long, having reportedly been fired last year for alleged corruption.
People make their way in front of the Capitol building early in the morning on a street in Havana, Cuba, Friday, Jan. 14, 2011. (AP)


Though few details have been revealed about the accusations against him, Alvarez was repeatedly detained by Cuban officials for questioning -- most recently in November at the same time his wife and 68 others were killed in a plane crash. He allegedly fled the island late last month.
Calzon, who said he does not know Alvarez, said he wouldn't be surprised if Alvarez was engaged in corruption.
"If they were going to detain Cuban government officials for corruption, they would have to find a very huge jail because corruption is something that happens at all levels," he said."In order to survive in Cuba, everyone has to break the law."
Cuban officials claim he has defected to the United States. Calzon says he's been informed that Alvarez is in the country and is speaking to U.S. officials although he wouldn't reveal his source. But an official with the State Department told FoxNews.com that it has no information on Alvarez's whereabouts or status.
John Kavulich, a senior policy analyst at the U.S.-Cuba Trade and Economic Council, told FoxNews.com that he has known Alvarez since 1997 and believes Alvarez is in the United States though he said he has not had any contact with him.
"Nor do I expect to," he said.
But Kavulich said Alvarez could embarrass several officials, including U.S. lawmakers, if he reveals the lengths that some of them went to win more business on the Caribbean island.
"He could, if he felt like it, and he believed it, he could make some politicians look like buffoons -- the U.S. lawmakers who went down there and was salivating all over them," Kavulich said.
But some U.S. lawmakers who have met Alvarez during visits to Cuba rejected the notion that Alvarez has any dirt on them.
"That's ridiculous," said Rep. Jo Ann Emerson, R-Mo., who told FoxNews.com that she met with Alvarez each of the three times she traveled to Cuba with congressional delegations.
Emerson said that no sensitive or specific information was exchanged during meetings between Alvarez and U.S. lawmakers. Members of the delegation simply made clear that they had a good product in the United States to offer, she said.
Emerson said she was "shocked" to learn about his disappearance.
"He was always gracious and warm to us and to the group that was there," she said, adding that he worked with U.S. agricultural groups even more. "And so he had a lot of conversations and meetings with people from around the United States who were trying to sell to Cuba."
Rep. Jeff Flake, R-Ariz, who met Alvarez when he led a bipartisan congressional delegation to Cuba in 2006, said neither he nor any of his fellow lawmakers have concerns about what Alvarez knows about them.
"I don't know what information he would have that would be sensitive for U.S. officials," he told FoxNews.com. "The trips I've taken, everyone was up-front -- they wanted more exports to Cuba."
At its peak in 2008, the U.S. exported more than $700 million in U.S. exports of crops, meat and farm products to Cuba, a 60 percent increase from the previous year, which made the U.S. Cuba's largest food provider at the time, according to the U.S. International Trade Commission.
But exports dropped by 24 percent in 2009 to $528 million, according to a report by the U.S.-Cuba Trade and Economic Council. They continued to fall last year to $344.3 million through November, compared with $486.7 million for the same period in 2009 -- a 30 percent drop.
Kavulich cited political, economic and commercial reasons for the decline of U.S. exports to Cuba, including the Castro regime's pullback in its attempts to influence the U.S. political process, its lack of a foreign exchange and its trade agreements with other countries such Brazil, Argentina, and the financial assistance it receives from Venezuela and China.
Aides to other members of the 2006 delegation did not respond to requests for comment, including Reps. Gregory Meeks, D-N.Y., Jane Harman, D-Calif.,  Mike Conaway, R-Texas, and Sen. Jerry Moran, R-Kan.
A spokesman for Rep. Jim McGovern, D-Mass., another member of the 2006 delegation, declined to comment.
"All that we know is what we've seen in the news, so we won't be having any comment at this time," McGovern spokesman Michael Mershon said in an e-mail to FoxNews.com.
An aide to Minnesota Rep. Collin Peterson, the top Democrat on the House Agriculture Committee who introduced a bill last year that would have lifted the U.S. ban on travel to the island and ease payment restrictions on agricultural products to Cuba, did not respond to interview requests either. His bill never made it out of committee.
An aide to Rep. Leonard Boswell, D-Iowa, who has said he knows Alvarez, didn't respond to a request for comment.
At a House Agriculture Committee meeting last March, Boswell told the presidents of the American Farm Bureau and National Farmers Union that he spent time with Alvarez in Cuba.
"I spent a lot of time with him," he said. "I spent quite a bit of time with Mr. Castro. Sometimes we would be entertained. I can tell you about that a little bit."
Calzon said he assumes U.S. lawmakers who visited Cuba "behaved honorably and committed no indiscretion at any time that could embarrass them."
"I hope and I pray that every lawmaker who goes to Cuba understands they are being closely watched and the Cuban government is known for taking advantage of indiscretions," he said.
Read more: http://www.foxnews.com/politics/2011/01/22/missing-cuban-official-stirs-questions-defection-food-aid-program/#ixzz1BmvR0OBI
Publicado por Unknown en 1/22/2011 12:59:00 p. m. No hay comentarios: Enlaces a esta entrada

Condoleezza Rice: "'I cannot imagine myself running for office"

But she will be a great President


New York (CNN) -- Condoleezza Rice said she is enjoying life as a college professor outside the political realm, but she says the job is similar to her previous post -- secretary of state under former President George W. Bush.
"It has a lot of things in common," Rice said in an interview airing Wednesday on "Piers Morgan Tonight." "Trying to persuade 19-year-olds -- it's not all that different than trying to persuade some heads of state."
Asked whether she would ever seek an elected position, Rice said, "I cannot imagine myself running for office. Not because politics are so tough, but it's just not me."
She currently is a professor of political science at Stanford University and a professor of political economy in the university's graduate school of business. She's been at Stanford nearly 30 years, she said.
"It's certainly different being out of power," Rice said. "You can read the newspaper and you can say, 'Oh, isn't that interesting?' You can go on to the next page if you like, which I rather enjoy."
Being a public servant, she said, is different than seeking votes. "There's no greater challenge and there is no greater honor than to be in public service. ... Sometimes we tend to impugn the motives of public servants, but I can assure you they're not there for the glory. They're not there for themselves."
"I'm not very young anymore," she said, explaining why she doesn't want to run for office. "What are you, 30?" Morgan asked. "Thank you," she replied. "Thirty-nine?" he asked. "We'll leave it at that," she said. (For the record, she's 56.)

It's certainly different being out of power. You can read the newspaper and you can say, 'Oh, isn't that interesting?' You can go on to the next page if you like, which I rather enjoy.
--Condoleezza Rice
RELATED TOPICS
An extremely private person, Rice was loath to discuss many aspects of her personal life, but said she has "come close" to marriage -- she wouldn't say how many times -- and still hasn't ruled it out, although she allowed, "I think I'm well beyond the fairy tale wedding stage."
Her ideal man, she said, would like to watch football with her all day -- "I can watch football for hours on end" -- and would like classical music. An accomplished pianist, Rice said she harbored hopes of becoming a concert pianist one day, but now believes she wasn't good enough to attain that. She still plays piano daily, she said, and recalls her proudest moment as playing with cellist Yo-Yo Ma.
Asked what kind of men she finds attractive, she told Morgan, "I don't do hypothetical ... I've never met anybody that I wanted to live with. Now, when I do, I'll let you know."
However, she said she's "actually quite easy to get along with" and no slouch in the kitchen.
"I'd cook you fried chicken," she told Morgan. "Southern fried chicken. I would cook chili perhaps. Uh, corn bread. I'm quite good at corn bread. Or perhaps because of my half-Creole grandmother, I'd cook you gumbo."