Increased sex ratio in Russia and Cuba after Chernobyl: a radiological hypothesis 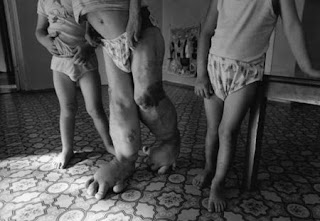 Hagen Scherb (scherb@helmholtz-muenchen.de)
Ralf Kusmierz (ralf.kusmierz@bremen.de)
Kristina Voigt (kvoigt@helmholtz-muenchen.de
Synoptic analysis of Russian and Cuban secular sex ratio trends
We compare the sex ratio trends of Cuba (1958 – 2011) and Russia (1959 – 2010) and
quantify pertinent effect-parameters of those trends, especially the jumps in 1987. The
relevant annual births figures by gender are presented in Table 2 (for the original data sources
see: http://www.one.cu/anuariodemografico2011.htm, http://data.euro.who.int/hfadb/, and
http://www.mortality.org). Sex ratio in Russia follows an overall linear decline from 1959 to
1986 with a reduction per 10 years of 0.12% (0.04, 0.20), p value 0.0021 (Figure 2). We may
estimate a significant jump of the sex ratio from 1986 to 1987 of 0.51% (
0.28, 0.75), p value< 0.0001. From 1987 onward, there is a long-term sex ratio increase to
maximum values in 1999/2000 of nearly 1.065 and a subsequent decline after the year 2000. A parsimonious model for the partial Russian sex ratio trend after Chernobyl is a 2
nd degree polynomial, i.e. anparabola with p value < 0.0001. If the decline starting in 2000 will continue linearly and undisturbed, the Russian sex ratio is to resume normal pre Chernobyl
values near 1.05 beyond the year 2020. Sex ratio in Cuba from 1958 to 1986 follows an essentially constant trend with no strong overall upward or downward tendency before Chernobyl
(Figure 3). In Cuba, we may estimate a jump in 1987 of 2.99%; (2.39, 3.60), p value < 0.0001, which is six times the jump estimate of the Russian sex ratio in 1987. Moreover, there are still even stronger increases in Cuba in 1995 and 1996 exceeding a sex ratio of 1.15. A well-fitting,
however less parsimonious model for the partial Cuban sex ratio trend after Chernobyl
consists of a 3rd degree polynomial adjusted for the extreme values in 1995 and 1996. This
model approaches nearly normal pre-Chernobyl values of 1.06 around the year 2010. It is,
therefore, quite obvious that in Cuba and Russia the sex ratio trends that had existed before
the Chernobyl accident are markedly disturbed immediately afterChernobyl albeit the
temporal patterns of the sex ratio changes as well as the maximum values taken on differ considerably between the two countries.
Keep reading at  http://www.ehjournal.net/content/pdf/1476-069X-12-63.pdf
Publicado por Unknown en 8/20/2013 09:07:00 a. m. No hay comentarios:

Annya's parents lived in a town so contaminated by the Chernobyl nuclear disaster that it was destroyed and buried. When she was four, Annya was diagnosed with a brain tumor. Photographer Robert Knoth visited Annya in Belarus in 2005 and returned in 2011.

#Chernobyl in the #US?

Though it has been 25 years since the Chernobyl disaster, has much changed in terms of safety when it comes to nuclear plants? The facilities at Fukushima were said to be an improvement from Chernobyl, so as the US turns toward building new plants in Texas, how weary should Americans be? Investigative journalist Greg Palast says the alternative to nuclear power are safer and cheaper and that Americans shouldn't be quick to think that a disaster won't happen on their own turf.
Publicado por Unknown en 4/26/2011 05:05:00 p. m. No hay comentarios:

Twenty five years since the meltdown at the Chernobyl nuclear plant, fears linger that the disaster will one day repeat itself. On the eve of the tragic anniversary, Ukraine's seeking funds to complete a new containment shelter over the reactor's remains, which are still emitting dangerous levels of radiation. 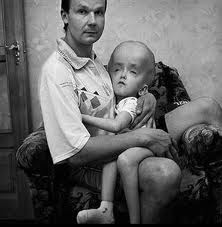 Japanese government is considering the construction of a containment shell at the damaged Fukushima nuclear power plant. It would be aimed at averting further radiation leaks in a crisis that is still described as 'grave'. The plan would involve the three most badly damaged reactors being covered with hi-tech material. The level of radiation measured in sea water near the site, is now said to be around three and a half thousand times higher than normal. Workers have been unsuccessfully trying to restore the cooling system at the facility, in what is now the worst atomic crisis since Chernobyl. RT spoke to nuclear energy expert Lars Polmeier, who says there are parallels with that disaster 25 years ago.

RT's Alexey Yaroshevsky has traveled to the Chernobyl exclusion zone to find out whether nature is showing any signs of recovery there. He sent this report from the area abandoned after the catastrophe.

Ukraine to open Chernobyl nuclear disaster area to tourists in 2011