Central Planning and The Fall of the US Empire

Here's some thinking that draws on decision making theory.  It's very much in line with how the late John Boyd (America's best strategist) would approach it. Reminder:  I'm @johnrobb on twitter or +John Robb on Google if you want to listen in on my daily thinking.
___________
One of the most interesting underlying reasons for the decline of the Soviet Union, and soon the US, is misallocation of resources due to a reliance on central planning.
Misallocation in this context means that year after year, decade after decade, the wealth of a nation is spent on the wrong things.  The wrong projects are funded.  The wrong infrastructure is built (or not built -- the US is 38th in the world in Internet connectivity and falling).  The wrong things were bought and so on.  Eventually, the accumulation of bad investment made the USSR so fragile that even the smallest shock could topple them.
The reason for this failure was that the Soviets relied on central planning.  A system of economic governance where small group of people -- in the Soviet Unions case bureaucrats -- had all the decision making power.  They decided what was spent and where.  Even with copious amount of information, they decided badly.
Why did they decide badly?  The massive economy of a modern superstate is too complex for a small group of people to manage.  Too much data.  Too many uncertainties.  Too many moving parts.
The only way to manage an economy as complex as this is to allow massively parallel decision making.  A huge number of economically empowered people making small decisions, that in aggregate, are able to process more data, get better data (by being closer to the problem), and apply more brainpower to weighing alternatives than any centralized decision making group.
Of course, the misallocation due to centralized decision making wasn't supposed to be a vulnerability of the West.  To allocate resources in our economy, we had a conceptually more efficient mechanism: markets.  Markets are supposed to be a mechanism that allows massively parallel decision making.
Those assumptions are proving false. The succession of market bubbles, the global financial collpse of 2008, and the recent US debt problem is prima facie evidence that gross misallocation has occurred for decades.  The wealth of the West, particularly the US, is being spent on the wrong things year after year, decade after decade.   We are now as fragile as the Soviet Union in the late 80's.
What happened?
Central planning took over the decision making process in the US, both through the growth of government and through an unparalleled concentration of wealth.
The parallels between the rapid growth of US government bureaucracy and the Soviet bureaucracy is straight forward.  As more and more of US economy was controlled by a narrow group of decision makers allocating government resources, the more sluggish the entire economy became (most of this was due to massive growth and mis-allocation in entitlements and defense).  Further, the ability of government bureaucracies to extend their decision making to remaining majority of the economy through regulatory action, is also a form of centralization.  However, even with all of this government growth, it's is still not enough to account for the level of misallocation we are seeing.
There's is something else at work.
The answer is that an extreme concentration of wealth at the center of our market economy has led to a form of central planning.   The concentration of wealth is now in so few hands and is so extreme in degree, that the combined liquid financial power of all of those not in this small group is inconsequential to determining the direction of the economy.   As a result, we now have the equivalent of centralized planning in global marketplaces.  A few thousand extremely wealthy people making decisions on the allocation of our collective wealth.  The result was inevitable:  gross misallocation across all facets of the private economy.
To see what this extreme wealth concentration looks like as a distribution, we don't have to look further than income distribution in the US (classic power law).   The liquid wealth of those on the extreme left of the curve completely outweighs the 99.5% of the population to the right (the distribution is FAR more skewed than most people even imagine -- Republican or Democrat).  This graph would also be a good way to demonstrate how decision making in a bureaucratic dictatorship in a country like the Soviet Union looked like before it collapsed. The result of central planning in the US has finally hit the wall.  The list of problems is endless. The misallocations range from the dangerous $600 trillion derivatives market to the destruction of the US middle class (by exporting jobs and the substitution of income with debt).
The end result is that our economic and political system has become very fragile.  All it will take is is one extremely bad decision and the cascade of failure that follows will catch everyone off guard.
Publicado por Unknown en 10/19/2011 11:58:00 p. m. No hay comentarios: Enlaces a esta entrada

Disturbing Similarities Between the Fall of Rome and Today’s America 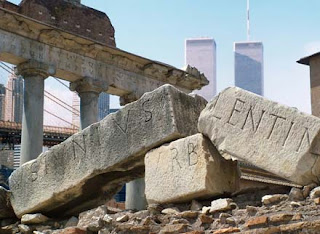 My specialty is American history, but graduate school forces you to learn other branches of history as well, so it was not any great struggle to teach Western civilization. Still, when I do teach a class outside my concentration, I spend some time reading recent scholarship as well. If a student asks a question beyond what the textbook covers, it helps to be sufficiently well read in the field not to look stupid!