Louis Zamperini: Unbroken at Sea and in a P.O.W. Camp, Made Whole by Christ “I was too busy staying alive to think about dying,” World War II veteran Louis Zamperini told his son about his ordeal lost at sea and then locked up in a prisoner of war camp.
The famous runner’s real tests of endurance came the decade after his experience competing in the 5000 meters at the 1936 Summer Olympics in Berlin, when he floated at sea for a month-and-a-half and subsequently endured vicious beatings by a sadistic guard nicknamed “the Bird” during two years in Japanese captivity. Luke Zamperini tells Breitbart Sports, “These were my bedtime stories growing up.”
Luke Zamperini’s bedtime stories become everybody’s silver-screen stories on Christmas Day through Angelina Jolie’s cinematic adaptation of Laura Hillenbrand’s Unbroken. The Zamp, owner of a record 4:08 mile as a collegian, retained exquisite timing long after he had hung up his track shoes. The Christian immortalized as a celluloid hero on Christmas, like the patriot passing days before this past Fourth of July, shows that death doesn’t kill a man’s timing.
It often replaces the substance of a man with a symbol. But the symbolism of a Christmas Day release of Unbroken makes it hard to miss the substance of Louis Zamperini. He ran the 5000 meters in the Olympics for a few minutes in the mid-1930s and suffered in a POW camp for a couple of years as Americans assumed him dead during the mid-1940s. He spread Jesus Christ’s gospel for more than six decades.
Like Christ, Zamperini lived past his obituary and figured prominently in a bestselling book. The comparisons don’t go much further for the life celebrated in the pews on Thursday and the one celebrated in the movie-house aisles. The former juvenile delinquent drank with zeal, hastily scheduled barroom boxing matches with unwitting, conscripted opponents, and projected the bitterness in his soul upon the world immediately following the Second World War.
“He was a vengeful man,” Luke Zamperini informs. “The Bird beat him mercilessly for over two years. My dad suffered from what’s today referred to as post-traumatic stress disorder. He was having nightmares of the Bird beating him that inevitably ended with him strangling the life out of the Bird.” Zamperini longed to return to Japan “to finish him off,” concedes his son.
Instead of squeezing the life out of the Bird, Billy Graham infused new life into Zamperini. “Hearing Reverend Graham speak reminded him of the promises on the life raft and in the prison camp that he had made to God,” Luke Zamperini tells Breitbart Sports of the violent and boozed-out postwar version of his dad. “He felt he hadn’t lived up to his side of the bargain.”
“His hatred for the Bird wasn’t hurting the Bird one bit,” son says of father. “It was destroying Louis Zamperini.” The bitter veteran put down the bottle and picked up the Bible. The sleep that followed the Olympian’s close encounter of the Billy Graham kind, his son explains, resulted in “the first night he did not have that nightmare and he did not have that nightmare for the rest of his life.”
Whereas others might have wished not to revisit the painful events, Zamperini used them for inspiration to start an outdoorsman camp for boys and to speak to groups about the force that saved his life. “He made a living talking about it,” Luke Zamperini notes. “He was a famous American athlete who seemingly came back from the dead. He was given the key to every city.” Holding in his war story didn’t work for Zamperini. Letting it out did.
Zamperini’s saga includes the highs of running in the Olympics and the lows of cleaning a pig sty with his bare hands. It’s an amazing tale of survival, evading strafing Japanese planes and capturing food on the raft with the primitive hunting tools available at the end of his arms. It’s more importantly a story, like the story whose beginnings Christians celebrate today, of redemption. In a life of service to his savior, Zamperini embodied the central message of his faith.
Louis Zamperini enjoyed a Hollywood ending. It emanated from enjoying a Christian life. Readers and now viewers of Unbroken marvel at the better-than-fiction quality to the miler’s tale of superhuman endurance. The story’s greatness surely stems from the protagonist’s awareness of the greatest story ever told.
Publicado por Unknown en 12/26/2014 03:32:00 p. m. No hay comentarios: Enlaces a esta entrada

Fox News
An 8-year-old boy who died after saving six relatives from a fast-moving blaze in his grandfather’s trailer home in western New York is being remembered as a hero.
Tyler J. Doohan awoke his grandmother, aunt and cousins, including two children ages 4 and 6, after spotting the fire early Monday in the single-wide trailer off Route 441 in Penfield. Firefighters said Tyler’s body was later found near the bed of his disabled uncle, Steven D. Smith, 54, whom he was trying to save, as well as his 57-year-old grandfather, Louis J. Beach, the Democrat & Chronicle reports

.
“The roof has collapsed on the front half of the trailer and one of the individuals was found there, probably on a couch, but there was nothing left to even see if it was furniture,” Penfield Fire Chief Chris Ebmeyer told the newspaper. “In the rear, there was a bedroom and the other deceased male was found in a bed. The child was a few feet away.”

"In bravely and selflessly giving his own life, he was able to save the lives of six others — and he is truly a hero.”

- East Rochester School District Superintendent Richard Stutzman, Jr.
Ebmeyer said Tyler “saved those six other people” from a fire that apparently started due to an electrical problem.
Neighbors and school officials, meanwhile, remembered Tyler, of East Rochester, as an energetic boy who spent much of his young life in different homes and school districts.
“With great sadness, the East Rochester School District confirms one of the three victims of an early-morning fire in Penfield was a fourth-grade boy at our school,” reads a news release from interim Superintendent Richard Stutzman Jr. “It is extremely important to remember that, according to emergency personnel, [Tyler] was the person who discovered the fire and tried to wake the eight other people in the residence at the time. In bravely and selflessly giving his own life, he was able to save the lives of six others — and he is truly a hero.”
Counseling and support services were made available to all students within the district and some students at East Rochester Elementary School visited with counselors, Stutzman told FoxNews.com.
Plans for a possible memorial are being mulled, but nothing had been finalized as of Wednesday, he said.
"We're just trying to get through the next few weeks," Stutzman said.
Neighbor Jack Simms, 75, said Tyler, often a "mischievous little kid," spent a lot of time at the residence in the past few years.
"I saw him in the yard a lot," Simms told FoxNews.com. "He was kind of a wild boy, always active."
Simms said his wife witnessed the fire break out as she laid in bed early Monday, unable to sleep.
"She heard a boom and then saw a big flash of light," Simms continued. "Then she got out of bed and looked out the window and saw flames coming out of the door."
Within minutes, emergency responders and police officials were on the scene, Simms said. He was unable to see Tyler, who had apparently walked around the trailer in an attempt to reach his disabled uncle.
"It's very, very said," Simms said, adding that mourners are leaving flowers and stuffed animals in honor of Tyler at a makeshift memorial outside the trailer home.
More than $7,500 has been raised to help cover the cost of Tyler's memorial service, according to an online fundraiser

. Funeral arrangements were not immediately available.
Other neighbors said they had been told by occupants of the trailer that officials of Morgan Management, which owns the Monroe County park, deemed it unlivable on at least one occasion and were concerned by the number of people living there.
“There was too many people, where would you put all those people?” neighbor Michelle Brosseau told the Democrat & Chronicle, adding that she considered notifying county officials. “Now, maybe, I wish I had called.”
FoxNews.com's Joshua Rhett Miller contributed to this report.
Publicado por Unknown en 1/22/2014 01:08:00 p. m. No hay comentarios: Enlaces a esta entrada 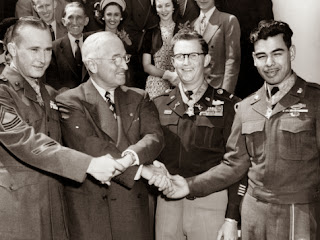 Rodolfo Hernandez, who received the Medal of Honor for rushing into heavy fire while wounded and armed with only an inoperable rifle and bayonet and then killing six enemy soldiers during the Korean War, died on Saturday in Fayetteville, N.C. He was 82.

The Congressional Medal of Honor Society announced his death on itswebsite. Mr. Hernandez was an Army corporal trying to hold a hill in May 1951 when his platoon was overwhelmed by attackers accompanied by heavy mortar, artillery and machine gun fire.
Corporal Hernandez had already been struck by grenade fragments and was bleeding heavily from a head wound when his commanding officer ordered his platoon to fall back. He continued firing until his rifle malfunctioned, then threw six grenades and charged at the opposing foxholes.
Read the rest of the story at the New York Times >>
Publicado por Unknown en 12/27/2013 11:36:00 a. m. No hay comentarios: Enlaces a esta entrada

Who is Ohio "hero" Charles Ramsey?