Woman films 'selfie' video whilst having a stroke, after doctors told her it was stress

Smart refrigerators and TVs hacked to send out spam, according to a new report

NBC News.com
Julianne Pepitone
Et tu, refrigerator?
A new report shows cyberattacks aren’t relegated to laptops anymore: Now, even a fridge or a TV can send malicious emails.
Security firm Proofpoint has uncovered a cyberattack that involved the hacking of “smart” home appliances connected to the Internet. Hackers broke into more than 100,000 gadgets -- including TVs, multimedia centers, routers, and at least one fridge – and used the appliances to send out more than 750,000 malicious emails between December 23 and January 6.
The attack also included compromised laptops and tablets, but Proofpoint said about 25% of the emails were sent from appliances beyond the traditional Internet-connected gadgets.
According to Proofpoint, the cyberattack could be the first proven breach of the so-called “Internet of Things”: an exciting tech trend that promises a Jetsons-like future, with all of our home appliances and other gadgets connected to one another.
But as smart home devices – like Nest, the thermostat and smoke detector company Google bought for $3.2 billion this week – continue to grow more popular, Proofpoint’s report is a sobering reminder that anything connected to the Internet can potentially be hacked.
“The ‘Internet of Things’ holds great promise for enabling control of all of the gadgets that we use on a daily basis,” said Michael Osterman, principal analyst at messaging-focused research firm Osterman Research, wrote in Proofpoint’s report. “It also holds great promise for cybercriminals … to launch large and distributed attacks.”
To launch those types of large-scale attacks, hackers link up compromised devices to create what’s called a botnet: an army of “zombie” devices that attack other computers through tasks like overloading a website with traffic or, in this case, sending hundreds of thousands of spam emails.
These attacks can be more difficult to track as the world of Internet-connected devices expands far past laptops and tablets. In the attack Proofpoint detailed, no more than 10 emails were sent from any single IP address, making it tough to block based on location.
Perhaps worse: In “many cases,” the smart devices weren’t difficult to hack, according to Proofpoint. Instead, the appliances either were not set up correctly, or they used default passwords that were easy to find on public networks.
Proofpoint does have a vested interest in this issue, as a security firm that sells solutions to protect gadgets from such attacks.
But by 2020, research firm Gartner expects more than 30 billion Internet-connected devices will be in use worldwide – up exponentially from 2.5 billion in 2009.
As the Internet-connected world expands to thermostats, refrigerators and even window shades, so too grows the threat of potential cyberattacks -- even in the frozen foods aisle.
Publicado por Unknown en 1/18/2014 07:15:00 p. m. No hay comentarios:

Google Builds a 'Nest' for Future of Smart Homes

breitbart
By MICHAEL LIEDTKE
AP Technology Writer
SAN FRANCISCO
When our Internet-connected gadgets and home appliances all learn to talk to each other, Google wants to be at the center of the conversation.

This imagined future is still a few years away, but Google is already preparing with its $3.2 billion acquisition of high-tech thermostat and smoke-detector maker Nest Labs.

The surprise deal announced earlier this week will provide Google Inc. with more tools to build a valuable hub for homes. It's a world of network-tethered toasters and tea kettles, or a so-called "Internet of Things," that is destined to reshape society, experts say, in the same way that smartphones have done in the seven years since Apple Inc. unveiled the iPhone.

The research firm Gartner Inc. expects more than 26 billion objects to be connected to the Internet by 2020, a figure that doesn't include personal computers, smartphones or tablets. That would be a nearly 30-fold increase from roughly 900 million Internet-connected things in 2009.

Google established itself as an instrumental player in smartphones with the 2008 release of Android, a free operating system that runs on more mobile devices than any other piece of software. Now, the company is gearing up for the advent of the smart home with the help of Nest Labs, a 300-employee company started in Palo Alto, Calif. less than four years ago. Tony Fadell, Nest's founder, is an Apple veteran who helped design the iPod and the iPhone.

As influential as smartphones have become, their role in understanding people's habits and preferences could be eclipsed once everything in the home has a computer chip and is connected to the Internet.

"Google bought Nest in order to learn about this world where even more information is going to be accessible by computers," said Forrester Research analyst Frank Gillett.

Nest Labs quickly won over gadget lovers with its 2011 release of an Internet-connected thermostat that learns to cool and heat homes to suit the needs of the inhabitants. Late last year, the company followed up with a smoke and carbon-monoxide detector equipped with voice technology and the ability to communicate with the company's thermostat. Nest hasn't said how many of its devices have been sold, though analysts believe they are in just a small fraction of homes. The products have only been available in the U.S., Canada and the United Kingdom.

Google hasn't disclosed its specific plans for Nest, but analysts anticipate an entire line of Internet-connected home products will be coming to countries around the world. Some of those Nest devices could be melded with existing Google services in an effort to make people's lives easier. Such a move also would provide Google with the means to gather more insight that could be used to sell the digital advertising that generates most of the company's revenue.

In a blog post about the Google acquisition, Nest Labs co-founder Matt Rogers promised that customers' personal information will only be used for "providing and improving Nest's products and services. We've always taken privacy seriously and this will not change."

But that pledge won't preclude Google from incorporating its services with Nest's products, said Gartner analyst Angela McIntyre. For instance, Google already makes a digital assistant called "Google Now" that strives to learn what its users like and where they tend to go so it can provide helpful information without prompting. McIntyre believes Nest's products will teach Google Now to become more helpful so it can increasingly take over more of the mundane tasks in people's lives.

"They need to gather as much information as they can to understand the context in how we live our lives," McIntyre said.

Google also could plug its digital mapping software into Nest products so it could learn the layout of a home, said Brian Proffitt, a technology analyst who is also a management instructor at the University of Notre Dame. That knowledge could then be deployed to delegate such household chores as vacuuming to a robot that would be able to rely on the interior maps to navigate its way through an entire home without human help, Proffitt said.

A Google division run by Android creator Andy Rubin is working on various ideas for robots, though the Mountain View, Calif., company hasn't shared many details about its goals. Google's expansion into robotics is also being bolstered by a spate of acquisitions that included the recent purchase of Boston Dynamics, a U.S. military contractor that has already built a variety of contraptions that can be programmed to run at rapid speeds, leap high into the air and climb rocky terrains.

Even as it explores various technological frontiers, Google still makes most of its money from advertising tied to search requests. Acquiring and developing products with Internet connections and environmental sensors can only help Google get an even better grasp on people's interests.
Pocketnow

Kim Jong-Un and the Mysterious Smartphone 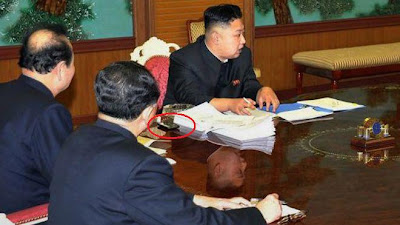 Bet the Hardy Boys couldn’t solve this one.
A picture of North Korea’s leader holding a lit cigarette with a black smartphone near to hand has the tech world in a tizzy -- but the mysterious maker of the phone remains an enigma.
South Korean smartphone giant Samsung has distanced itself from the gadget, according to AFP, denying any connection to the device.
"It's not a Samsung phone," a company spokesman told AFP, adamantly denying that one of its flagship Galaxy models had turned up across the border.
South Korea's Chosun Ilbo newspaper suggested politics was behind the brand choice.
"It must have been politically uncomfortable for Kim Jong-Un to use products made by the U.S. ... and he can't publicly endorse the fact that the South is more technologically advanced," the daily said.
But it’s not even clear whether Kim Jong-Un himself owns the phone or is merely near it. South Korean government officials said they believe it his, but did not confirm that fact.
"It's believed that the smartphone belonged to Kim given that the device was placed right next to the documents he was looking at," a Seoul government official told AFP.
The Seoul government official said the picture had been analyzed by the South's intelligence agency, which concluded that HTC was the likely manufacturer.
But the Taiwanese firm declined to identify the device, saying in a statement that the company appreciated the "support of all users."
For more information on Kim Jong-Un’s mysterious phone

, read the full story on news.com.au.