Led by U.S. Rep. Ileana Ros-Lehtinen (R-Fla.), a bipartisan group of members of the U.S. Congress have sent a letter to the Nobel Committee nominating Cuba’s Ladies in White for the 2013 Nobel Peace Prize.

In addition to Ros-Lehtinen, the cosigners of the letter are:

Here's a copy of the letter:

As Members of the United States Congress, we nominate the Ladies in White to receive the 2013 Nobel Peace Prize. These brave women come together every Sunday dressed in their signature all white garments carrying a symbolic gladiolus flower as they walk to attend Catholic mass to pray for the release of their loved ones. In response to these peaceful demonstrations, the Castro regime has employed its thugs to viciously harass, intimidate, and imprison the Ladies in White to disrupt their weekly walks.

The Ladies in White (Las Damas de Blanco) are a leading Cuba based pro-democracy group that was formed by the wives, mothers, sister and aunts of Cuban political prisoners to advance their cause in the call for freedom and human rights. By serving as non-violent and outspoken activists against the Cuban dictatorship, one of the most oppressive regimes in the world, they have struggled against everyday tyranny and dedicated themselves to political reform.

A leading founder of this movement, Laura Pollan became ill after enduring another beating at the hands of Cuban State Security and died in October 2011. She was an active critic of the Castro dictatorship after her husband was arrested in March 2003 with 75 other independent journalists and dissidents, during what is now referred to as the Black Spring. Since that time, the Ladies in White have projected a peaceful message of change and brought international attention to the plight of prisoners of conscience in Cuba. In 2005, the Ladies in White were even awarded the Sakharov Prize for Freedom of Thought by the European parliament for their work, but the group was unable to accept the award because they were not granted authorization by the Castro regime to travel to France to accept it.

In the last year, we have witnessed a dramatic increase in the number of arbitrary arrests, beatings, and abuse of peaceful dissident groups by the Cuban regime. In fact, just last week, over 35 members of the Ladies in White were beaten, threatened, and temporarily arrested while on their way to mass by Castro’s security forces. These abuses and restrictions of basic freedoms and rights are a commonplace occurrence in Cuba. Ms. Pollan understood this and even after her husband was released she continued the struggle for freedom stating, “I started fighting for my husband, then for the group, and now it’s for changes for the better of the country.” These words underscore that there will never be real change and freedom on the island until there is a political change from the current communist regime.

To this day, millions of Cubans continue to live under the oppressive Castro dictatorship. Freedom of expression, freedom of assembly, and due process of law continue to be forbidden by the communist regime. The courageous members of the Ladies in White understand this denial and have dedicated their lives to promote change through non-violent social action and resistance. They may not have started out as activists, but through their fearless efforts they have become the voices of a generation that will no longer tolerate the cruelty and violence of the Castro regime.

Their achievements have not gone unnoticed. Amnesty International has commented that, “Cuban authorities must stop repressing legitimate dissent and harassing those who are only asking for justice and exercising their freedom of expression.” In similar support, Freedom House noted that “the group helped raise awareness and expand the movement beyond the capital of Havana and was instrumental in the release of the political prisoners.”

By awarding these activists the Nobel Peace Prize, the international community has the opportunity to bring worldwide attention to the plight of the Cuban people and promote the fundamental freedoms that have been denied to the citizens on the island for so long. It is our moral obligation to join the voices of those who are suffering under oppression and help them achieve freedom.
Publicado por Unknown en 2/02/2013 01:23:00 p. m. No hay comentarios: Enlaces a esta entrada

The 2011 Nobel Peace Prize is awarded jointly to Ellen Johnson Sirleaf, Leymah Gbowee and Tawakkul Karman "for their non-violent struggle for the safety of women and for women’s rights to full participation in peace-building work".

By Keith B. Richburg
Washington Post Foreign Service
Saturday, February 19, 2011; 1:09 PM
BEIJING - Liu Xia, wife of the imprisoned Nobel Peace Prize laureate Liu Xiaobo, was able to briefly break her government-imposed silence this week and tell a friend in an Internet chat that she was "miserable," being held at home against her will and had seen her husband just once since his Nobel award was announced in October, according to the friend's transcript of the conversation. 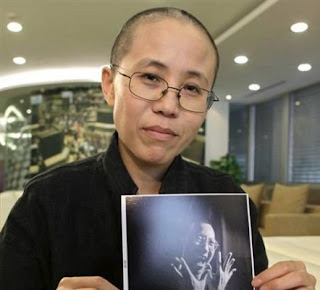 Liu Xiaobo: I Have No Enemies: My Final Statement