Has Democracy Met The Stress Test In Post-Communist Europe? 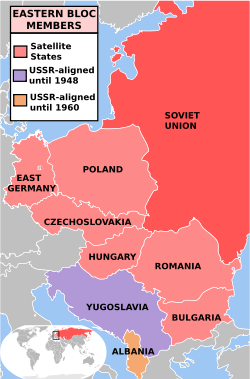 Map of the Eastern Bloc
By Adrian A. Basora
The global financial crisis and its European aftermath have created, in effect, a major stress test for democracy in the ten post-communist countries of the European Union. The good news is that a majority of the “EU-10” nations have passed the test, some with flying colors. The bad news is that Hungary, one of the early front-runners of democratic transition, has so far failed the test—with potentially ominous consequences—and that three others have so far rated only a weak “pass” on the political side despite their positive economic results.
When the economic crisis began in 2008, many observers feared that the looming trauma might devastate these ten fledgling democracies just recently admitted to EU membership. Now, four years into the crisis, nine of the countries in question (Estonia, Latvia, Lithuania, Poland, Czech Republic, Slovakia, Romania, Bulgaria and Slovenia) have for the most part done remarkably well on the economic portion of the stress test, particularly considering the relative newness of their democracies and of their market economies.
All nine have regained their financial viability and restored economic growth. Their success stands in sharp contrast to the southern tier of the EU: Greece, Italy, Spain and Portugal, even though these four countries have much longer-established democracies. This accomplishment is all the more striking in that most of the EU-10 nations initially faced sharper and deeper recessions than did their Western European counterparts.
On the political side, it is also striking that a solid majority of these countries have weathered the crisis without significant damage to their democratic political systems. For six of the ten (Estonia, Latvia, Lithuania, Poland, Czech Republic and Slovenia), the current level of democratic performance, as measured by Freedom House, remains essentially consistent with pre-crisis levels. A couple of them have arguably even strengthened their democracies by virtue of meeting such a major challenge successfully.
Unfortunately, the other three EU-10 countries that did well on the economic side of the stress test (Slovakia, Romania and Bulgaria) merit only a mediocre “pass” on the political side. They have since 2007 experienced some slippage of their Freedom House democracy scores, although the erosion has so far proven more limited than many analysts had feared, and all three continue to be rated as democracies. Nevertheless, the situation merits careful monitoring. Given the continuing fragility of these three new democracies, there could be significant regression if the current economic stagnation in the western EU countries continues long enough to create new recessions in September 2012 these three trade- and investment-dependent states.
The one major outlier among the EU-10 is Hungary, which just a few years ago was widely seen as a well-established democracy and market economy. Under Prime Minister Viktor Orban, the country has over the past two years experienced an ominous undermining of its democratic institutions. Hungary now faces a significant threat of return to autocratic rule. Taking advantage of the strong electoral mandate that he received in the 2010 elections, Orban has consolidated power in his own hands to an unprecedented degree. And he has used his 67 percent “constitutional majority” in the parliament to take numerous autocratic initiatives that threaten to severely undercut key Hungarian democratic institutions.
Hungary has also done poorly on the economic aspects of the stress test. The country’s finances and growth were by far the weakest among the EU-10 as of 2007, and its performance in re-establishing financial viability and economic growth remain sub-par for the region. Orban has focused more on maneuvering in what he sees as his own short-term political interest than on making difficult but necessary economic reforms.
On the political front, Orban has backed away from or watered down a few of his autocratic measures thanks to considerable pressure from the EU, the IMF and others. However, a great majority of these measures remain in place and could threaten the integrity of Hungary’s next elections, which are due in 2014. Thus, the next two years could prove a make-or-break challenge for Hungarian democracy. (For a fuller discussion of the situation in Hungary, go to the Project on Democratic Transitions page on the FPRI website, at http://www.democratictransitions.net/hungary.)
The following table highlights the economic impact of the crisis in each of the EU-10 countries:
Table II below shows the overall pattern of EU-10 political evolution from pre-crisis levels to the present, as measured by Freedom House:
*The “Change” column uses negative numbers to represent a decline in scores, and positive numbers represent an improvement for ease of interpretation. Technically, the Freedom House scoring system uses lower numbers to categorize more democratic systems, and thus a higher numerical score connote deterioration, but it was felt that using a “plus” sign to denote deterioration in the above chart could lead to confusion. In the FH approach, scores between 1.00 and 2.99 classify a country as a “Consolidated Democracy” and scores between 3.00 and 3.99 define a “Semi-consolidated Democracy.” Scores from 4.00 to 7:00 correspond to Hybrid, Semi-Authoritarian, and Authoritarian regimes, respectively.

While many factors have influenced both economic and political outcomes in the EU-10 countries over these past four years, here are some of the main drivers that appear to explain the successful outcomes (or, in the case of Hungary, regression):

It is encouraging that a majority of the EU-10 nations remain well inside the democratic camp despite the severe economic challenges of the past four years. However, there are certainly no grounds for complacency. Three of the ten (Hungary, Romania and Bulgaria) currently show significant shortfalls in their democratic performance, despite their membership in the EU, NATO and other Western organizations. This should be a matter of serious concern in both Brussels and Washington.
Hungary’s rapid regression—from having been one of the post-communist transition’s earliest success stories, to now being on the verge of sliding back into the group of semi-consolidated democracies—is highly worrisome. The Hungarian case shows that even a full generation of post-communist transformation and a high degree of economic integration with the West are not enough to ensure that democracy advances to the point of virtual irreversibility. It also demonstrates how much damage can be done by one strong-minded leader—in this case Viktor Orban—who combines strong demagogic political appeal with autocratic personal tendencies. It is thus imperative for the U.S. and the EU to employ maximum leverage and diplomatic skill to maneuver Hungary back onto the path of democratic consolidation.
Romania and Bulgaria also remain worrisome. While they have handled the economic crisis reasonably well and—in contrast with Hungary—have regressed only marginally in their democratic performance, they remain democratic laggards. The concern is based not on their minor political regression since the economic crisis, but rather on the low levels of democratic consolidation that they had achieved before the crisis. Although some of the foundation-stones of democracy in these two countries remain in place (such as a relatively free electoral process and an active civil society), their governance structures are still highly deficient. Both countries suffer from pervasive corruption, politically-manipulated media, and political leaders who see government primarily as a spoils system for their own benefit.
Both Romania and Bulgaria are thus far from meeting the democratic standards to which their governments professed a commitment at the time of their EU accession in 2007. In retrospect, it is clear that their accession was based more on promises than on actual achievements. Although the economic crisis that struck them in 2009 fortunately did not result in a significant setback to democracy, neither did the promised and much-needed political progress materialize. Both countries still have the potential to become consolidated democracies, but getting them there will require tough-minded and persistent pressure from Brussels, Washington and other Western powers.
Slovakia is the one other country among the EU-10 that merits some extra attention. As of 2004, Slovakia had joined the ranks of front-runners in terms of post-communist economic and political reform. However, as detailed in the PDT Country Report, Slovakia experienced significant democratic erosion from 2006 to 2010. A coalition government led by Social Democrat Robert Fico, but beholden to two smaller xenophobic and undemocratic parties, undercut some of the exemplary reforms that had been put in place over the previous eight years. However, the center-right government of Iveta Radičova that followed Fico quickly re-instituted the same reform agenda that had made Slovakia a front-runner when a similar coalition ruled in the 1998-2006 period.
Through political maneuvering related to the Euro-crisis, Fico was able to force early elections, and he once again became Prime Minister as of March 2012. This time, however, he has an absolute Social Democratic majority in parliament and is thus no longer burdened with his former unsavory coalition partners. Given Fico’s desire for respectability in Brussels and for the material benefits that the European Union can provide to new members in good standing, there is reason to hope that Slovakia’s status as a consolidated democracy will be re-affirmed. However, the situation merits careful vigilance by Brussels and by Washington, along with a willingness to use all available leverage if needed.

With much of Western Europe once again either in recession or virtually stagnant, and with the euro crisis still not fully resolved, the EU-10 countries are faced with the prospect of at best slow economic growth in 2012 and a possible recession in 2013. This, in turn, would translate into new stresses on their political systems. Although a majority of these young democracies have so far proved more resilient than many had feared, the Hungarian case shows that they are far from invulnerable.
At the end of the long and costly Cold War the United States and its NATO allies, in close partnership with the EU, made extraordinary—and extraordinarily successful—investments aimed at democratizing post-communist Europe. Despite the spectacular gains of the 1989-2004 period, developments over the past few years mean that the task is not yet fully completed. The recent regression of Hungary and the remaining democracy deficits in Romania and Bulgaria instead make it clear that some of the early successes could still unravel.
Washington and Brussels should therefore work together to finish the job and to consolidate these historic advances in building democracy and viable market economies. The alternative would be to permit, through neglect, a broadening of the regression that we have seen recently in Hungary, not to mention Ukraine, Belarus and all too many of the other post-Soviet states.
Publicado por Unknown en 10/09/2012 09:54:00 a. m. No hay comentarios: Enlaces a esta entrada