OLPL: On Business With the Castro Regime 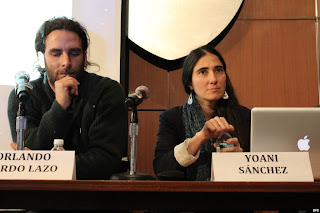 During an interview with TV Marti this week, Cuban artist and blogger, Orlando Luis Pardo Lazo, expressed his frustration with the dealings of foreign governments and companies with the Castro regime.

Cuba’s bloggers are as sharp abroad as at home

MiamiHerald
By Fabiola Santiago
The Cuban bloggers, bold chroniclers of totalitarian rule, are traveling in winter, an apt metaphor for the old order they’re challenging back home, and to a smaller but no less significant extent, for that of the traditional exile.

The weather casts a gray patina on their photos from Europe and New York, but their tongues are as sharp abroad as they are inside Cuba when they denounce the arrests of dissidents or illustrate — as they’re doing now with Cuba’s new travel policy — what it’s like to live in their world.
In one word: Treacherous. Whether inside Cuba or out.
Their words are dissected: Do they call it “the embargo,” as in the United States, or “the blockade,” as in Cuba?
Their motives are questioned: Are they true opponents of the regime, or useful fools?
Criticism comes at the ready from all sides, including from Cuban-government-planted bloggers and from those competing for attention and prominence — some of them exiles who were once branded Communist sympathizers themselves.
It’s nasty and dangerous out there, yet the bloggers cross borders, participate in panels, collect prizes for their work that they were given years ago, when the government denied them permission to leave.
“Their humanity shines through,” Ted Henken, a “ cubanólogo” and professor at Baruch College in New York, tells me. He knows the bloggers well. He’s hosting Pardo and Sánchez in New York, and pens the blog El Yuma, titled after the affectionate street term in Cuba for the United States.
Along with their discoveries, the traveling bloggers retweet news that the Spaniard Angel Carromero has confirmed that the deaths of opposition leader Oswaldo Payá and Harold Cepero in a car crash in Cuba were caused by Cuban government operatives. Carromero, who was driving the car and says he was rammed from behind by another car, told Payá’s daughter and The Washington Post that his trial in Cuba for negligent driving was a sham, his confession coerced.
And the bloggers retweet news of new politically motivated arrests and beatings in Cuba — 504, a record number, in February, according to the Cuban Human Rights and National Reconciliation Commission on the island — evidence that, despite the image Raúl Castro wants to portray of reform, the government crackdown on freedoms remains firm.
They’re clever: They tweet and retweet each other and their cohorts, staying on message and seldom respond to criticism.
“My only commitment is with the freedom of Cuba,” Yoani Sánchez, the best-known blogger, said when asked to define herself in Brazil, where she faced pro-Cuban government mobs from the moment she landed.
Soon after that, she became the target of criticism in the exiled diaspora when she said she was worried that the Cuban government was spending too much money on promoting the freedom of five Cuban spies serving sentences in U.S. prisons.
“Ouch,” a Cuban colleague emailed.
But her commentary, obvious sarcasm to those who follow her closely, was misunderstood.
The war of words against her, however, had been unleashed.
On Facebook, a Cuban-American critic began to take apart Sánchez’s choice of words in Brazil. They were too similar to Cuba’s officialdom speech for her taste — as if the Cuban government has exclusive rights to some verbs in the Spanish language. More criticism followed when Sanchez said she favors lifting the U.S. embargo on Cuba.
No doubt some of the ill will is a side-effect of fame.
Sánchez has written her way to prominence through her sharp Generación Y blog, tweets, books, and column on The Huffington Post. After crossing the Atlantic four times on her Europe-U.S. tour speaking at panels and collecting prizes, she will speak at two forums in Miami on April 1.
The youngest of the roving bloggers, Avila, who is in his 20s, has turned out to be quite a revelation.He became an overnight “dissident” in 2008 when, as a student at the University of Information Sciences in Havana, he publicly asked Ricardo Alarcón, then president of the Cuban Assembly, why Cubans weren’t allowed to travel freely. Alárcon’s ridiculously infantile answer — that there would be too many planes in the sky if everyone were allowed to travel — all but finished his career and turned Avila into a YouTube sensation.
And not long ago, in an interview with Sánchez taped in Havana, Avila unveiled Operation Truth, in which he revealed how the Cuban government uses the university’s computer programs and its students to spy on Internet users.

Every year is a little more decadent than the last. Religiosity in Cuba has become a thing of barbarians, even to the point of a medieval superstition of the masses, repressive and cruel, out of pure fear of death in the midst of the apathy of a claustrophobic and inefficient country where poor animals and the best of human beings pay with their lives (in ritual sacrifices and sneak attacks). 2012 was no exception, rather it was the climax.
The procession of those payers of promises of the last two days to the shrine of El Rincon is a national scandal, a carnival that makes the flesh crawl of anyone who conserves a minimum of intellect and morality (these two utopias that no socialist handbook bothers itself about). With miles around seized by the army and the political police, the remnant of God on this Island, incarnated in the democracidal demagoguery of our Catholic Cardinal, must feel happy attending the apocalypse of a nation. ApoCubalypse.
Ever more misery and materialism to the point of idiocy. People crawling and clawing at their innocent children, as if to assure another half century or another half millennium of horror. Rocks, ropes, bricks, chains, torn sacks as clothing, a rotten stench, peeing in the gutters, trafficking in holy water as if it were a miraculous balm, dim lighting inspired by Dante, people barefoot on a collage of wax and the pandemic of spitters, drunks or raving lunatics or both, cripples and idiots, undoubtedly violent types, tropical theatrics with  attributes worthy of a satanic bible, without clearly remembering who the Lazarus of the crutches might have been and the dogs that never licked his sores as props. Increasingly selling more and more crap, fried pork carcasses and trinkets that rust the next day (today), apocryphal and ecumenical Christmas postcards, cryptocapitalism of the 16th century, all to the beat of the rheumatic rhythm of reggaeton recently prohibited* by an ancestral Revolution.
From the pulpit, scolding and diatribe with a half-smile half-sneer. They dare not reject their muddy faithful, because these are the only days of the Lord when the carnivalesque mob fills the church, but they do warn them they are in mortal sin, one by one, as if it were only a dirty little secret of the confessional (and it is, a people so infantalized that they take refuge in hedonism to flee from History), and not a consequence of living in a wacko nation through decades of stubborn pathetic despotism. We are reminded, of course (and the rotting flowers catalyze the synthesia), of the merciless death that will soon turn the cockroaches to dust (the children chant it with “here comes the Boogeyman and he’s going to eat you up”), and it is this terror, and not faith in the Truth, that rudely pushes the herd to God.
Disgust, vertigo, nausea. I felt the anthropological horror and an immeasurable pity at seeing myself indistinguishable between the Cuban nothing and nobodies there, yesterday.
We already know, language exists because communication is impossible. When the lie replaces the transparency of love, that love doesn’t shine and kill, but is blind and forces a lifelong sterile existence. This I saw, this I lived. The outrageous submission into the hands of a lord more fossil than futile, the nervous glances of those who are hoping to get a family member out of prison to be able to get the fuck out of Cuba, the coarse and invasive laughter before the difference of someone like me still seeming beautiful and free in the midst of the complacency, the walkie-talkies poorly disguised like the hypostasis of a gun to my neck at the zero hour of the debacle (F-Day** or, perhaps, its general rehearsal on Ch-Day**).
Forgive them, Saint Lazarus, because they know very well what they are doing. Cubansummatum est!
Publicado por Unknown en 12/22/2012 05:07:00 p. m. No hay comentarios: