Macleans.ca
OTTAWA – Canada is pulling out of two international programs aimed at ensuring ex-Soviet scientists don’t end up working for terrorist groups.
The programs, one in Moscow and the other in Ukraine, were set up in the early 1990s as a means to give weapons experts a place to work following the collapse of the Soviet Union.
But the work of both centres was given greater heft by G8 nations at the 2002 summit in Alberta, when the international body agreed to spend $20 billion on a ten-year program to combat the spread of weapons of mass destruction.
One of the four key pillars of the so-called global partnership was scientist engagement, via the redirection of former weapons scientists.
Since then, Canada has contributed some $60 million to International Science and Technology Center Moscow and the Science and Technology Center in Ukraine.
The need for the centres has passed, Foreign Affairs Minister John Baird said Tuesday.
“This is an organization which was established as the Cold War was ending to finance support in the former Soviet Union so that senior nuclear experts didn’t go and work in other parts of the world,” Baird said.
“Given we’re some 25 years out from that, the program has largely been successful. Most of the people have retired.”
But a former Canadian ambassador for disarmament questioned why, if that’s the case, Canada appears to be unilaterally abandoning a program that G8 nations championed as recently as the 2011 summit in France.
At that meeting, the G8 agreed to continue funding the global partnership for another 10 years and maintained that the scientist engagement strategy should remain a priority.
“It is a little curious, if that was all restated so recently, that there’s been a decision that this work is now complete and not requiring any further support,” Paul Meyer said.
“You would have thought if there was to be a determination of that nature, that it would be done more collectively by the G8 and other states that have co-operated with the global partnership endeavour.”
Canada is still funding the global partnership; last year, the government announced $367 million over five years aimed at “building on past initiatives to enhance global weapons of mass destruction security.”
“In effect we’re actually spending substantially more than we did when that program was created,” Baird said.
“We’re just focusing it on where the new weapons of mass destruction are.”
In the case of the Moscow centre, its future was placed in doubt two years ago when Russia announced its intention to withdraw.
Many took that as a sign of that program’s eventual collapse, likely by 2015, which is the deadline Russia has placed for the conclusion of research programs taking place in its own country.
Canada’s withdrawal is a logical step, suggested Elena Sokova, the executive director of the Vienna Center for Disarmament and Non-Proliferation.
“It’s winding down,” she said of the Moscow centre.
“And I think the purpose of the centre has been indeed served. I’m not suggesting there aren’t problems to deal with but the instrument of the centre, the way it was established, the way it served needs, the idea is over. It’s time to move on.”
Meyer said that while the Moscow centre’s demise have been hastened by Russia’s withdrawal, there are still programs being undertaken by other countries and offers from them to play host to the facility headquarters.
Meanwhile, there have been no similar signals sent by the Ukrainian government about a desire to shutter the facility there.
It has, however, been struggling with funding shortfalls, in part because two years ago Canada dramatically scaled back funding to its operations, catching it off guard.
That announcement came just after Canada volunteered to help the organization restructure, according to documents posted on the Ukraine centre’s website.
The decision to stop funding the two centres is the latest exit Canada has made from a multilateral organization or treaty that the Conservative government has declared past its best-before-date.
They include a decision to withdraw from a United Nations convention that fights droughts in Africa and elsewhere.
The government said membership was costly and of little benefit to Canadians.
Publicado por Unknown en 5/08/2013 05:56:00 p. m. No hay comentarios:

Uploaded by ToastedMojo on Dec 10, 2010
More than 40 years after his death, the body of former CIA scientist Dr. Frank Olson has been exhumed. Olson's son Eric is convinced his father was murdered by agents of the American government because he wanted to leave the CIA. Dr. Frank Olson was an expert for anthrax and other biological weapons and had top security clearance. Forensic pathologists at George Washington University performed an autopsy and concluded that Olson probably was the victim of a violent crime. A film by Egmont R. Koch and Michael Wech.
Publicado por Unknown en 3/25/2012 12:35:00 a. m. No hay comentarios:

Counting Down to Nuclear War

Every thousand years a doomsday threatens. Early Christians believed the day of judgment was nigh. Medieval millenarians expected the world to end in 1000 A.D. These fatal termini would have required supernatural intervention; in the old days humans lacked sufficient means to destroy themselves. The discovery, in 1938, of how to release nuclear energy changed all that. Humankind acquired the means of its own destruction. Even were we to succeed in eliminating our weapons of doomsday — one subject of “How the End Begins” — we would still know how to build them. From our contemporary double millennium forward, the essential challenge confronting our species will remain how to avoid destroying the human world.

Is it an excuse like what happened with Iraq?


The status of Libya's remaining stockpile of mustard blister agent is a concern in the United States as it watches dictator Muammar Qadhafi try to hold on to power amid growing conflict in his nation, the Wall Street Journal reported today (see GSN, Feb. 23).

(Feb. 24) - Libya's old national flag is raised on top of a police station in the opposition-held city of Tobruk. Libya's mustard blister agent stockpile has been a source of concern amid widespread unrest in the North African nation (Patrick Baz/Getty Images).
Widespread unrest in the North African country continued today, with reports that foreign mercenaries and irregular security forces had mounted several attacks against opposition forces in areas close to the capital city of Tripoli, according to the New York Times. Qadhafi has said he is prepared to die rather than give up power and has urged those loyal to him to strike out against those seeking to topple his decades-old regime.
"When you have a guy who's as irrational as Qadhafi with some serious weapons at his disposal, it's always a concern," an unidentified U.S. official said. "But we haven't yet seen him move to use any kind of mustard gas or chemical weapon" in response to the protests.
Prior to this month's sweeping unrest, Libya had been making progress toward destroying its declared stockpile of chemical weapons. Tripoli has eliminated its arsenal of empty aerial munitions that could have been used to drop warfare materials and has destroyed more than 50 percent of its roughly 25-metric-ton cache of mustard agent, the Organization for the Prohibition of Chemical Weapons said yesterday.
An OPCW spokesman this week said his agency believes Qadhafi years ago gave up the means to deploy his chemical weapons.
Sources in Washington said they are worried about the security of the chemical agents. They also left open the possibility that Qadhafi might try to somehow employ the mustard gas against his opponents.
"Had the destruction process not started, we would be facing a far more dangerous situation," former Bush administration disarmament specialist Paula DeSutter said. "On the other hand, one would certainly feel more secure if all of the mustard gas had been eliminated."
Qadhafi announced in 2003 he was ending his regime's effort to acquire a nuclear weapon capability and other WMD activities. Libya continues to possess outdated Scud B missiles and 1,000 metric tons of yellowcake uranium, according to U.S. officials.
Libya's destruction of its chemical arsenal has lagged as Tripoli and Washington have bickered over foreign financial support for the effort and other details. The North African state was supposed to have destroyed its mustard agent stockpile before 2010 was over but has been given an extension to May 15 (see GSN, Feb. 2).
Media reports on how much blister agent is left differ, with the Journal reporting 9.5 metric tons have yet to be destroyed (Jay Solomon, Wall Street Journal, Feb. 24).
The Washington Times reported that issue experts estimate that Tripoli still holds almost 14 metric tons of mustard agent.
"Obviously, the security of the Libyan stockpile of chemical weapons is a concern," a U.S. intelligence officer said.
"You could see a scenario where Qadhafi takes troops away from these (stockpiles)," a Senate aide tracking events in Libya said. "He could be pulling his security forces off of his missions, and bring them to Tripoli and Benghazi and other towns he needs to secure to hold on to his regime and, as a result, these facilities will be unguarded."
DeSutter speculated that Qadhafi could use the blister agent against protesters even without munitions: "If you want to kill your people, you could pour it out on the street."
There are also concerns that extremists might exploit the security situation in the country and try to misappropriate the mustard gas.
"There are terrorists who may want to get their hands on these weapons, and, given the current state of chaos in the country, we need to be worried these chemical agents could fall into the wrong hands," Foreign Policy Initiative Executive Director Jamie Fly said (Eli Lake, Washington Times, Feb. 23).
Publicado por Unknown en 2/24/2011 02:23:00 p. m. No hay comentarios: 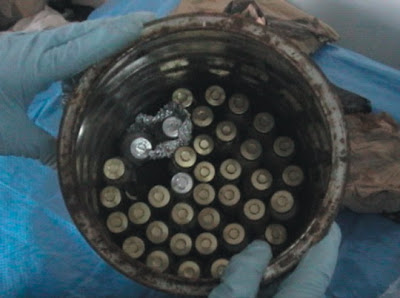