How a Model gets Photoshop overhaul Metrosexuals are becoming more common among the urban middle class in Cuba.
IPS
HAVANA. Jul 14 2013 (IPS) - More and more young men in Cuba are moving away from the traditional masculine aesthetic and are spending hours in front of the mirror or at the gym. But they are not any less “machista” in behaviour, according to specialists meeting in the capital.
“All over Cuba we see young men who pluck their eyebrows and dye their hair, while within they keep repeating the traditional machista model unthinkingly,” psychologist Airelav Pérez, of the “Efraín Benítez Popa” medical school in the eastern city of Bayamo, told IPS.
Pérez and her team this year used the Community Corrective Processes methodology (ProCC) — created by Argentine psychologist Mirtha Cucco about 40 years ago — with a group of 27 medical students to learn more about this kind of behaviour.
“It was a very small study, but we thought it was significant that the child-raising criteria used with these students continued to reinforce the hegemonic model of masculinity, which they repeat even though they break with traditional aesthetics associated with men,” she said.
In her opinion, “it seems like the traditional pattern does not completely meet the needs of young people today, which is why they are paying more attention to their bodies and their appearance, hygiene and beauty, something that wasn’t so important before.”
She added that “at least something is changing.
“Most of them said that they were doing that (engaging in the tendency known internationally as metrosexual) so that girls would like them, or to follow the fashions that are set by artists and athletes,” said Karelia Fernández, another of the study’s authors. Their research investigated whether the new masculine image was accompanied by inner change among these young people.
“They even said the grooming they did was not one of the things required of a man, but that it was comfortable for them,” she added, describing the findings of their work, which were presented at a Jul. 4-6 workshop called “Jornadas 2013, Gender Issues: the ProCC Contribution”.
The workshop, where researchers presented their findings on masculinity issues using the ProCC methodology, emerged from cooperation between Cuba’s National Centre for Sex Education (CENESX) and the Madrid-based “Marie Langer” International Community Health Centre.
Professionals and institutions use the ProCC community work and research method, present in Cuba for the last 25 years, with the goal of “creating spaces for reflection where people can learn, interact and obtain elements of analysis for finding solutions together as a group for their problems,” said Cucco, the methodology’s creator.
“A lot of things make people uncomfortable, but they don’t question or analyse them because they consider them to be normal,” said Cucco, in an exclusive interview with IPS. That is why she and her colleagues created a method for using in communities that are trying to improve health and quality of life, she said.
Schools for fathers and mothers and spaces for adolescents, older adults and professionals, among others, have been created with their own unique characteristics, especially in Spain, Cuba and Argentina, where ProCC has the most followers. They have also been set up in Bolivia, Brazil, Colombia, Mexico, Peru and Venezuela, Cucco said.
This year’s “Jornadas” event, which attracted participants from various Latin American countries as well as Spain, focused on masculinity issues, “a question that has been made invisible,” Cucco said.
In recent years, so-called masculinity studies have flourished in Cuba, and are increasingly gaining the interest of researchers and activists. However, the main challenge is for men to question the different nuances of “machismo” and join in the emancipation achieved by women.
Cuban women have high levels of education, are a major part of the technical workforce, and make up 48.9 percent of the single-chamber legislature, along with other achievements that one way or another have caused changes among men.
However, men need to question themselves, the experts say.
“Young people do not have that system of interests. Some concerns in that respect appear sometimes when they get married, become parents, or start working,” said psychiatrist Armando Guzmán of the Community Mental Health Centre in the Havana municipality of Arroyo Naranjo.
Guzmán uses ProCC in services related to problems of drug addiction, domestic and workplace conflicts, violence, and parent/child relationships, among others.
Alejandro Céspedes, an academic researcher who has focused on masculinity issues, agrees with the Bayamo team’s findings.
“Metrosexualism is a fashion that has taken hold among young people in Cuba, chiefly university students. But in essence, it does not differ from the patriarchal model,” Céspedes said in a conversation with IPS.
The term metrosexual was coined in 1994 by British journalist Mark Simpson to describe urban males in Europe who were meticulous with their grooming and appearance, using creams and other cosmetics, and often removing their body hair. In the late 1990s, young men in Cuban cities began to follow the fashion.
“Now it is normal and more widespread, but this fashion does not define the way a person is, or his sexual orientation,” agronomy technician Héctor Montiel told IPS. This 19-year-old Havana resident, who plucks his eyebrows and shaves his legs, says that “Cuban men are less machista than they used to be.”
Céspedes clarified that the metrosexual tendency was mainly seen among the better-off in Cuba, where a deep economic crisis has dragged on for more than two decades.
He is part of the Ibero-American and African Masculinities Network, a pioneer in Cuba in this type of research and in organising meetings among men from different backgrounds to discuss, raise awareness, and reflect on the need for new ways of being male.
Publicado por Unknown en 7/14/2013 03:21:00 p. m. No hay comentarios: Enlaces a esta entrada

If you were watching the Oscars last night you may have had your attention diverted from Anne Hathaway's face in favor of her dress.
From a mile away, it looked like you could see through the top of Hathaway's pale pink Prada gown.
The two big seams in the dress acting like arrows didn't help either.
Considering Oscar outfits are often planned out far in advance, wouldn't someone have caught this fashion faux pas ahead of time?
Maybe not.
On the red carpet, Hathaway divulged that she decided three hours before the Oscars to go with the Prada dress instead of a pre-planned Valentino.
And, this was after Valentino sent out a press release announcing Hathaway would be wearing one of its couture gowns.
It all boils down to a last minute decision. The 20 Wealthiest Supermodels On The Planet

Kathy Ireland tops the list of the richest models in the world with nearly 40 television and movie appearances, dozens of commercials, and a billion dollar empire.
Ads: Caress soap, Fruit of the Loom, Budweiser, Cheerios, and Baked Lay's commercials, designs clothing for Kmart,
Magazine Covers: Vogue, Cosmo, Sports Illustrated.
Film / TV:
Other: Designs wedding dresses and jewelry, written six books including best-selling "Powerful Inspirations: Eight Lessons That Will Change Your Life," has her own fitness video, "Kathy Ireland's Total Fitness Workout," came out with her own calendar in 1993. Her empire, KIWW sells more product than Martha Stewart. 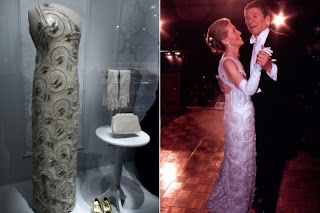 A new exhibition drawing from the First Ladies Collection at the National Museum of American History in Washington, D.C., includes one painted paper fan, a wowzer of a silver tea service, one well-worn silk shoe, a lump of charred wood, a wealth of china, and one sweetly autographed copy of Treasure Island—in addition to the beloved inaugural ballgowns, cocktail dresses, and day suits that typically leave visitors swooning.

The collection, one of the most popular exhibitions at the Smithsonian, has been re-examined and re-configured in a new East Wing gallery space in anticipation of a major renovation that will close the museum’s West Wing. This more intimate look at the first ladies—or at least their accoutrement—opens to the public Nov. 19.More >
Publicado por Unknown en 11/19/2011 04:09:00 p. m. No hay comentarios: Enlaces a esta entrada