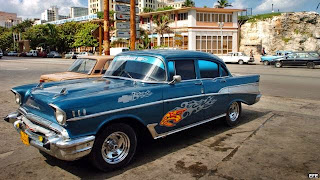 In Cuba's sea of classic cars, the truly valuable are elusive Despite it being 2014, classic cars from before the 1960’s, particularly American cars, are still commonplace on the streets of Cuba meaning the small island provides a glimpse into the history of motoring. One a recent trip to Cuba, photographer Piotr Degler heard whispers that there was a rare Mercedes-Benz 300SL Gullwing sitting abandoned somewhere on the island.
For one month, Degler roamed the streets of Cuba on lookout for the abandoned Gullwing and rather mysteriously, no locals knew where the car was. After searching high and low however, Degler stumbled on the carcass of the Mercedes-Benz 300SL being sheltered by a banana tree.
When discussing the unique find with Classic Driver, Degler said, “I found many hidden treasures on my travels across Cuba – a Hispano-Suiza being one – but the Gullwing eluded me until a few days before my planned departure.
“When I first found it, I spent the whole day taking pictures, but then I realised a night shoot might be more appropriate. Finding the car was an indescribable experience,” he said.
Publicado por Unknown en 12/14/2014 06:11:00 p. m. No hay comentarios: Enlaces a esta entrada

By Claudine Zap | The Lookout

A collector of vintage photography equipment got an extra bonus when he picked up a French camera at an antique store: never-before-seen images circa World War I France.
Anton Orlov details the story of the lucky find on his blog the Photo Palace, where all of the eight photos from the Jumelle Belllieni stereoscopic camera can be seen.
Orlov writes in his blog that he came across the images completely by accident, as he was cleaning the recently purchased camera. He opened up the film chamber and found the negatives on a stack of glass plates.
He writes, “While viewing the images in their negative form it was difficult to say for sure what was on each of them, but after scanning them it became clear that they dated back to the First World War and were taken somewhere in France. Adding, “I absolutely love finding images that likely have never been seen by anyone in the world.”
The photography enthusiast tells Yahoo News by email, “I was very surprised when I found them. “ He noted that while he had found “plenty of undeveloped” film in old cameras before, he explained, “those are indeed ruined when exposed to light, and even if I try developing them it would be a very slim chance of getting anything usable from them.”
The black-and-white photos were taken in France, and document some of the destruction of the countryside. The images seem to be perfectly preserved, except for a couple that are marred by streaks of light.
Two of the photos seen here show the remains of the war: Two soldiers stand next to a big bomb. Another shows two men on horseback surveying the remains of a crashed airplane.
The remaining photos on Orlov’s website include train tracks that have been destroyed, an aerial view of a town showing the wear of the war. And a house that has been bombarded and fallen into a river.
Publicado por Unknown en 1/11/2013 11:05:00 a. m. No hay comentarios: Enlaces a esta entrada

CBS 5 - KPHO
The Sideshow/ By Claudine Zap
A $5 garage-sale find turned out to contain a hidden treasure worth thousands. Here's what happened.
Pam Dwyer of Glendale, Ariz., picked up a picture of a horse at a garage sale in Sun City. Dwyer's husband had a hunch they were getting something more. Dwyer told CBS 5, "He says, 'I just have this gut feeling that there's something behind that.'"
There was. An amazingly detailed and deftly drawn original portrait of John F. Kennedy, signed and dated from 1961.
The story gets odder. Dwyer did some research on the artist. Carmelo Soraci, she learned, was an infamous forger who did time for passing false checks, spending 21 years locked up in Dannemora Prison in New York, where he turned to a creative outlet of stained-glass making, which he discovered while "in college" inside.
The former forger redeemed himself by eventually building and installing stained-glass windows in the chapel at the prison, and was asked to do the same at Sing Sing Prison. He also apparently drew.
Dwyer took the portrait to an appraiser, who valued the piece at $2,500 to $5,000. "I'm happy with how much she was impressed by it," Dwyer said.
Dwyer added she would probably sell it—we're guessing not at a garage sale.
Publicado por Unknown en 11/27/2012 05:28:00 p. m. No hay comentarios: Enlaces a esta entrada 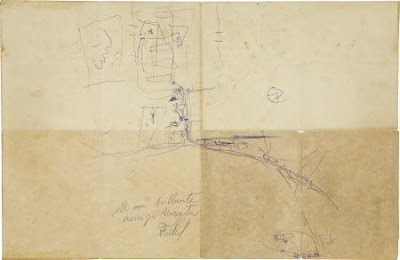