The body of a Cuban man who drowned off the coast of Grand Cayman in early January has been kept at the local morgue for two-and-a-half months while negotiations stalled over how his remains might be sent home.
Manuel Ramon Mariño-Vasquez, 51, was one of four Cuban migrants spotted in a makeshift 18-foot boat off Cayman Brac on Jan. 2. The men were escorted offshore by a Marine Unit patrol in the Brac and turned up in East End amid rough seas the next morning. Police said the Royal Cayman Islands Police Service helicopter spotted the migrants around 11 a.m. on Jan. 3 and that they had indicated “they were not in distress.”
By sunset on Jan. 3, Mr. Mariño-Vasquez had died off South Sound, apparently by drowning. The three other Cuban men were rescued by surfers near Sand Quay after their craft capsized.
Local police conducted an investigation, which has since been completed. The three survivors were repatriated to Cuba a few weeks ago, but the dead boater’s body was not sent home.
Mr. Mariño-Vasquez was not initially known to the local Cuban community in Cayman, and local pastor Andres Ramos only learned the man’s name because one of his fellow migrants had written it in a page of his Bible and given the book to Mr. Ramos.
Since then, Mr. Ramos’s wife Annie said, Mr. Mariño-Vasquez’s family in Miami and Cuba have made contact, pleading with the Cayman Islands government and anyone else who might help them to return the migrant’s body to Cuba.
Another local pastor, Helbert Rodriquez of the Cayman Baptist Church, said a church volunteer went to see whether Mr. Mariño-Vasquez’s body was still in the morgue about two weeks ago and confirmed it was still there. He has remained in contact with the family since then.
“The family has been calling from Cuba and Miami, asking me if I can help,” said Pastor Rodriguez. “They don’t want him to be buried here.”
The issue was money. Pastor Ramos said they were told it would cost $5,000 to send Mr. Mariño-Vasquez’s body back home. Local churches started up a collection about two weeks ago to try to raise the money for the man’s family.
At one stage, Pastor Rodriguez said, the government told a church representative that the migrant boater would be buried in Cayman. “The Cayman government said that since there’s nobody moving nothing, they will bury the body in Cayman. The family says please, don’t make this happen.’”
The repatriation of living Cuban migrants is a lengthy and costly task for the Cayman Islands government. Earlier this month, Ministry of Home Affairs Deputy Chief Officer Wesley Howell revealed that the government had spent nearly $1.6 million in 2014 on the detention, housing and repatriation of migrant boaters that arrive illegally on Cayman’s shores.
That cost is far beyond anything the local government has spent in recent years, due mostly to a large increase in the number of migrants coming to Cayman and partly due to security improvements made last year at the Immigration Department’s detention center for migrants in George Town.
Returning the bodies of migrant boaters to their families in Cuba is not an issue the Cayman Islands has been required to deal with very often, if at all.
In this case, the Ministry of Home Affairs has agreed to pay the full cost for returning Mr. Mariño-Vasquez’s body to Cuba, Mr. Howell said. However, the government was still trying to work out the logistics of when and how that would be done, he said. It was hoped the body could be returned sometime next week.
The number of Cuban migrants in 2015 seems on course to exceed the arrivals in previous years, with more than 115 having been spotted off the coast of Cayman Brac or Grand Cayman since January. That includes a group of 37 migrants who landed in Cayman Brac last Friday. They were flown to Grand Cayman, where they are housed in the Immigration Detention Centre awaiting repatriation. In 2014, a total of 143 Cuban migrant boaters arrived in Grand Cayman all year.
Publicado por Unknown en 3/19/2015 03:54:00 p. m. No hay comentarios: Enlaces a esta entrada 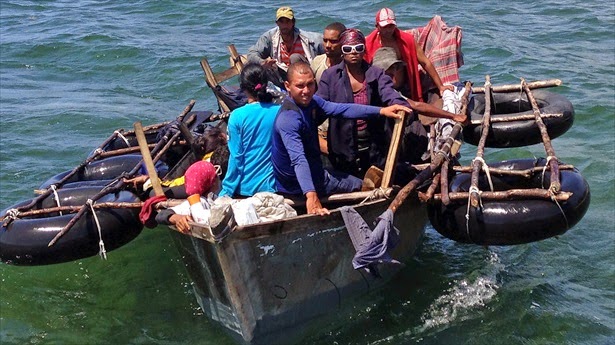 By Peter Polack
GEORGE TOWN Cayman Islands (Reuters) – Sixteen Cuban migrants who sought refuge in Grand Cayman have resumed their voyage in a small, homemade aluminum boat after local officials turned them away, citing a migration agreement with Cuba.
The 20-foot (6-meter) boat, a patchwork of fiberglass and metal with large inner tubes attached to makeshift outriggers, left on Thursday night, headed for Honduras, about 400 miles (644 km) away.
They were last seen being trailed by a police boat and helicopter about 5 miles (8 km) off Grand Cayman, drifting west in 5-foot (1.5-meter) waves with a squall approaching.
“I am praying as hard as I can,” said the anxious mother of a 23-year-old passenger, who was interviewed by phone in Texas and asked to be identified only by her first name, Marlenis, because the group left Cuba illegally on a boat built in secret.
Most of the passengers, 11 men and five women aged 18 to 40, are from her barrio in the town of Manzanillo in eastern Cuba, she said. “Life is very difficult there. They have no jobs, no opportunity, no future at all,” she added.
Boats smuggling Cubans who are seeking to flee the communist-run island are frequently seen off the Cayman Islands, located in the Caribbean less than 100 miles (160 km) south of Cuba.
They head for Honduras from where migrants make the long journey overland to reach the U.S. border with Mexico. Under the U.S. so-called “wet foot, dry foot policy,” Cuban migrants who make it onto United States soil are allowed to remain while those intercepted at sea are turned back.
Marlenis, 42, said she left Cuba by boat six years ago taking the same route via the Cayman Islands.
“It was a very tough journey, five storms, lots of rain, drifting, almost lost. I don’t like to remember it,” she recalled. “It took us 11 days in total but the hardest part was the last two days on the open sea from Grand Cayman to Honduras,” she added.
The U.S. Border Patrol said in late July that more than 13,500 Cubans without proper travel documents had tried to cross the southwestern U.S. border since Oct. 1, 2013, more than during all of the previous 12 months. Four years ago, the 12-month total was about 5,500.
Cayman immigration officials estimate about 244 Cuban migrants have passed through its waters so far in 2014, while 76 were repatriated.
Under a 1999 migration accord with Havana, Cuban boats are allowed to pass through Cayman waters as long as they do not seek any assistance. If the migrants come ashore, they are taken into custody and usually repatriated to Cuba.
(Editing by David Adams, Ken Wills and Lisa Shumaker)
[Image: A home-made aluminum boat carrying 16 Cuban migrants pulls up to a dock seeking what the migrants said was refuge from rough seas, in Grand Cayman island on Aug. 28, 2014. By Peter Polack for Reuters]

This picture of Cuban migrants near Cayman Brac in 2013 is an example of the makeshift watercraft used in attempts to reach the U.S. via a circuitous route through the Caribbean and Central America. – Photo: Ed Beaty
Thirty-two Cuban migrants were sent home from Grand Cayman over the past two weeks after having landed in the Cayman Islands illegally.
However, nearly as many remain in George Town’s Immigration Detention Centre awaiting the outcome of Cuban and local officials’ processing of their repatriation cases. Dozens of the detainees have gone on the run in recent weeks, although all but one has been recaptured.
“It’s just a constant flow of migrants leaving that country,” Deputy Chief Immigration Officer Gary Wong said Wednesday. “There’s no particular reason for so many coming at one time, they’re all just looking for a better way of life.”
The Cubans’ quest for better fortunes has cost the Cayman Islands government hundreds of thousands of dollars in past budget years for housing and care while they await – sometimes for months – the outcome of asylum requests or simply to be sent back home.
The wait for repatriation led to the latest round of escapes from the low-security detention center in the Fairbanks area of George Town, according to Mr. Wong.
“The last few escapes that we’ve been having is because the migrants have said Cuba is taking too long to accept them back,” he said. “So they think they will put pressure [on Cuba] and us [by escaping]. But you and I both know that’s not going to happen.”
More likely, the Cuban government won’t even hear about the escape attempts, Mr. Wong said, and in the meantime, the Cayman Islands community could be put at risk.
Escapes from the migrant center are often viewed in a laissez faire manner by the Cayman community as the Cubans are usually economic migrants and not perceived as a threat.
“[Residents] should think about it more seriously than that,” Mr. Wong said. “We don’t know who they are. We don’t know their background. We don’t know what kind of threats they would pose to the people out there.
“Most of the males who come here have some sort of military training background ... that could be dangerous to the average person.”
A number of escapes from the detention center have been reported since the beginning of 2014. They include:
Jan. 20: A lone migrant fled the center around midday and came back of his own accord that evening.
March 11: Three migrants who had been rescued in the water by a cruise ship that later docked in Grand Cayman fled the detention center and were arrested later that day.
March 17: More than two dozen Cubans ran from the center in the middle of the afternoon. All but one were picked up immediately by police and immigration enforcement officials.
March 19: Three migrants escaped from the detention center around 5 p.m. They were not immediately located, but all were eventually rounded up.
April 16: Thirteen migrants ran from detention in the afternoon; 10 were recaptured immediately.
Of all the recent escapes, only one migrant has managed to elude immigration officers and the local police. Mr. Wong said it is suspected that the escapee, Yasmany Gonzalez Rodriguez, is being harbored locally, which is a crime.
The Cayman Islands government communicates with the Cuban government via the British Embassy there, but immigration officials often find it difficult and time-consuming to obtain reliable information about the migrants, who often give false names and do not carry identification.
Also, the men and women who arrive illegally from Cuba could be desperate to avoid returning home.
“Most of the vessels [used by the migrants] are basically homemade,” Mr. Wong said. “They’re actually built in bushes close to the beach and then pushed into the water.
“Once you leave [Cuba] illegally by that kind of means, Cuba does look at them as basically traitors to their cause.”
The migrants are allowed under United Nations conventions to make application for political asylum in the Cayman Islands. However, most do not qualify for that status.