Bradley Manning: I want to live as a woman

Security Clearance
By Paul Courson
For leaking hundreds of thousands of classified documents, Bradley Manning is set to spend the next three decades in prison.
A military judge on Wednesday sentenced Manning to 35 years in prison - less than the 60 years prosecutors sought, as well as the 90 years he could have received.
The former Army intelligence analyst - convicted in July of stealing 750,000 pages of classified documents and videos and disseminating them to WikiLeaks - will be credited for the roughly three and a half years he's already served in detention.
The judge, Army Col. Denise Lind, also reduced his rank from private first class to private, and ordered him to be dishonorably discharged. Manning also will forfeit pay and benefits.
FULL STORY >>
Publicado por Unknown en 8/21/2013 11:59:00 a. m. No hay comentarios: Enlaces a esta entrada

Bradley Manning found not guilty of aiding the enemy

An Army judge on Tuesday acquitted Pfc. Bradley Manning of aiding the enemy by disclosing a trove of secret U.S. government documents, a striking rebuke to military prosecutors who argued that the largest leak in U.S. history had assisted al-Qaeda.

The judge, Col. Denise Lind, found Manning guilty of most of the more than 20 crimes he was charged with. She also acquitted him of one count of the espionage act that stemmed from his leak of a video that depicted a fatal U.S. military airstrike in Farah, Afghanistan.
Use facts in the debate of NSA surveillance, not the fear of what might happen.

The eight-week trial offered a gripping account of Manning’s transformation from a shy soldier who deployed to Baghdad as an intelligence analyst in 2009 to a mole for the anti-secrecy group WikiLeaks, which disclosed more than 700,000 documents Manning gathered.
Had Manning been convicted of aiding the enemy, Manning would have faced a life sentence in prison without the possibility of parole. Civil libertarians saw the prospect of a conviction on that charge, which has not been used since the Civil War, as a dangerous precedent that could have would have sent an unmistakable message to would-be government whistle-blowers.
“The heart of this matter is the level of culpability,” said retired Air Force Col. Morris Davis, a former chief prosecutor at the U.S. military prison in Guantanamo Bay, Cuba. He noted that Manning has already pled guilty to some charges and admitted leaking secret documents that he felt exposed wartime misdeeds. “Beyond that is government overreach.”
If found guilty of all charges, including aiding the enemy, Manning would face a sentence of life in prison without the possibility of parole.
The planned announcement of the verdict follows an eight-week trial at Fort Meade in Maryland, where military prosecutors argued that Manning, 25, betrayed his oath and his country, and assisted al-Qaeda because the terrorist group was able to access secret material once WikiLeaks posted it.
Hours before the verdict, about two dozen Manning supporters demonstrated outside Fort Meade wearing “truth” T-shirts and waving signs proclaiming their admiration for the former intelligence analyst, the Associated Press reported.
“He wasn’t trying to aid the enemy,” said Barbara Bridges, 43, of Baltimore. “He was trying to give people the information they need so they can hold their government accountable.”
As dozens of journalists were admitted to the installation amid tight security, dogs trained to sniff out explosives searched their vehicles before they were escorted to a media room where the court proceedings were to be broadcast live on a screen.
The government’s pursuit of the charge of aiding the enemy under a theory that had not been used since the Civil War troubled civil libertarians and press-freedom advocates. They said the publication of secret defense information online could expose any leaker to life in prison and will chill press scrutiny of the military.
The government relied on a case from the Civil War to bring the charge: In that trial, a Union Army private, Henry Vanderwater, was found guilty of aiding the enemy when he leaked a Union roster to an Alexandria newspaper. Vanderwater received a sentence of three months hard labor and was dishonorably discharged.
Keep reading on The Washington Post >>
Publicado por Unknown en 7/30/2013 01:36:00 p. m. No hay comentarios: Enlaces a esta entrada

A tale of two Mannings: Was WikiLeaker naive or arrogant?

Army Pfc. Bradley Manning, center, is escorted into a courthouse at Fort Meade, Md., for a pretrial hearing in May.
By Courtney Kube and Erin McClam, NBC News
Pfc. Bradley Manning was young and naïve but "hoping to make the world a better place" when he leaked military secrets, his lawyer said Monday on the first day of his court-martial.
Manning selected information that he believed the public should see but that could not be used against the United States, said the lawyer, David Coombs.
“He was 22 years old,” Coombs said. “He was young. A little naïve, but good-intentioned in that he was selecting information that he thought would make a difference.”
It was one of two portraits offered as a judge heard opening statements in the trial of Manning, charged with violating the Espionage Act and helping the enemy when he carried out the largest leak of classified information in American history.
Earlier in the day, a military prosecutor said that Manning craved notoriety and put his fellow soldiers at risk when he leaked the information — some of which, he said, was later found during the raid that killed Osama bin Laden.
The prosecutor, Army Capt. Joe Morrow, said his side would prove that Manning knew what he was doing when he put the information “in the hands of the enemy.” He described the case as what happens when “arrogance meets access to sensitive information.”
Morrow, the prosecutor, began his presentation to the military judge by quoting something he said Manning wrote in a chat room in May 2010: “If you had unprecedented access to classified networks 14 hours a day 7 days a week for 8+ months, what would you do?”
Morrow displayed a log from Manning’s personal computer showing that he downloaded a database with the personal information of every service member in Iraq — more than 74,000 men and women in all.
The prosecutor said that by leaking the information, Manning was providing foreign intelligence services with a phone book.
Manning, 25, has said that he sent the information, which included diplomatic cables and battlefield reports, to the anti-secrecy website WikiLeaks because he was disillusioned by a U.S. foreign policy bent on “killing and capturing people.”
He has pleaded guilty to 10 charges that carry up to 20 years in prison, but prosecutors are pushing ahead with more serious counts, including larceny, aiding the enemy and violating the Espionage Act. Those charges could land Manning in jail for life.
Manning has been jailed at Fort Leavenworth, Kan., since April 2011 and was at the military prison in Quantico, Va., for nine months before that.
Coombs, the defense lawyer, spoke of a formative event in Iraq on Christmas Eve 2009, when an explosive projectile narrowly missed an American convoy but struck a car with an Iraqi family inside.
Manning could not forget about the civilians hurt and killed in the attack and “started to struggle,” Coombs said. He said Manning then decided he needed to do something to make a difference in the world.
Coombs said that Manning arrived in Iraq when he was “22 years young” and hoping to make Iraq a safer place.
“He is not the typical soldier,” the lawyer said. He said that Manning deployed to Iraq with custom dog tags that said “humanist” on the back. FORT MEADE, Md. – A military judge on Thursday accepted guilty pleas by  Army Pfc. Bradley Manning to 10 lesser charges against him, leaving the ex-intelligence analyst to face 12 other counts for allegedly leaking hundreds of thousands of government documents to the WikiLeaks website.
The acceptance of the "naked guilty pleas" -- meaning there is no agreement between the government and the defense that would limit the sentence – at a pre-trial hearing means that Manning faces up to 20 years in prison, even if he is ultimately acquitted of the most-serious charges against him.
Col. Denise Lind, the military judge presiding over the case, also accepted Manning’s “not guilty” pleas to the remaining charges, including "aiding the enemy." His court martial on those charges, which carry a maximum sentence of life in prison, is scheduled to begin on June 3.
During the day-long pre-trial hearing, Manning acknowledged that his actions were a discredit to the service and that he knew WikiLeaks was not authorized to have the information he provided.
At one point when Lind asked him whether he knew what he was doing was wrong, he answered simply, "Yes, your honor."
More than an hour of Thursday's hearing was consumed by Manning's composed reading of a 35-page prepared statement that offered his first public explanation of his motives for leaking the government documents to WikiLeaks. He said he did so to “spark domestic debate” on foreign policy and the wars in Iraq and Afghanistan.
Manning painted himself as a young man with an "insatiable thirst for geopolitical information" and a desire for the world to know the truth about what was happening in Iraq and Afghanistan. But he said he became increasingly disillusioned after being sent to Iraq by actions that "didn't seem characteristic" of the U.S., the leader of free world.
Manning said under oath that the first documents he sent to WikiLeaks in early 2012 were the combined information data network exchanges for Iraq and Afghanistan, which he described as the daily journals of the "on-the-ground reality" of the conflicts in Iran and Afghanistan.
He said he sent the information while on leave and staying at his aunt's house in Potomac, Md., using a public computer at a Barnes & Noble store in Rockville or North Bethesda. He said included a brief note calling the information the most significant documents of our time, and closing with, "Have a good day."
He said he tried to send the information to the Washington Post and the New York Times before turning to WikiLeaks.  He said he later sent information to WikiLeaks eight other times from his personal laptop at Contingency Base Hammer in Iraq.
Manning is facing 22 criminal charges that include "aiding the enemy" and could face a life sentence if convicted of the most serious charges.
Manning said he decided to release the first batch information because he was depressed and frustrated, and felt "a sense of relief" when he returned to Iraq. He said he finally had a "clear conscience" because someone else knew what was happening.
More on usnews >>
Publicado por Unknown en 3/01/2013 08:57:00 a. m. No hay comentarios: Enlaces a esta entrada

Bradley Manning appears in US court

Uploaded by AlJazeeraEnglish
Bradley Manning, the US soldier accused of giving massive troves of classified US documents to WikiLeaks, has appeared in a military court for the first time at a pre-trial hearing into his case.
Publicado por Unknown en 12/17/2011 01:04:00 p. m. No hay comentarios: Enlaces a esta entrada 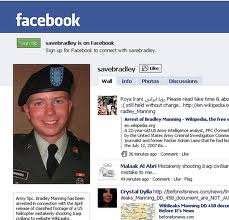