Would huge Nicaragua canal be win for China? worldnews
Inti Ocon via AFP - Getty Images
Nicaraguan President Daniel Ortega (R) and his Venezuelan counterpart Nicolas Maduro are seen standing in front of a picture of late Venezuelan President Hugo Chavez, during a Petrocaribe summit in Managua on June 29, 2013.
By Luis Manuel Galeno, Reuters
The presidents of Venezuela and Nicaragua offered Friday to grant asylum to NSA leaker Edward Snowden, one day after leftist South American leaders gathered to denounce the rerouting of Bolivian President Evo Morales' plane over Europe amid reports that the American was aboard.
Nicolas Maduro of Venezuela and Daniel Ortega of Nicaragua made their offers during separate speeches in their home countries Friday afternoon. Snowden has asked for asylum in numerous countries, including Nicaragua and Venezuela.
"As head of state, the government of the Bolivarian Republic of Venezuela decided to offer humanitarian asylum to the young American Edward Snowden so that he can live (without) ... persecution from the empire," Maduro said, referring to the United States. He made the offer during a speech marking the anniversary of Venezuela's independence. It was not immediately clear if there were any conditions to Venezuela's offer.
In Nicaragua, Ortega said he was willing to make the same offer "if circumstances allow it." Ortega didn't say what the right circumstances would be when he spoke during a speech in Managua.
He said the Nicaraguan embassy in Moscow received Snowden's application for asylum and that it is studying the request.
"We have the sovereign right to help a person who felt remorse after finding out how the United States was using technology to spy on the whole world, and especially its European allies," Ortega said.
The offers came following a flap about the rerouting of Bolivian President Evo Morales' plane in Europe earlier this week amid reports that Snowden might have been aboard.
Spain on Friday said it had been warned along with other European countries that Snowden, a former U.S. intelligence worker, was aboard the Bolivian presidential plane, an acknowledgement that the manhunt for the fugitive leaker had something to do with the plane's unexpected diversion to Austria.
It is unclear whether the United States, which has told its European allies that it wants Snowden back, warned Madrid about the Bolivian president's plane. U.S. officials will not detail their conversations with European countries, except to say that they have stated the U.S.'s general position that it wants Snowden back.
President Barack Obama has publicly displayed a relaxed attitude toward Snowden's movements, saying last month that he wouldn't be "scrambling jets to get a 29-year-old hacker."
But the drama surrounding the flight of Morales, whose plane was abruptly rerouted to Vienna after apparently being denied permission to fly over France, suggests that pressure is being applied behind the scenes.
Spanish Foreign Minister Jose Manuel Garcia-Margallo told Spanish National Television that "they told us that the information was clear, that he was inside."
He did not identify who "they" were and declined to say whether he had been in contact with the U.S. But he said that European countries' decisions were based on the tip. France has since sent a letter of apology to the Bolivian government.
Meanwhile, secret-spilling website WikiLeaks said that Snowden, who is still believed to be stuck in a Moscow airport's transit area, had put in asylum applications to six new countries. He had already sought asylum from more than 20 countries, many of which turned him down.
Wikileaks said in a message posted to Twitter on Friday that it wouldn't be identifying the countries involved "due to attempted U.S. interference."
Icelandic lawmakers introduced a proposal in Parliament on Thursday to grant immediate citizenship to Snowden, but the idea received minimal support.
Publicado por Unknown en 7/05/2013 09:47:00 p. m. No hay comentarios: Enlaces a esta entrada

by Chris Simmons
Source:  Havana Times
Last week, the president of the Council of Churches of Cuba, Joel Ortega, participated in a dialogue with religious leaders, academics and social activists at Nicaragua’s Universidad Evangelica Martin Luther King, reported the Prensa Latina news agency.
Cuban Ambassador Eduardo Martinez Borbonet described the Nicaraguan evangelical churches as playing an “active” role in the solidarity movement with the island.  The meeting was also attended by Nicaraguan pastor Sixto Ulloa, who is the human rights ombudsman; and Freddy Franco, the national coordinator of the solidarity with Cuba movement there.
Editor’s Note:  In December 1998, First Secretary Eduardo Martinez Borbonet,  Third Secretary Roberto Azanza Paez and Attaché Gonzalo Fernandez Garay were expelled from the United States for their role as “Wasp Network” Case Officers.   All three Directorate of Intelligence (DI) officers had been serving under diplomatic cover at the Cuban Mission to the United Nations (CMUN).
Publicado por Unknown en 8/27/2012 01:26:00 p. m. No hay comentarios: Enlaces a esta entrada

Migration in the Americas: US retirees flock to Nicaragua

Cuba Confidential/
June 25, 1992:  Lieutenant Colonel Renan Montero Corrales [aka Andres Barahona Lopez], a member of the America Department (DA), left Nicaragua on the last “official” Cubana Airlines flight out of Nicaragua.
Montero was posted to Nicaragua in 1979 to lead the Fifth Directorate (aka Directorate V or VDIR) of the Sandinista’s General Directorate of State Security (DGSE).  Under Montero, the VDIR conducted Nicaragua’s foreign intelligence activities, influence operations, and monitored Managua’s overseas diplomats.  It had a staff of approximately 300-400 personnel.
Interior Minister Tomas Borge and Nicaraguan President Daniel Ortega both acknowledged that Montero headed the VDIR and worked under the direction of Borge and his deputy, Lenin Cerna.  In addition to his foreign intelligence responsibilities, a Spanish newspaper cited Montero as the Cuban ‘in charge of organizing the Sandinistas’ counterespionage unit.”  A declassified US intelligence report characterized him as “a legend among Cubans and Nicaraguans for his intelligence exploits.”
For his participation in the Nicaraguan Revolution, the Sandinistas awarded Montero the rank of Comandante in 1980. It is not clear whether this award was for his service from 1979-1980 or for some unidentified earlier period. Promoted to brigade commander in 1985, he fell ill three years later and was replaced by Comandante Jacinto Suarez-Espinosa. In 1989, Montero became the assistant to Defense Minister Humberto Ortega.
According to Sandinista defector Miguel Bolanos, Montero began working with the Sandinistas in the late 1960s.
Montero served as a consular officer in San Jose during the 1970s.  One of his duties was liaison with Sandinista military forces operating out of northern Costa Rica
During the mid-1960s, Montero operated in Bolivia, where he supported members of Che Guevara’s guerrilla column as they arrived.  There he served as the liaison between Havana and Guevara.
Note:  The “America Department (DA)” was the name used by the intelligence wing of the Central Committee of the Cuban Communist Party from 1974 to the late 1980s or early 1990s. The DA was heavily involved in supporting revolutionaries and terrorists, but has since become more focused on political intelligence operations. This service is now called the America Area of the International Department of the Cuban Communist Party (PCC/ID/AA).
Publicado por Unknown en 6/25/2012 03:09:00 p. m. No hay comentarios: Enlaces a esta entrada

A mysterious epidemic is devastating the Pacific coast of Central America, killing more than 24,000 people in El Salvador and Nicaragua since 2000 and striking thousands of others with chronic kidney disease at rates unseen virtually anywhere else. Scientists say they have received reports of the phenomenon as far north as southern Mexico and as far south as Panama.
Last year it reached the point where El Salvador's health minister, Dr. Maria Isabel Rodriguez, appealed for international help, saying the epidemic was undermining health systems.
Wilfredo Ordonez, who has harvested corn, sesame and rice for more than 30 years in the Bajo Lempa region of El Salvador, was hit by the chronic disease when he was 38. Ten years later, he depends on dialysis treatments he administers to himself four times a day.
"This is a disease that comes with no warning, and when they find it, it's too late," Ordonez said as he lay on a hammock on his porch.
Many of the victims were manual laborers or worked in sugar cane fields that cover much of the coastal lowlands. Patients, local doctors and activists say they believe the culprit lurks among the agricultural chemicals workers have used for years with virtually none of the protections required in more developed countries. But a growing body of evidence supports a more complicated and counterintuitive hypothesis. More >>
Publicado por Unknown en 2/12/2012 10:34:00 a. m. No hay comentarios: Enlaces a esta entrada

By: Cliff Kincaid
Accuracy in Media

While the U.S. media remain preoccupied with unsubstantiated sexual harassment allegations against Herman Cain, America is losing Nicaragua to the communists—again. The blatant stealing of the election in this Central American country has been ignored by headlines in the press proclaiming that Daniel Ortega won re-election in a landslide. The Obama Administration, which has encouraged the “Arab Spring” process that has resulted in Islamists making gains in the Middle East, has refused so far to condemn the theft of democracy in Nicaragua.
Ortega, an accused sexual child abuser, and his communist comrades in the Sandinista movement took power in 1979 with the help of Democratic U.S. President Jimmy Carter, who said Americans had an inordinate fear of communism. Carter cut aid to the pro-American Somoza regime in Nicaragua and then proposed foreign aid for the Sandinistas. Carter also lost Iran to the fanatical Mullahs on the verge of acquiring nuclear weapons.
In 1990 the Sandinistas were forced to cede power and hold free elections, which they lost, in the face of a military insurgency led by the Contras, Nicaraguan freedom fighters supported by Carter’s successor, Republican President Ronald Reagan. But Ortega and his backers never went away, subverting the democratic process through infiltration, fraud and theft. They have been aided and abetted by foreign aid from Hugo Chavez of Venezuela.
More >
Publicado por Unknown en 11/09/2011 01:53:00 p. m. No hay comentarios: Enlaces a esta entrada 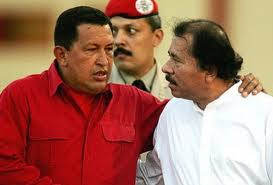