Secrets of the Cyprus heist

Lilley’s Pad
Brian Lilley
I started asking on Monday, and again on Tuesday, whether the confiscation of money from private bank accounts could happen in Canada the way it has happened in Cyprus. My argument was that yes it could, especially given that Cyprus is a modern European nation and that the decision to dip into accounts was made by finance ministers and officials from countries such as Germany, France and Italy.
This was not a Robert Mugabe theft of cash. If it can happen there then it can happen here.
Little did I know that the answer was already in the budget on page 145 (155 of the PDF).

This risk management framework will limit the unfair advantage that could be gained by Canada’s systemically important banks through the mistaken belief by investors and other market participants that these institutions are “too big to fail.”

“Bail-in” is exactly how Eurozone officials described what happened in Cyprus (details here and here). In order for the country to get the bail-out from the EU, the banks needed to get a bail-in from their depositors. At first this meant every depositor and then just those with deposits over €100,000.
I asked officials from Finance Minister Jim Flaherty’s for comment on what this section means to them, here is the response from Flaherty’s Director of Communications Dan Miles.

No denial in there that depositors will be asked to pay up if Canadian banks fail. Some think that is a probability that will never happen but obviously the Finance Department thinks it could happen or it would not devise rules. The Big Six Banks were also recently told to up their capital requirements to prevent failure.
So unless Miles is not telling me something, the new regime in Canada is that deposits up to $100,000 will be insured through the Canada Deposit Insurance Corporation and anything else that you hold with a single bank will be up for grabs if that bank fails.
On one level it makes sense to say those who invested in the bank should be the ones who bail it out and not taxpayers. No one wants taxpayers to fund the bail out of big banks.
But is this what most people expect from their bank?
And what exactly would be up for grabs? Would a bank account with $150,00 in life savings see a good part of it seized? What about an RRSP I’ve built up through my bank for retirement? Having more than $100,000 in an RRSP is not out of order for a good saver or a self-employed person who needs to look after their retirement needs on their own.
And what about business accounts at that point, accounts that need to meet payroll?
As Jonathon Chevreau from Moneysense told me on Tuesday, diversify, diversify, diversify.
Canada has a new regime for possible bank failure and it looks exactly like Cyprus. One of our major banks failing may be unlikely but that doesn’t mean it is impossible.
Publicado por Unknown en 3/30/2013 03:57:00 p. m. No hay comentarios: Enlaces a esta entrada

Is Canada the next Cyprus?

It’s Good Friday and a government holiday in Ottawa.
No point trying to reach Canadian Finance Minister Jim Flaherty today.  So rather than wait until Monday, Canada Free Press (CFP) is posing this cliff-hanger question:
“Is that a Cyprus-style “Bail In” proposed in the newly-minted 2013 budget?”
That’s what economic gunslingers on both sides of the border and dozens of letters to the editor are charging.
What began as a rumble is growing into an ear-splitting cacophony—and the Canadian government should post a truthful, detailed and in-plain-English explanation on its website.
If Canada is going the same direction as Cyprus and the European Union, we need to know as soon as possible.
The concept of a Canada taking money from unknowing bank depositors is not just within the realm of hysteria and hype.
Not when Page 144 of the 2013 Canadian budget states: “The Government also recognizes the need to manage the risks associated with systemically important banks—those banks whose distress or failure could cause a disruption to the financial system and, in turn, negative impacts on the economy.  This requires strong prudential oversight and a robust set of options for resolving these institutions without the use of taxpayer funds, in the unlikely event that one becomes non-viable.
Keep reading on  canadafreepress >>
Publicado por Unknown en 3/29/2013 05:59:00 p. m. No hay comentarios: Enlaces a esta entrada

Now is Cyprus - Bailout may equal half its economy 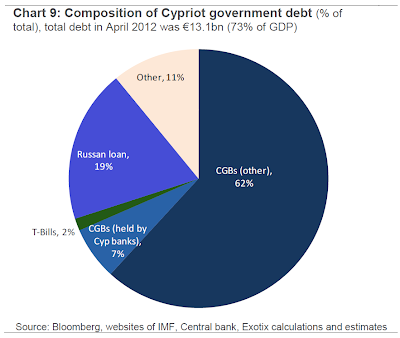 NICOSIA — Cyprus, the fifth euro zone country to seek emergency funding from Europe, may need a bailout of up to 10 billion euros — over half the size of its economy — officials said on Tuesday.
The Mediterranean island, with a banking sector heavily exposed to debt-crippled Greece, said on Monday it was formally applying for help from the European Union's rescue funds.
Cyprus is the euro zone's third smallest economy but it joins Greece, Ireland, Portugal and Spain in seeking EU rescue funds to try and stay afloat, and is the latest sign that policymakers have failed to stop the debt crisis spreading.
European leaders will meet at a summit on Thursday and Friday but they are not expected to come up with a lasting solution to the region's problems that have also sent Italy's borrowing costs soaring.
Exact amount undecided Two euro zone officials said that a package of up to 10 billion euros was being considered for the 17.3 billion euro Cyrpriot economy.
"The exact number has not been decided yet. It was to be 6 billion for the state financing and 2 billion for the banks but that is optimistic — it is more likely to be seven and three — up to 10 billion euros in total," one euro zone official said.
A second official confirmed the amount was likely to be up to 10 billion euros, a massive bill for Cyprus.
Publicado por Unknown en 6/26/2012 08:54:00 a. m. No hay comentarios: Enlaces a esta entrada