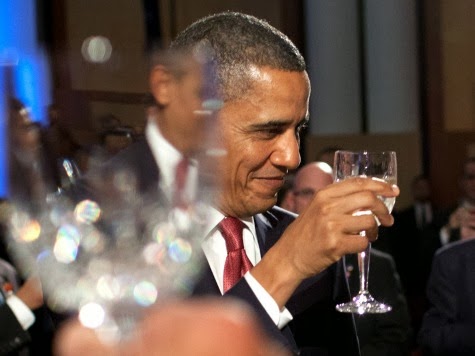 The Obama administration has mastered inventing bogus new exemptions in the Freedom of Information Act (FOIA) law. There is the infamous “spiking the football” exemption (AKA the “offending the terrorists” exemption) that I referenced recently that was used to keep the bin Laden death images secret. Unfortunately, the courts bought that one.

Then there is the embarrassment exemption. We’ve seen this one employed on too many occasions to count. Any records that might cause damage to the image of the president and his administration are held under lock and key.
That’s why Judicial Watch has had to fight so hard to obtain the administration’s vacation travel records. Thanks to our investigations team, we’ve been extremely successful in breaking through the Obama stonewall in order to tally the cost to the American taxpayer of these personal trips. We recently did it again.
JW released U.S. Secret Service records from the Department of Homeland Security detailing expenditures of $295,437.04 by President Obama, First Lady Michelle Obama, and Vice President Joe Biden during separate luxury vacations over the 2013 Presidents’ Day Weekend. A separate group of documents shows that taxpayers paid more than $1,000,000 for Michelle Obama’s controversial 2011 trip to South Africa and Botswana.
President Obama spent the Presidents’ Day Weekend (February 15-18) on a golf trip in West Palm Beach, Florida. First Lady Michelle Obama and her daughters spent the same holiday weekend on a ski trip in Aspen, Colorado. Vice President Biden and his family spent that weekend skiing in Aspen.
Once again, we had to sue for these records, filing a FOIA lawsuit on June 21, 2013, against the U.S. Secret Service. According to the billing records, here’s the bang you got for your taxpayer buck:

Additionally, even though we filed our lawsuit back on October 4, 2011, we are just now getting records detailing the full costs of the June 21-27, 2011 trip taken by Michelle Obama, her family, and her staff to South Africa and Botswana.
According to this most recent batch of records obtained from the United States Air Force, during the six-day trip the First Lady and her entourage spent $668,702.01, including hotel and lodging costs of $430,614.18. The trip ended with a private family safari at a South African game reserve.
This $668,702.01 expenditure was in addition to the $424,142 taxpayers were billed for the cost of the flight and crew, according to earlier documents obtained by Judicial Watch, bringing the total cost of the trip over $1 million.
After all of our litigating and investigating these travel records, this much is clear: The Obamas and Vice President Biden do not seem to care a whit about sticking taxpayers with the bill for their vacation travel. However, they care very much about keeping these costs secret. The stonewalling over releasing these travel numbers suggests that the Obama administration is embarrassed by the personal travel of President Obama and Vice President Biden. And rightly so.
Embarrassment is not a valid reason to exempt documents from disclosure. In fact, quite the opposite. Often the most embarrassing documents shed light on the most egregious abuses of the public trust. This is the very reason for FOIA law: to allow the American people to know the government’s business so that corrupt and abusive activities can be exposed and discouraged.
Judicial Watch President Tom Fitton is author of the NY Times best-seller “The Corruption Chronicles” and executive producer of the documentary “District of Corruption.”
Publicado por Unknown en 1/30/2014 05:53:00 p. m. No hay comentarios: Enlaces a esta entrada

The New American/ By Bob Adelmann

The Mackinac Center for Public Policy just released a study showing that by the time all federal and state loans, grants, subsidies, and tax credits are figured in, each Chevy Volt costs taxpayers upwards of $250,000.
James Hohman, the center’s assistant director of fiscal policy, counted a total of 18 government “deals” but didn’t include the fact that one-quarter of Volt’s manufacturer, General Motors, is owned by the federal government.
He counted not only incentives offered directly to GM or to the ultimate buyer, but also those offered to suppliers of parts and technology for the Volt. The Department of Energy, for example, awarded a $106 million grant to GM’s Brownstone plant that assembles the Volt’s batteries. The State of Michigan awarded $106 million to GM to retain jobs in its Hamtramck assembly plant. And Compact Power, the company that makes the Volt’s batteries, received $100 million in “refundable battery credits.”
Some of the subsidies and credits are extended over varying periods of time and some are dependent upon certain production “milestones” being achieved. He counted them all along with subsidies to companies vying to provide batteries for the Volt such as the support provided to A123 Systems. A123 lost the battery contract to Compact Power, but Hohman included their subsidies in his study as well.
The total of all subsidies, grants and credits is $3 billion: $2.3 billion in federal money and $700 million in Michigan’s money. That’s enough to purchase 75,000 Volts at the current sticker price of $39,000.
A GM spokesman, Gary Martin, responded to Hohman’s study by declaring that there is nothing wrong with government subsidies as everyone else is doing it. In fact, these subsidies for the Volt are “much less than the hundreds of billions of dollars that Japanese and Korean auto and battery manufacturers have received over the years [and these ‘investments’] provided … match the foresight and innovation that other countries are exhibiting.”
Unfortunately, GM has only been able to sell 6,000 of them since they were introduced last December, despite rave reviews from Edmunds and Consumer Guide. According to USNews’ Ranking and Reviews, “The 2012 Chevrolet Volt ranks 1st out of 21 Upscale Midsize Cars…. Reviewers agree that the 2012 Chevrolet Volt is one of the best hybrid cars on the market, thanks to its impressive fuel economy.”
In spite of promises made in September that GM wouldn't have "any problem reaching our goal [of 10,000 units for
the year]" by GM spokesman Rob Peterson, total sales as of December 19 were 5,816, more than 4,000 units short. And this despite purchases by General Electric and other fleet sales to cronies of the Obama administration.

It just goes to show there are certain folks [in Washington and Lansing] who will spend anything to get their vision of what people should do. It’s a glaring example of the failure of central planning trying to force citizens to purchase something they may not want…. They should let the free market make those decisions.
Publicado por Unknown en 12/23/2011 01:03:00 p. m. No hay comentarios: Enlaces a esta entrada