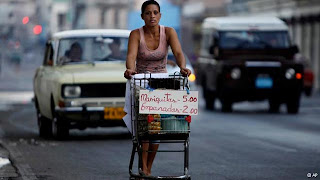 * Private sector jobs double in 2 years
* State jobs slashed 5.7 percent in 2012
* Unemployment and informal work grows
By Marc Frank
HAVANA, Dec 27 (Reuters) - Cuba's drive to slash state payrolls and spur private-sector growth picked up surprising steam in 2012 as President Raul Castro moved ahead with reforms to the Soviet-style economy, according to figures unveiled recently with little hoopla.
The number of private or "non state" workers rose 23 percent in 2012, while state sector employment dropped 5.7 percent, according to a report from Economy Minister Adel Yzquierdo Rodriguez. The unemployment rate grew to a record 3.8 percent, not including Cubans who did not seek work.
The wide-ranging year-end report to the National Assembly, which met in Havana last week, indicated the government is quietly making progress toward its goal of moving toward a more market-oriented economy while maintaining the socialist system in place the last half century.
Just a few years ago, the state employed more than 85 percent of Cuba's labor force, but that is changing as the government battles heavy indebtedness, economic stagnation, poor retail services and pilfering.
The report said the government cut 228,000 public jobs in 2012, on top of the previously announced 137,000 in 2011, closing in on its goal to slash 20 percent, or nearly a million jobs, from its bloated payrolls, by 2016.
At the same time, the number of private, or "non-state" workers as Cuba calls them, rose to 1.1 million jobs, double the number reported two years ago.
The majority of the non-state workers, or about 610,000, were farmers, whose numbers have grown under Castro's agricultural reforms, which include leasing state lands to individuals. The goal is to stimulate local food production and cut the need for budget-draining food imports.
The rest of the non-state workers are mostly in small retail businesses or self-employed such as carpenters, seamstresses, photographers and taxi drivers.
RUNNING THEIR OWN BUSINESS
The cash-strapped state is closing thousands of its small retail outlets such as barbershops and cafeterias, notorious for economic inefficiency and employee theft, and offering to lease the premises to employees or others interested in running their own business.
Starting in 2013 the state plans to turn more than 200 medium-sized businesses, from shrimp breeding and produce markets to construction and light manufacturing, into private cooperatives. The experiment will be expanded if successful.
Yzquierdo reported that unemployment was a record 3.8 percent in 2012, or a bit more than 250,000 out of a potential labor force of 6.8 million people. He admitted that the figure did not include a million Cubans who he said "did not actively seek employment."
Cubans often complain that the communist island, with its wide-ranging social benefits, is a place where too many live off the dole, a situation Castro has complained about in a number of speeches and vowed to change. 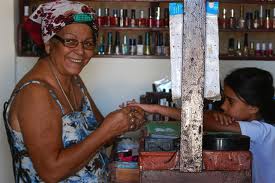 "Our state cannot and should not continue maintaining companies, productive entities, services and budgeted sectors with bloated payrolls (and) losses that hurt the economy, are counterproductive and form bad work habits," a trade union federation statement said in 2010, when plans were first announced to push state employees into the "non-state" sector.
Many of those without jobs still enjoy free health care, education, subsidized food ration and other government services while also dealing in Cuba's vast black market, engaging in minor business activity and trading on the margins of the law.
Clara, a 36-year-old Havana resident, was laid off two years ago from her job as a secretary for a state-run security company, given one month's pay, another month of unemployment benefits and then left to fend for herself.
Instead of looking for another job, she decided to do manicures and hair styling, working under the radar without getting the small-business license required by the state.
Clara said she charged 24 pesos (1 dollar) for a manicure and about the same for hair styling, and brought home maybe 500 pesos, or about $20 per week.
That is considerably more than the $15 a month she earned with the government, but not enough to get legal.
"I only do my friends and as far as I'm concerned make too little to go through all the bother of registering my business and paying taxes," she said.