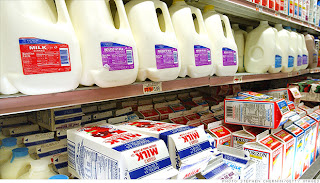 With Congress spending all its time trying to avert the fiscal cliff, a slew of other legislative matters are going unattended. One of them is the agriculture bill which, if not addressed, could lead to a doubling of the price of milk early next year.
It works like this: In order to keep dairy farmers in businesses, the government agrees to buy milk and other products if the price gets too low. The current agriculture bill has a formula that means the government steps in if the price of milk were to drop by roughly half from its current national average of about $3.65 a gallon.
Problem is, the current bill expired last summer, and Congress had been unable to agree on a new one. Several protections for farmers have already expired, and several more are set to do so over the next few months. One of them is the dairy subsidy, which expires January 1.
But instead of leaving farmers entirely out in the cold, the law states that if a new bill isn't passed or the current one extended, the formula for calculating the price the government pays for dairy products reverts back to a 1949 statute. Under that formula, the government would be forced to buy milk at twice today's price -- driving up the cost for everyone.
"If you like anything made with milk, you're going to be impacted by the fact that there's no farm bill," U.S. Secretary of Agriculture Tom Vilsack told CNN's Candy Crowley in an interview on State of the Union airing Sunday, Dec. 30.
"Consumers are going to be a bit shocked when instead of seeing $3.60 a gallon for milk, they see $7 a gallon for milk. And that's going to ripple throughout all of the commodities if this thing goes on for an extended period of time," Vilsack said.
Related: Independent farms rake in millions
Sky-high milk prices wouldn't necessarily be good for dairy farmers either, according to Chris Galen, a spokesman for the National Milk Producers Federation, which represents over 30,000 dairy farmers.
While it might provide a short term boost to profits, there's a fear that consumers would either cut back on dairy or opt for imported dairy products. It could also force food makers to search for alternatives to dairy, like soy.
"We call it the dairy cliff," Galen said.
Fortunately, there's still time for Congress to act.
Galen said the government would have to issue a notice saying it was going to pay the increased price for dairy products, then set up a schedule for when purchases would start, a process that could take a few weeks.
"It's not like people would dump blocks of cheese on the USDA's front lawn January first," he said.
Publicado por Unknown en 12/22/2012 01:17:00 p. m.