Obama’s One Hand Clap With Castro 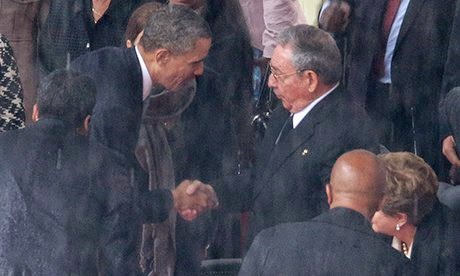 By Doug McIntyre in The Daily Beast:

Obama’s One Hand Clap With Castro

There was really only one good reason to maintain the embargo: Trade with Cuba strengthens the Castros. So what, exactly, are we getting in return for Obama’s radical step?

“No cerveza, no trabajo” is about all I’ve retained from Brother Victor Serna’s Spanish II class at St. Mary’s High School.

Of course it’s been over 40 years, and that’s a long time to remember anything. But truth be told, I never came close to mastering the language despite my excellent grades.

I did not deserve them.

While I accepted every A- and B+ as a gift from the school gods, Brother Victor Serna was forever chastising me for slacking off from my “usual” stellar A/A+ efforts.

Brother Victor had taught my brother, Jeff, the previous year with far greater success. After years at the head of a parochial school classroom, he could no longer distinguish one blond Irish Catholic kid from another. I coasted through Spanish II on Jeff’s stellar effort.

What I won’t ever forget were Brother Victor’s periodic anti-communist tirades. His face a brilliant crimson, neck veins bulging and spittle flying, he looked like America’s most famous Cuban, Ricky Ricardo, after Lucy had pissed him off and left him sputtering in his native tongue.

A Spaniard by birth, Victor Serna left home shy of his 14th birthday and entered the monastery to become a Marist brother. By 1943, he was missioned to Cienfuegos, Cuba.

In 1950, Serna earned his Ph.D. from the University of Havana, where he had befriended a classmate named Fidel Castro.

By 1961 Castro had seized power and Serna publicly criticized his old friend for his regime’s barbaric suppression of individual and religious rights. This courageous act earned him a late-night knock on the door with orders for Serna to vamos from Cuba. He had 24 hours to pack.

It’s fair to ask exactly what we got other than the return of Alan Gross. Right now it looks like the diplomatic equivalent of one hand clapping.

“I do not believe we can keep doing the same thing for over five decades and expect a different result,” said President Obama as he announced his intention to undo the policy of isolation followed by the previous 10 presidents.

Closer to home, the reaction has been mixed.

With the midterm elections safely in the rearview mirror, Obama is on legacy patrol.

The Affordable Care Act is safely embedded, with repeal unlikely even with a freshly minted Republican Senate. His executive order granting work privileges and immunity from deportation for millions of undocumented immigrants may be headed to court, but not any time soon. Now he’s taking a radical new approach to the hemisphere’s only Stalinist government.

It’s hard to argue for the continuation of the U.S. embargo of Cuba. If the embargo were effective, the Castro brothers would have been doing Love Letters with the Duvaliers years ago. We trade with China and Vietnam, so why not Cuba, right?

Well, here’s one big reason to continue the embargo: Trade with Cuba strengthens the regime.

The Cuban government siphons off revenue from nearly every business transaction in the country. Until 2011, barbers were employees of the state. While cruise ship companies would like nothing more than to add Havana to their ports of call, the people of Cuba will still be paid a pittance. The average Cuban makes between $20 and $50 a month.

That’s not a typo.

On the upside, we’re likely to get better jazz, slick fielding middle infielders, and an army of great mechanics.

Granted, we’ve been waiting for half a century for the Cuban economy to collapse.

It hasn’t. Not even after its parent company, the Soviet Union, took a dive in 1991.

Obama has latched on to the failure of the embargo to topple the Castros as justification to shuffle the deck. But does he really want the Castos toppled? If so he has yet to say so publicly.

What he has said publicly is an apology for colonialism, something we are not guilty of in Cuba. The only other thing he has offered is vague boilerplate about a more “open” Cuba in the future after exposure to “American values.”

But the blunt truth is that nothing we do will free the Cuban people as long as they are subjugated by a thuggish government modeled on Stalin’s police state. Our secret weapon may be the hardening of Fidel’s and Raul’s arteries.

Poverty in the Caribbean worker’s paradise is not the result of America’s embargo. It’s the result of decades of draconian socialism.

While the president correctly points out that the United States is the only country with an embargo on Cuba, he misses the obvious point: If the Cubans are free to trade with the rest of the world, why aren’t they driving Subarus and Fiats?

Canada, Mexico, China, Japan, Germany, France, and every other nation on earth does business with Cuba, but the people there are still driving ’56 DeSotos, and many lack Internet access and nearly every other tool of the modern world. The reason? Fidel and Raul Castro.

Obama’s gambit is not irrational. Insanity, after all, is doing the same thing and expecting a different result, right? But the president’s new policy is naive.

For all his gifts, Obama has had one consistent glaring blind spot: He’s a terrible judge of tyrants. The Castros are the latest in a long line of despots he believed he could negotiate with.

From Vladimir Putin to Hosni Mubarak to Bashar al-Assad and the Kim du jour in North Korea, Obama seems the last person to recognize the monstrous evil these thugs represent.

It’s fair to ask exactly what we got in the president’s bargain with Cuba other than the return of Alan Gross. Right now it looks like the diplomatic equivalent of one hand clapping.

While the days of exploding cigars are happily behind us, the iron grip of an intolerant despot has not and is not likely to loosen under Obama any more than it did in the days of JFK.
Publicado por Unknown en 12/26/2014 03:53:00 p. m.