CNN.com
By Euan McKirdy
(CNN) -- Two former top leaders in Cambodia's notorious Khmer Rouge, which ruled the Southeast Asian country between 1975 and 1979, were found guilty of crimes against humanity by a specially-convened Cambodian court Thursday.
Before the verdict, only one person had been brought to justice over one of the 20th century's great atrocities.
Nuon Chea, the former Deputy Secretary of the Communist Party of Kampuchea, and Khieu Samphan, the one-time President of Democratic Kampuchea were sentenced Thursday. Both received life sentences. 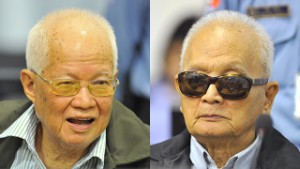 Nuon Chea [r], 88, known as "Brother Number Two," and Khieu Samphan [l], 83, known as "Brother Number Four," were expressionless as the verdict was read.
They were found guilty of the following: Crimes against humanity, of extermination, murder, political persecution, and other inhumane acts comprising forced transfer, forced disappearances and attacks against human dignity committed within the territory of Cambodia between 17 April 1975 and December 1977.
"The chamber finds that as a consequence of the crimes of which the accused have been convicted, the civil parties and a very large number of additional victims have suffered immeasurable harm, including physical suffering, economic loss, loss of dignity, psychological trauma, and grief arising from the loss of family members and close relations," a judge said in the ruling.
The pair were taken into custody, where they have been held since their arrest in 2007. The defendants can appeal the judgment.
The charges were heard in Phnom Penh in the Extraordinary Chambers in the Courts of Cambodia (ECCC) -- a special United Nations-backed tribunal that was formed in 2006 to prosecute senior Khmer Rouge leaders and other regime figures responsible for especially heinous acts.
A bloody regime
The Khmer Rouge regime is believed responsible for deaths of at least 1.7 million people between 1975 and 1979.
The two men were senior leaders in the Khmer Rouge regime, which ruled Cambodia between 1975 and 1979. During that time at least 1.7 million people -- about a quarter of the Cambodian population -- are believed to have died from forced labor, starvation and execution, as the movement ruthlessly executed its radical social engineering policies aimed at creating a purely agrarian society.
An ongoing struggle for justice after Khmer Rouge
The pair were tried in a "hybrid" tribunal -- officially "an ad hoc Cambodian court with international participation" -- uses both Cambodian and international judges and staff employed by the U.N. in order to ensure the trials are conducted to international standards and to mitigate against the weakness of the Cambodian legal system.
Until today's conclusion, the ECCC has delivered only one verdict in its eight years of existence.
In the ECCC's Case 001, Kaing Guek Eav, commonly known by his alias, Duch, was sentenced to life imprisonment following his 2010 convictions for war crimes, crimes against humanity, murder and torture. He was the commandant of the notorious Tuol Sleng S-21 prison in Phnom Penh, where more than 14,000 people died.
The verdicts on Thursday in the case known as 002/01 was the first time that senior leaders of the regime have faced justice.
Publicado por Unknown en 8/07/2014 01:47:00 a. m.