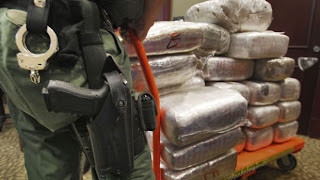 CHICAGO –  Mexican drug cartels whose operatives once rarely ventured beyond the U.S. border are dispatching some of their most trusted agents to live and work deep inside the United States -- an emboldened presence that experts believe is meant to tighten their grip on the world's most lucrative narcotics market and maximize profits.
If left unchecked, authorities say, the cartels' move into the American interior could render the syndicates harder than ever to dislodge and pave the way for them to expand into other criminal enterprises such as prostitution, kidnapping-and-extortion rackets and money laundering.
Cartel activity in the U.S. is certainly not new. Starting in the 1990s, the ruthless syndicates became the nation's No. 1 supplier of illegal drugs, using unaffiliated middlemen to smuggle cocaine, marijuana and heroin beyond the border or even to grow pot here.
But a wide-ranging Associated Press review of federal court cases and government drug-enforcement data, plus interviews with many top law enforcement officials, indicate the groups have begun deploying agents from their inner circles to the U.S. Cartel operatives are suspected of running drug-distribution networks in at least nine non-border states, often in middle-class suburbs in the Midwest, South and Northeast.
"It's probably the most serious threat the United States has faced from organized crime," said Jack Riley, head of the Drug Enforcement Administration's Chicago office.
The cartel threat looms so large that one of Mexico's most notorious drug kingpins -- a man who has never set foot in Chicago -- was recently named the city's Public Enemy No. 1, the same notorious label once assigned to Al Capone.
The Chicago Crime Commission, a non-government agency that tracks crime trends in the region, said it considers Joaquin "El Chapo" Guzman even more menacing than Capone because Guzman leads the deadly Sinaloa cartel, which supplies most of the narcotics sold in Chicago and in many cities across the U.S.
Years ago, Mexico faced the same problem -- of then-nascent cartels expanding their power -- "and didn't nip the problem in the bud," said Jack Killorin, head of an anti-trafficking program in Atlanta for the Office of National Drug Control Policy. "And see where they are now."
Riley sounds a similar alarm: "People think, `The border's 1,700 miles away. This isn't our problem.' Well, it is. These days, we operate as if Chicago is on the border."
Border states from Texas to California have long grappled with a cartel presence. But cases involving cartel members have now emerged in the suburbs of Chicago and Atlanta, as well as Columbus, Ohio, Louisville, Ky., and rural North Carolina. Suspects have also surfaced in Indiana, Michigan, Minnesota and Pennsylvania.
Mexican drug cartels "are taking over our neighborhoods," Pennsylvania Attorney General Kathleen Kane warned a legislative committee in February. State Police Commissioner Frank Noonan disputed her claim, saying cartels are primarily drug suppliers, not the ones trafficking drugs on the ground.


"If you put the federal government in charge of the Sahara Desert , in five years ther'ed be a shortage of sand" - Milton Friedman