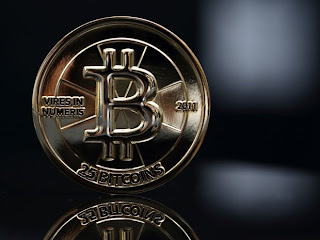 John Greenwood
Joseph David has overcome a lot of challenges since starting up Canada’s first Bitcoin exchange two years ago but his latest hurdle is proving tougher that all the others.

Over the last few days two of the pretenders to the world currency throne — bitcoin, the new high-profile digital currency, and gold, the centuries-old commodity currency — have fallen into a tailspin.
Virtex, based in Calgary, is an online market that matches Bitcoin buyers with sellers, with about $13-million of trades under its belt.
But earlier this month Royal Bank of Canada quietly informed Mr. David that it would no longer do business with his company.
“They shut down our account without any reason,” said Mr. David, an ebullient entrepreneur with a background in technology companies. “They just said we have the right to refuse service to whomever we wish.”
For whatever reason, many in Canada’s small but fast growing Bitcoin community are suddenly dealing with the same problem: The banks have decided they don’t like the cryptocurrency and they’re shutting down some of the accounts of businesses that deal in it.

That the closing of conventional bank accounts could be a problem may sound counter-intuitive, since Bitcoin is supposed to be an alternative currency designed to operate outside of the conventional banking system. But in practice Bitcoin holders are constantly swapping back and forth into real dollars — partly because of volatile nature of the currency, which soared as high as $260 for a single Bitcoin after trading for years at less than $10, and partly because there’s not that much you can buy with it.
As a result, this latest move by the banks has thrown a monkey wrench into the nascent system.
“Only in Canada do you get a situation where a bank can shut down your account and you’re out of business,” said Melvin Ng, an engineering student at the University of Waterloo and the founder of what is likely the country’s newest bitcoin exchange, Cadbitcoin.
“Banks should certainly feel threatened by this new virtual currency, as Bitcoins will soon replace the need for banks to transfer money across borders,” Mr. Ng declared in a press release. “Bitcoin will revolutionize the banking industry, just like Bittorrent changed the video and music industry,” said Mr. Ng, comparing the currency to the super-fast and legally problematic peer-to-peer media downloading service.
A spokeswoman for RBC declined to comment on the matter, saying that the bank does not comment on individual clients.
Meanwhile the Canadian Bankers Association said it has no position since Bitcoin “is essentially an electronic currency that operates outside of the traditional national currency system.”
The Bank of Canada also has yet to take an official position, said Dale Alexander, a spokesman for the central bank. But in an emailed statement he went on to quote the Currency Act which defines legal tender as any bills or coins issued under the auspices of the Bank of Canada or the Royal Canadian Mint. The note also included a link to a European Central Bank study warning that virtual currencies such as Bitcoin are “inherently unstable,” “not regulated or closely supervised,” and “could have a negative impact on the reputation of central banks.”
As critics point out the currency has been extraordinarily volatile, with the value of a single Bitcoin ranging from less than $1 back in 2008 when it was first created to as much as $260 earlier this month. There have been several major corrections but each time it has recovered. That’s because enthusiasts refused to give up on the market, and the faithful will likely rush to buttress their virtual tender again if there’s another correction.
Bitcoin has no shortage of proponents.
“Bitcoin and similar electronic currencies have great advantages,” said Finn Poschmann, vice president of research at the C.D. Howe Institute. “First is that they are electronic — they can be easily exchanged, at low cost. Moreover, they can be exchanged among people and between people and businesses without the infrastructure associated with debit and credit cards, or wire transfers.”
Such currencies also come with “potentially great risks,” Mr. Poshmann cautions, adding that it is the job of regulators and monetary authorities to address those risks.

George Frey/Bloomberg
As critics point out the currency has been extraordinarily volatile, with the value of a single Bitcoin ranging from less than $1 back in 2008 when it was first created to as much as $260 earlier this month.
Bitcoin is only the latest in a string of virtual currencies, from the Linden Dollars used in the on-line game Second Life, to mobile phone air time units used as money by a large part of the population in Kenya and Tanzania.
The brainchild of a possibly fictitious Japanese software engineer, Bitcoin first emerged in 2009, just as the global financial system was being pushed to the brink. Unlike conventional money, it’s not controlled by any central bank or any other central authority and it exists only electronically. Instead it’s controlled by peer-to-peer software, like Bittorrent and other media file-sharing systems.
The whole thing is run by powerful computer systems owned by people called “miners.” They keep the ledgers, recording every transaction that takes place and as a reward, they get periodic payments of Bitcoin.
One of the big advantages is that it’s resistant to the kind of tampering that happened in the aftermath of the financial crisis that saw central banks pumping out huge quantities of new money as a way to revive ailing banks. Critics charge that such moves will ultimately result in inflation, devaluing the holdings of countless individual savers.
Another advantage is that the cost of doing transactions is a lot less than, say, with a credit card where the issuer charges around 3% each time the card is swiped. Such fees are the lifeblood of the banking system but they are significantly reduced because Bitcoin purchases don’t require a middleman.
To get Bitcoin you need to go to an exchange like Mr. David’s Virtex, or maybe you will opt for Mt. Gox, the world’s biggest Bitcoin exchange. There you can use Canadian dollars to buy Bitcoin which is sent electronically and stored on your laptop hard drive.
And over the past few months, a lot of people have been doing that, rapidly driving up the value of Bitcoin. But as a true currency it’s got a ways to go as there’s not a lot of retailers that accept it, at least not yet.
But the supporters are a determined lot, and the lack of stuff to buy doesn’t appear to be a problem. Most appear happy to sit on their hoards until the value goes up and then swap back into dollars to lock in their gains. Owing to white-knuckle volatility, that strategy hasn’t worked for everyone but clearly some are doing very well by it.
Paul Chavady, a real estate agent in Saskatoon, said he began offering services in Bitcoin after getting calls from potential customers who want to buy some bricks and mortar for their virtual spoils.
Tomohiro Ohsumi/BloombergCritics say the rise of bitcoin is also being helped by secrecy.
“We were getting all these inquiries from people who made a lot of money in bitcoin and they were enquiring about buying a house,” said Mr. Chavady. “It’s something that’s picking up. “
So far support for Bitcoin has come from a small community of tech-savvy evangelists and hipsters, but it’s rapidly growing thanks to the sharp rise in value.
Mike Caldwell, a 35-year-old software developer from Utah, is part of the unusual breed of Bitcoin entrepreneurs.
Mr. Caldwell manufactures physical Bitcoins, churning out thousands of the gold-coloured tokens which he claims cannot be counterfeited due to his tamper-proof holographic technology. The notion of a physical manifestation of a virtual currency may seem a bit odd, but he claims demand is so high that he’s created 17,000 coins since launching the business a year and a half ago and he’s only taking on new customers by invitation.
Critics say the rise of Bitcoin is also being helped by secrecy. The fact that transactions are anonymous makes Bitcoin the perfect system for drug dealers and other criminals, they say. Indeed, that’s become one of the major arguments against the currency.
James Grant, owner of the Ottawa-based Bitcoin brokerage Canadian Bitcoins, scoffs at that. Transactions with physical cash are just as anonymous, he argues.
He too has had his bank account shut down and he’s furious about it. The bank “didn’t give us a reason, but I could see them being worried about money laundering. If they had asked, we have invoices and receipts [for all our transactions]. We could have given them all those things… I believe in Bitcoin for the long term.”
Publicado por Unknown en 4/27/2013 04:37:00 p. m.