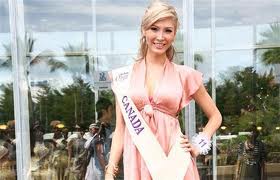 Jenna Talackova is a tall, striking blonde with model looks and the poise of a beauty queen.
Pageant organizers thought so too. That's why they put the 23-year-old Vancouver native on the roster for the upcoming Miss Universe Canada competition this May.
But, as CTV News reports, Miss Universe Canada officials changed their tune when they learned Talackova was born a male and disqualified her from the pageant.
Talackova started hormone therapy at 14 and underwent gender reassignment surgery in 2010.
She claims she's known she was a female since age four and has always identified as such.
Since getting the boot, the 6'1" model has spoken out about her plight, calling it a "human rights issue" and saying she was "disappointed" by the pageant's decision. She plans to consult a lawyer this week.
"I will look to turn this situation into a positive so that other people in a similar situation are not discriminated against in the future," she said in a statement to CTV, later writing on her Twitter account that she's "not giving up."
Since she went public with her story, it has gone global, racking up feature articles everywhere from People magazine to England's Daily Mail.
Faced with mounting public scrutiny, Miss Universe Canada officials have stepped up to defend their decision.
"We have to have the facts straight. There is no discrimination here at all," national director Denis Davila told CTV News. "You can look at it the way she wants to look at it … but we all have to follow the same rules."
Those rules state that every contestant must be a "naturally born female" — a stipulation that runs across the pageant franchise.
Davila said Talackova was not forthright about this qualification and claimed she lied on her application, skirting around the issue until asked point blank by an organizer.
"She was dishonest," Davila said, adding that he was sorry to see her go.
"It's really unfortunate that we had to pull her out of the competition … But the truth of the matter is that we have a set of rules that we must enforce," he said. "We love Jenna. We embrace diversity. In Miss Universe Canada, we are all from different walks of life."
The controversy has raised debate in editorials, comment boards and beyond as to whether Talackova — or any transgendered individuals — should be allowed to compete in beauty pageants.
Pageant purists argue that rules are rules, while others have retorted that the amount of surgery Talackova has had compares in volume to that of some of her "naturally born female" competition.
For the transgendered community, however, Talackova has emerged as a symbol of their struggle for mainstream acceptance.
Jillian Page, an outspoken writer who has documented her transition from male to female, has started a petition demanding that Miss Universe Canada reinstate Talackova into the competition. At present, she had collected more than 20,000 signatures.
"There are no asterisks beside the gender designation on our birth certificates: mine says female. It doesn't say 'transgender,' it doesn't say 'transsexual.' It says female. Period!" she wrote.
In the meantime, Talackova's profile has been wiped from the Miss Universe Canada website.
Publicado por Unknown en 3/27/2012 01:09:00 p. m.