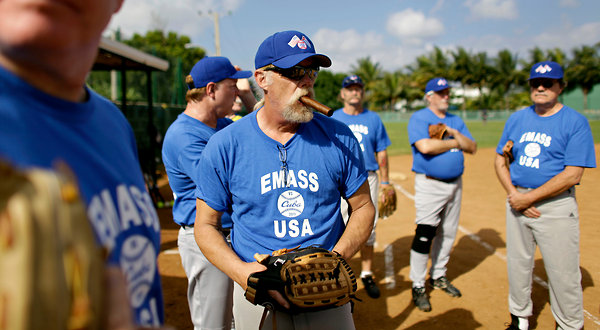 Javier Galeano/Associated Press, for The New York Times
Gary Buxton of the United States with his pregame cigar before playing a Cuban softball team in Havana this month.
By BRUCE WEBER
HAVANA — Wearing orange jerseys — T-shirts, really — the Cuban players lined up along the first-base line at Mella Field here. We were in blue, along third. All of us, both teams, held our caps over our hearts, and the Cuban National Concert Band played two national anthems, first the United States’, then Cuba’s, followed, for some reason, by “The Pink Panther Theme.”

Gary Buxton, right, of the United States, being tagged out by second baseman Eugenio Nerey  [former deputy Minister of Construction-Lg] of Cuba in a friendly softball game in Havana this month.
The two countries’ flags were unfurled side by side behind the pitcher’s mound, and everyone posed for pictures. Teófilo Stevenson, the former Olympic heavyweight champion and a member of the Cuban Olympic Committee, signed autographs. Gerardo Hernández, a deputy of the Cuban National Assembly, and John Caulfield, chief of mission of the United States Interests Section in Havana, America’s top envoy in Cuba, threw out ceremonial first pitches.
“The Cuban people love the North American people,” Hernández said to the players and a sparse crowd through an interpreter. “We welcome you with the love that you deserve.”
For his part, Caulfield congratulated the band for its rendition of “The Star-Spangled Banner.”
“It was wonderful to hear it played here,” he said. “That doesn’t happen very often.”
And then the games began.
So, the United States was clobbered by Cuba in an international softball competition in Havana last week.
What? Didn’t hear about it? Not even about my home run? Hmm ... well, here’s the scoop:
Two teams of Americans, 23 players total, 22 men and a woman, most from the Eastern Massachusetts Senior Softball League, known as Emass, average age somewhere north of 60 (at 58, I was a little brother), traveled to Cuba in mid-November to play seven games each against local clubs with rosters of equivalent vintage.
It was old guys versus old guys, in other words — an utterly unremarkable circumstance except, of course, that the games took place on the Communist island nation, 90 miles from Key West, whose relations with the United States have been stubbornly frozen for half a century, and which, officially anyway, remains our chilly, philosophical enemy.
It was not the first time that an American amateur sports team played in Cuba, and the two nations engaged in a professional baseball exchange when the Baltimore Orioles split a home-and-home series against a team of Cuban all-stars in 1999. But as far as anyone can confirm, the Emass teams, which have made four such trips to Cuba since 2009, are the only ones to make regular visits or play repeated series since Fidel Castro led the Cuban revolution and assumed power in 1959.
As an exercise in accidental diplomacy, the remarkable enterprise does not exactly rise to the level of the United States table tennis team being invited to China in 1971, a visit that initiated a thawing of relations between the two superpowers. For one thing, the fields, though perfectly adequate, were about what you would expect from a schoolyard, with hard dirt or scrubby infields and outfields with unruly grass and ruts to be aware of.
For another, the quality of the play was such that very few people cared to watch, and really, who were we? A bunch of older, not especially fit folks with balky joints and slack physiques, retired from or late in careers that are far from sporting. We were businessmen, teachers, musicians. We had an aviation consultant, a lawyer or two, an antiques dealer. Our intrepid distaff team member, Louise Felton, was a retired psychologist, and a pretty solid line drive hitter.
I had been invited to come along by a team member, Glenn Shambroom, one of my oldest friends, who was making his fourth trip to Havana, and not as a reporter, but as a left-handed-hitting outfielder. (I did not have a reporter’s visa and agreed to write only about softball-related events so as not to imperil relations between Emass and its Cuban hosts.) Anyway, the idea that our teams were representing our country as athletes — that I was — made me feel like one of those foolishly deluded characters in movies by Christopher Guest.
Nonetheless, as the opening ceremony made clear, a frisson of meaning hovered over games that would ordinarily have all the seriousness of a Sunday beer league. Michael Eizenberg, a player and an American organizer of the tournament, said it was no small thing, involving meeting after meeting with Cuban authorities over several years to arrange for the playing of the national anthem and the display of the American flag. More >
Publicado por Unknown en 11/25/2011 04:28:00 p. m.